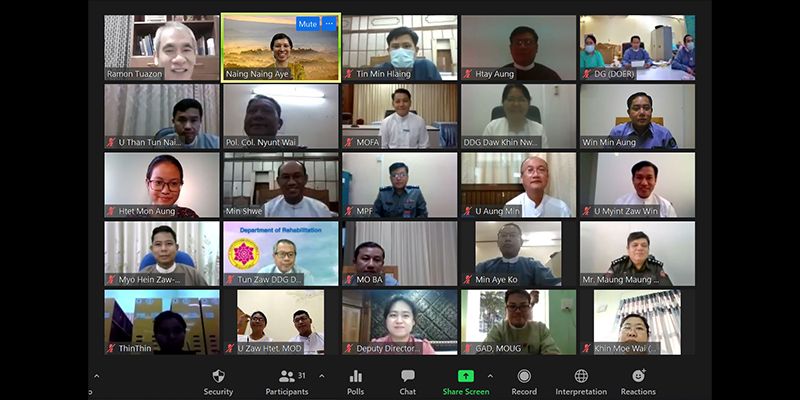 The Myanmar government is committed to address the issue of hate speech and all agencies are expected to contribute to this objective, Ministry of Foreign Affairs (MoFA) Permanent Secretary Mr, Chan Aye said in the opening of a three-day online seminar titled “Countering Information Disorder and Hate Speech for Government Officials” held from 3 to 5 November 2020.  The seminar was organized by MoFA in coordination with UNESCO Myanmar Office under the UN Peace Building Fund.

All government agencies should be mobilized in building trust and harmony among communities, he said. “The government has launched several initiatives to promote inter-communal cohesion, mutual trust and confidence-building among all communities and to deter hate speech through media,” Mr. Chan Aye added.

He also highlighted Presidential Directive No. 3/2020 entitled “Prevention of Incitement to Hatred and Violence”issued by President H.E. U Win Myint on 20 April 2020. The directive mandated all union ministries and regional and state governments as well as security forces to “take all possible measures to denounce and prevent all forms of hate speech”.

UNESCO Head of Office Ms. Min Jeong Kim said the goal of the seminar was to enhance the understanding of government officials on how disinformation and hate speech are perpetuated and to equip officials with media and information literacy (MIL) competencies to effectively counter deceitful practices affecting individuals and societies.

Thirty-four government officials from 17 ministries, including the judiciary, attended the online seminar. Among the topics discussed were how the disinformation system works; what is hate and hate speech; how to counter information disorder; international human rights law and standards in regulating free expressions; and model MIL programmes that promote acceptance, tolerance and pluralism.

The course introduced government officials to international human rights law and standards on regulating free expressions and hate speech. Among these are relevant provisions of the International Covenant on Civil and Political Rights (ICCPR); Johannesburg Principle; Camden Principles on Freedom of Expression and Equality; Rabat Plan of Action on the Prohibition of Advocacy of National, Racial or Religious Hatred that Constitutes Incitement to Discrimination, Hostility or Violence; and several statements from the Human Rights Committee.

UNESCO National Project Officer Ms. Naing Naing Aye discussed how social media had become a “driver of hate speech and extremism”. She added that too much dependence or even addiction to social media could have negative consequences including influencing behaviour and attitudes.

Commenting on current and future initiatives, Mr. Min Shwe, Deputy Director-General from the Ministry of the State Counsellor Office, suggested that similar initiatives include civil society organizations and should reach the grassroots level including districts and townships. Dr. Thin Thin Oo, Assistant Director at the Union Attorney General’s Office, said there was a need to reach out-of-school children and youth.

In his closing remarks, Director Mr. Ye Minn Thein of the International Organizations and Economic Department, MoFA, highlighted the need to enhance MIL competencies to harness the use of technology for the common good , create a safe digital environment, and to negate the misuse of technology. He also called upon participants to share the competencies gained from the course with their colleagues from other departments and ministries even as the MoFA plans related courses in the future in partnership with UNESCO.

Conveners and participants agreed that the three-day seminar was only the beginning and lessons shared should be sustained. From a whole-of-government approach, addressing information disorder, especially those which foment hatred, is emerging as a shared responsibility of all sectors in Myanmar. There is growing realization that everyone is responsible in establishing a nation built on truth, tolerance and diversity.