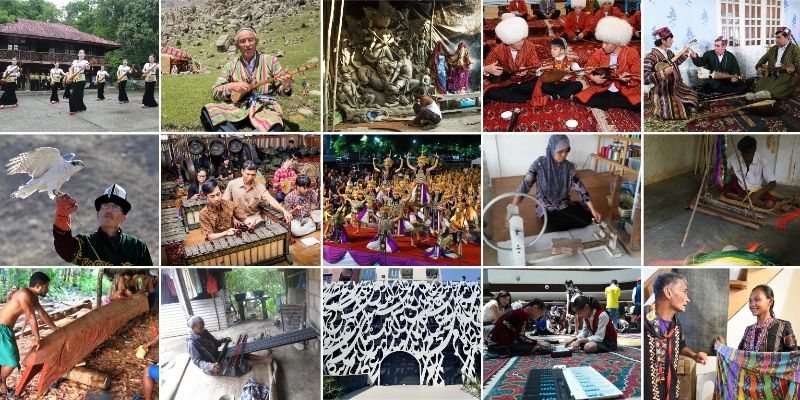 With this year’s additions of ICH elements, the UNESCO List of the Intangible Cultural Heritage of Humanity currently numbers 629 elements from 139 countries.

UNESCO’s Safeguarding of the Intangible Cultural Heritage in Asia-Pacific

This year’s new Asia-Pacific elements inscribed by the International Committee represent an array of intangible (i.e. ‘non-material’) cultural riches from a vast and diverse region in the Asia-Pacific, ranging from small island Federated States of Micronesia in the Western Pacific, to the mountainous regions of Tajikistan, Turkmenistan and Uzbekistan. They also extend from equally diverse cultural traditions from Mongolia to Sri Lanka.

Notably, regional projects presented by the Islamic Republic of Iran, Kyrgyzstan, and the Philippines were additionally inscribed to UNESCO’s ‘Register of Good Safeguarding Practices’. ICH elements of the Federated States of Micronesia and Timor-Leste were added to the ‘List of Intangible Cultural Heritage in Need of Urgent Safeguarding’. The International Committee also allotted US$172,000 from its Intangible Cultural Heritage Fund to a safeguarding project presented by Mongolia for its ongoing efforts to preserve its native folk dance of Biyelgee. Additionally, Southeast Asia was well recognized by this year’s ICH inscriptions, with new elements from Indonesia, Malaysia, Thailand and Viet Nam.

— Brief descriptions, alphabetized by inscribed name of the element, are provided herewith; please visit links, below, for further information. —

Art of Xòe dance of the Tai people in Viet Nam

Xòe is a form of Vietnamese dance that is performed at rituals, weddings, village festivals and community events. There are several types of xòe dances, but the most popular form is circle xòe, wherein dancers form a circle and perform basic movements that symbolize wishes for community health and harmony. An important identity marker for the Tai people in northwestern Viet Nam, the xòe dance is accompanied by various instruments, including gourd lutes, drums, cymbals and reed flutes. It is transmitted within families, dance troupes and schools.

Bakhshi is the performance of epic stories with the accompaniment of traditional musical instruments. The bakhshis (storytellers) recount heroic, historical and romantic epic poems based on myths, legends, folk tales and legendary chants. Bakhshi is a vital part of Uzbek lifestyle, and the storytellers are welcome guests in family ceremonies, rituals, public holidays and local festivities. The practice is passed on within families and through formal bakhshi schools.

Durga Puja is an annual festival celebrated in September or October, most notably in Kolkata, in West Bengal of India, but also in other parts of India and amongst the Bengali diaspora. It marks the ten-day worship of the Hindu mother-goddess Durga. In the months preceding the festival, small artisanal workshops sculpt images of Durga and her family using unfired clay pulled from the Ganga River. The worship of the goddess then begins on the inaugural day of Mahalaya, when eyes are painted onto the clay images to bring the goddess to life. It ends on the tenth day, when the images are immersed in the river from where the clay came. Thus, the festival has also come to signify ‘home-coming’ or a seasonal return to one’s roots. Durga Puja is seen as the best instance of the public performance of religion and art, and as a thriving ground for collaborative artists and designers.

Dutar is a traditional instrument and musical genre from Turkmenistan. The dutar instrument is a long-necked, two-stringed lute with a pear-shaped body covered by a thin wooden sounding board. The instrument is used in all of the main genres of Turkmen music and singing. As for dutar music, it can be played alone or accompanied by singing or poetry and prose. Dutar music is an essential part of Turkmen ceremonies, national celebrations, festivals and social gatherings.

Falak, meaning ‘heaven’, ‘fortune’ and ‘universe’, is the traditional folklore music of the mountain people of Tajikistan. The expressive and philosophical musical genre may be performed by a male or female soloist, a cappella, or with a single instrumental accompaniment or ensemble and dancers. Characterized by their high range, falak songs most often relate to love, pain, suffering and the homeland. The practice is viewed as a state of mind and an identity marker for mountain communities, and it is passed from one generation to the next within families and through formal education.

Falconry is the traditional art of training and flying falcons (and sometimes eagles, hawks, buzzards and other birds) practised by humanity in many places for over 4000 years. Originally a means of obtaining food, falconry has acquired other values over time and has been integrated into communities as a social and recreational practice, and as a way of connecting with nature. The modern practice of falconry focuses on safeguarding falcons, quarry and habitats, as well as the practice itself.

Gamelan refers to the traditional Indonesian percussion orchestra and to the set of musical instruments used. The ensemble typically includes xylophones, gongs, gong-chimes, drums, cymbals, stringed instruments and bamboo flutes. The music is played by men, women and children of all ages, and is typically used in religious rituals and public events. Gamelan is an integral part of Indonesian identity dating back centuries. Transmission is carried out in formal contexts in primary through to tertiary education, and in informal contexts such as within families and during workshops.

Nora is a centuries-old form of dance theatre and improvisational singing, usually based on stories about the Buddha or legendary heroes. Performers wear colourful costumes with headdresses, bird-like wings, ornate scarves, and swan tails that give them a bird-like appearance. Performed in local community centres and at temple fairs and cultural events, Nora is a community-based practice with deep cultural and social significance for the people of southern Thailand. Performances entail the use of regional dialects, music and literature to reinforce cultural life and social bonds.

Songket is a Malaysian fabric handwoven on a traditional, two-pedal floor loom. The decorative weaving technique used to make the fabric entails inserting gold or silver thread between the base threads so that they seem to float over a colourful background. The technique dates back to the sixteenth century, and it is passed on from mother to daughter and through formal training programmes. Men participate by creating the weaving equipment. Songket is used in traditional clothing for ritual and religious ceremonies, festive occasions and formal state functions.

Sri Lankan Dumbara Rata Kalala, or Dumbara mats, are traditional handmade mats used as wall hangings, tapestries or cushion covers. The mats are made in two villages (Kalasirigama and Alokagama) by a community called kinnara that traditionally supplied ornamental mats to the royal palace as part of obligatory service to the crown and ruling elites between the fifteenth and nineteenth centuries. Today, artisans weave the mats for local buyers and tourists. Dumbara mats are made with the fibres of the Hana plant and decorated with symbolic motifs and designs. Dumbara mats are a traditional item of great cultural significance for Sri Lankans, and the means of their creation are transmitted from parents to children through observation and practise.

Carolinian wayfinding and canoe making refers to the centuries-old tradition of building and navigating long-distance canoes. Communities in Micronesia, and particularly in the outer islands of Yap State, continue the traditions of building the ocean-voyaging canoes from local materials, and of navigating, or wayfinding, without maps or instruments. The entire community participates in the construction of the canoe, which begins with the selection and felling of a tree and involves a detailed measurement system based on an indigenous mathematical tradition that is both accurate and verifiable. The carving is done almost exclusively with the indigenous adze. The asymmetrical design supports high-speed sailing and allows access to shallow water. Traditional wayfinders use environmental cues, including atmospheric phenomena, to navigate. Although they have been lost in most Pacific nations, these wayfinding and canoe-making traditions and technologies enabled the settlement of thousands of islands in the Pacific Ocean. The practice is passed on through traditional apprenticeships led by master canoe carvers and navigators.

Tais, the handwoven traditional textile in Timor-Leste, plays an important role in the life of the Timorese people. The textile is used for decoration and to create traditional clothing for men and women. People use Tais to welcome newborns, as well as for traditional ceremonies and festivals. Tais is also a means of expressing cultural identity and social class, as the colours and motifs used vary from one group to the next. Finally, the textile is used as an object of value, such as for dowries or to strengthen ties between families.

With the advent of technology, the tradition of Iranian calligraphy gradually declined. The safeguarding of the Iranian calligraphic tradition thus became a major concern in the 1980s, and a national programme was developed for this purpose by NGOs in collaboration with the government. This programme aimed to expand informal and formal public training in calligraphy, publish books and pamphlets, hold art exhibitions and develop academic curricula while promoting appropriate use of the calligraphic tradition in line with modern life.

Kyrgyz people’s cultural heritage is intrinsically linked to the nomadic lifestyle. However, during the Soviet era, many elements became endangered, including traditional games. Traditional game practitioners and knowledge bearers held their first major meeting in 2007 to discuss current challenges and safeguarding needs for the traditional nomad games. These discussions shaped the Nomad Games: Rediscovering Heritage programme, which focused on documentation and identification of the variety of traditional games in different parts of the country.

In 1995, the Sub-commission on Cultural Communities and Traditional Arts of the National Commission for Culture and the Arts – the lead agency mandated to preserve, promote and develop Philippine culture and the arts – affirmed the need to safeguard traditional knowledge and practices from rapid cultural devaluation. This paved the way for the School of Living Traditions programme, involving informal, community-managed learning centres where practitioners can transmit their community’s knowledge, intangible cultural heritage, skills and values to younger generations.

The ICH Committee annually recognizes projects and programmes aiming at safeguarding intangible cultural heritage implemented in cooperation with UNESCO. They are either the result of the approval by the ICH Committee of financial assistance requests or the implementation of projects designed by UNESCO and financed by its regular budget or by extra-budgetary funds.

The purpose of this three-year project is to assess and enhance the viability of Mongol Biyelgee and to transfer the element from the List of Intangible Cultural Heritage in Need of Urgent Safeguarding to the Representative List of the Intangible Cultural Heritage of Humanity. To be implemented by the Institute of Culture and Arts Study of the Mongolian State University of Arts and Culture, the project involves conducting field research in several provinces to assess and inventory the knowledge, practices and bearers associated with this traditional Mongolian folk dance. Other activities include developing a handout with the results of the field research, providing apprenticeship training in seven regions, conducting an awareness-raising seminar for cultural staff in the country, and creating a documentary film. The project also entails developing additional digital and print content and coordinating a research conference and a Biyelgee folk dance festival. The safeguarding measures were elaborated with the participation of Biyelgee practitioners and local communities, including youth, women, cultural workers, and other related stakeholders. In addition to improving the viability of the element and increasing the number of bearers and trainers, the project is expected to increase the capacities of local actors to safeguard intangible cultural heritage in general.

For the full list of 2021 newly inscribed ICH elements, with detailed descriptions and videos of each of the countries’ elements, visit: https://ich.unesco.org/en/news/find-out-the-newly-inscribed-elements-on-the-2003-convention-lists-13359

For more details on the 2021 project for the safeguarding of intangible cultural heritage from Mongolia, visit: https://ich.unesco.org/en/assistances/sustaining-and-transmitting-mongol-biyelgee-01500

For more information on the 24-country inscription of Falconry to the list of Intangible Cultural Heritage of Humanity, visit: https://ich.unesco.org/en/RL/falconry-a-living-human-heritage-01708

Intangible Cultural Heritage
Together for Peace