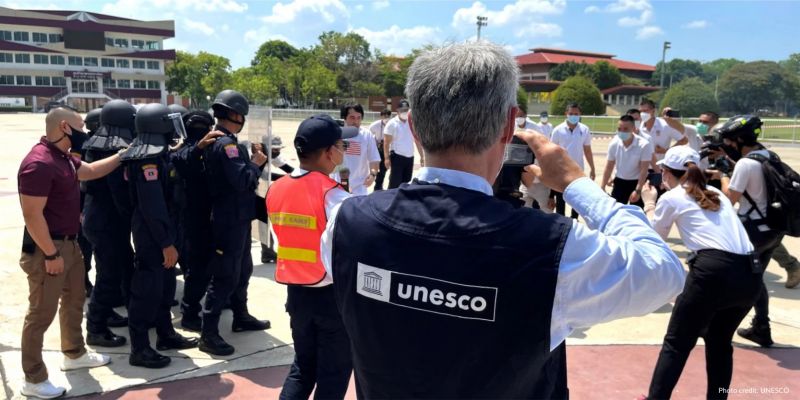 'As a police officer, I need to understand more about how journalists work. Understanding decreases conflicts. If we understand each other, we know what the other wants and we can provide it'.

In order to foster freedom of expression and the safety of journalists working in Thailand, UNESCO and the country’s Royal Police Cadet Academy (RPCA) jointly conducted a training for cadets and anti-riot police in April 2022. The aim of this training, developed by UNESCO, is to enhance police capacities in respecting human rights and freedom of expression, as well as in ensuring the safety of journalists in keeping with international standards.

The four-day training activities brought together 30 police officials and RPCA trainers and comprised both theoretical and practical approaches toward improving participants’ understanding of freedom of expression at a time when political tensions persist in the country. The programme was also an opportunity to create an open dialogue between security forces and journalists, notably through the simulation of protest scenes unfolding between crowd-control units and Thai journalists.

In his opening remarks, UNESCO Bangkok director Shigeru Aoyagi commented, ‘This training is an occasion for fostering increased dialogue between law enforcement officials and journalists. The exchange of experiences of these two sectors of society should enable everyone to better understand how democracy and freedom of expression can be protected through transparent communication, and how they support sustainable development for all’.

The training activity follows Recommendation 51.92, formulated during Thailand’s participation in the Third Universal Periodic Review (UPR) of the Human Rights Council on 21 December 2021 (A/HRC/49/17. The Recommendation was adopted by the Kingdom of Thailand to ‘improve the capacity of police, security forces and other law enforcement agencies to carry out their work while respecting the rights of people to freedom of assembly and expression, and civil society space’. In recent years, thousands of demonstrations have been staged in the country, leading to hundreds of civilian injuries and several deaths. These events have prompted the Human Rights Council to call for an end to the government’s crackdown on peaceful protests, and for the Thai government to guarantee citizens the fundamental right of peaceful assembly and free speech.

'The most interesting part of the training was the discussion where police and journalists came together in a calm environment to have a debate. Normally, we do not have the power balance to be able to talk to each other freely. Mostly, it is the police who have the authority, and we [have to] listen to them, and it is quite hard to respond with what we really think concerning the tense situation on the ground'.

Fostering freedom of expression and the right to information within the Royal Thai Police through UNESCO’s training is part of a broader strategy that seeks to promote transparent and accountable law enforcement institutions with respect to human rights.

'In past situations, we only thought about where a journalist is coming from and whether they are a legitimate member of the press. But now I understand that it is the right of everyone to have freedom of expression. I also understand the international standards on freedom of expression, what we should do in specific scenarios, including how to direct journalists to a safety zone and record the scene without any harm done to them'.

In this context, the involvement of trainers from the RPCA was instrumental in the exchange of best practices based on human rights principles. The application of new law enforcement methodologies can further contribute to fostering freedom of expression and press freedom at an institutional level.

Police Captain Patchara Tata, a RPCA lecturer, is considering how she might incorporate the UNESCO-developed training modules in her own course: ‘I will ask my students to share their experiences, including both the positive points pertaining to professional journalism as well as police duties. Furthermore, we will discuss the characteristics of the media, how they affect the work of the security forces and what we need to prepare for when we are in front of a camera’.

Since 2013, UNESCO and its partners have trained over 8,600 security forces from 20 countries on human rights, freedom of expression and the safety of journalists, following the framework of its 2015 Freedom of Expression and Public Order: training manual, originally developed for the programme in Tunisia, and comprising ‘legal references and tools for delivering training programmes to security forces with a view to promoting transparency, facilitating and improving relations between security forces and the media, and encouraging respect for the safety of journalists in the field’. The manual can be used to conduct joint training programmes involving members of security forces and journalists. It also provides advice for journalists on how to promote their own safety in such circumstances.