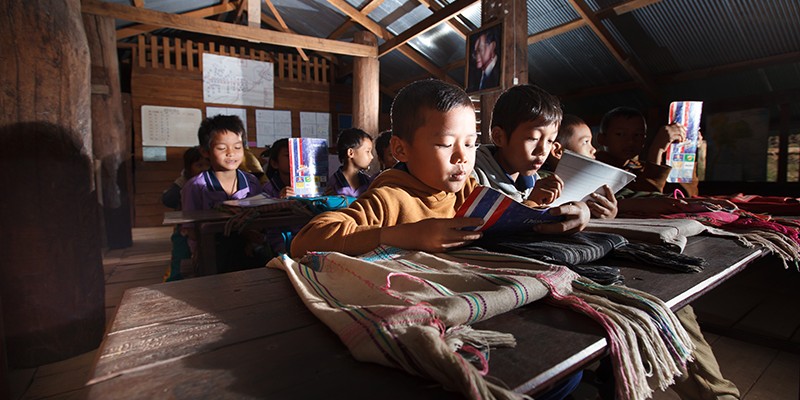 ASEAN’s millions of out-of-school children and youth require more than promises and platitudes; they require key decision-makers and stakeholders to work together in a well-coordinated manner – and to take action. Since 2014, a partnership between UNESCO and Educate A Child (EAC), has been building momentum toward achieving these ends.

UNESCO and EAC, a global programme of the Education Above All Foundation that seeks to provide universal educational access to children, held two consultative meetings in 2016 focusing on advocacy and policy change to help out-of-school children. The result was the ASEAN Declaration on Strengthening Education for Out-of-School Children and Youth (OOSCY), which was drafted with inputs from ASEAN member states and subsequently endorsed by all member countries at the 28th-29th ASEAN Summit in September 2016, in Vientiane, Lao PDR.

This declaration united the entire ASEAN region around a promise to improve educational access and advances have already been made toward achieving these aims. Thailand, for example, has since developed a draft bill to establish an “Equity Education Fund” for disadvantaged children. Korean steel giant POSCO also joined efforts to keep the momentum going in support out-of-school children in Indonesia, Myanmar and Thailand.

The need for concerted action is still pressing across many ASEAN countries. Despite significant progress in widening education’s reach in the region, there are still 3.7 million out-of-school children at the primary level and over 4.1 million out-of-school adolescents at the lower secondary level in Southeast Asia [1].  These numbers are potentially much larger if everyone outside of formal education management information systems and other administrative databases is taken into account.

Many of these challenges overlap, making situations more complex, difficult and politically sensitive.  Thus, despite the global community’s expectations and continuous commitment, the number of out-of-school children and youth has not significantly decreased. In fact, a reverse trend is evident.  Moreover, a significant number of these children and youth in the region are stateless, migrant and undocumented.  These children lack national identification or citizenship and face additional hurdles accessing formal education.

The UNESCO-EAC collaboration continued to provide regional-level support in 2017 to facilitate and broaden collaboration to make real differences in the lives of these marginalized children, with UNICEF supporting workshops under the partnership.

Following the adoption of the declaration, UNESCO Bangkok and EAC assisted ASEAN member states in developing action plans. The declaration’s Working Group (WG) was established and endorsed by the 2017 Senior Official Meeting on Education. Its aim is to serve as a monitoring body for national and regional implementation of the declaration.  To help turn ASEAN's commitment into action and increase educational access to out-of-school children and youth, the organizations supported ASEAN countries in the preparation of three regional collaborative proposals, which are now supported by the governments of Norway and the Republic of Korea.

Expanding access to quality education to all learners is an imperative for the future of ASEAN member states.  Education is a proven investment, advancing economic growth, social cohesion and security.  According to a study by UNESCO Bangkok and Results for Development, The Economic Costs of OOSC in Southeast Asia, countries in Southeast Asia risk losing billions of dollars if millions of children and youth remain out of school. If primary school enrollment remains at current levels, for example, the resulting unskilled workforce could cost Thailand 1.6% of its GDP and Indonesia 2.0%.  Costs are estimated to top US$35 billion for ASEAN as a whole.

ASEAN countries aim to become more “politically cohesive, economically integrated, and socially responsible”,  ensuring human rights for all. To achieve this, no one can be left behind.  Education must be considered a fundamental right for all children.  EAC’s support and involvement continues to help millions of OOSC throughout the region in their efforts to gain access to education.

[1] According to the UNESCO Institute for Statistics (UIS); data accessed in March 2018