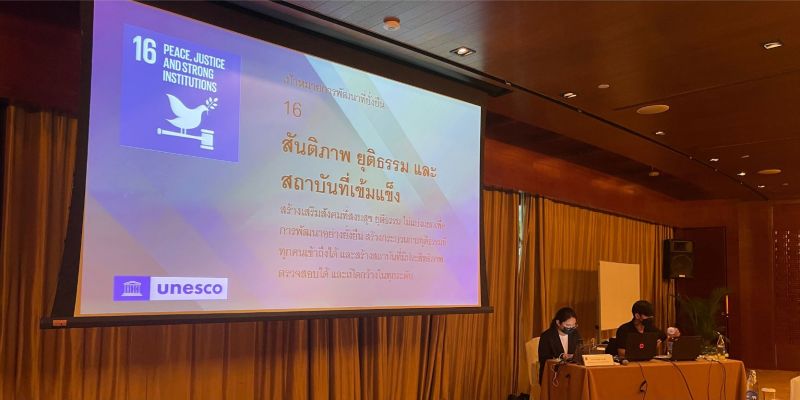 A capacity-building workshop to advance national Access to Information (ATI) monitoring and reporting by Thai Government agencies was organized jointly by UNESCO and SDG Move, on 28 November 2022, at Shangri-La Hotel Bangkok. The workshop resulted in representatives from Thai Government bodies reaching an agreement to adopt the UNESCO Survey on Public Access to Information to report Thailand’s progress towards attaining Sustainable Development Goal (SDG) indicator 16.10.2. by 2030.

As Ms Sasi-on Kam-on, Project Officer for the Communication and Information Unit at UNESCO Bangkok, explained, UNESCO is the only UN agency with a specific mandate to promote ‘the free flow of ideas by word and image’, and ‘to maintain, increase and diffuse knowledge.’ UNESCO is thus well positioned to serve as the custodian agency for SDG indicator 16.10.2., which tracks ‘the number of countries that adopt and implement constitutional, statutory and/or policy guarantees for public access to information.’

Mr Joe Hironaka, Chief of the Communication and Information Unit, noted that ATI is a fundamental human right enshrined in Article 19 of the Universal Declaration of Human Rights (1948), and that within the wider scope of SDG 16, ATI is ‘one of the most objectively measurable indicators for peace, justice, and strong institutions.’ 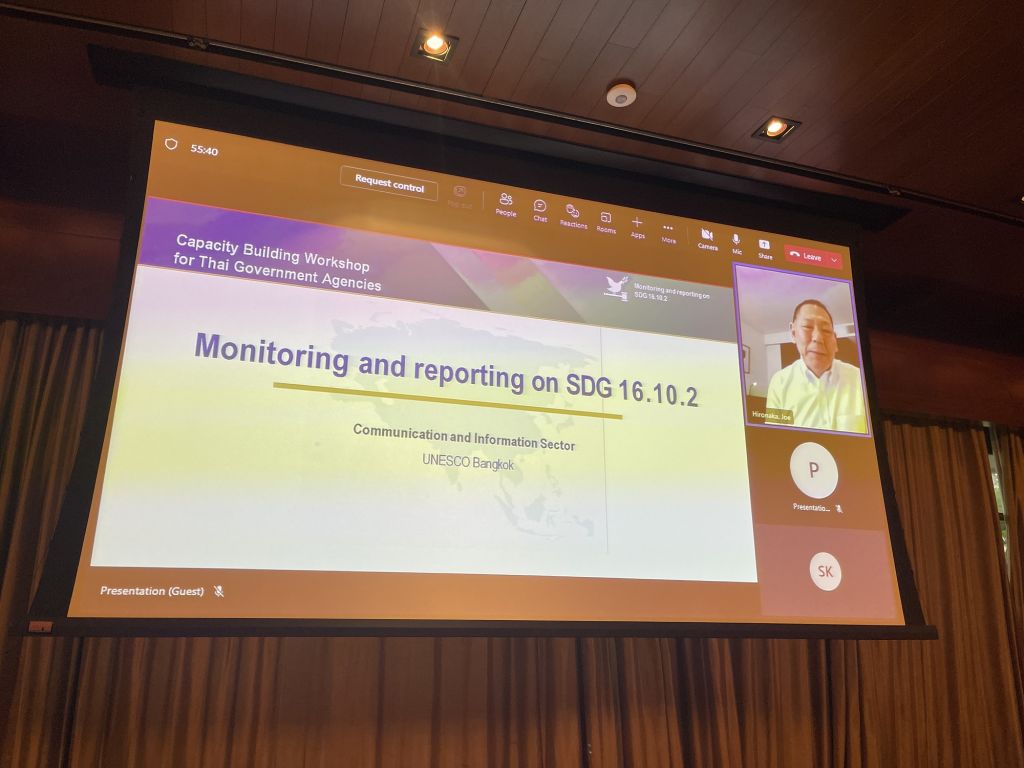 When Thailand adopted the Official Information Act in 1997, it became the first ASEAN country to offer legal guarantees for ATI. Ms Pawana Rurkrai, Director of the Policy and Analysis Division for Thailand’s Official Information Commission (OIC), expressed confidence in the effectiveness of this comprehensive law, recalling the OIC motto, ‘Disclosure is the rule, concealment is the exception.’

An important point to emerge from the workshop was the dual need for working towards the SDGs as a multi-stakeholder effort, while preserving independent oversight. Mr Puntasith Charoenpanichpun, Policy and Plan Analyst at the National Economic and Social Development Council (NESDC), remarked that, in Thailand the state sees itself as facilitator and regulator. On the other hand, however – as Ms Sasi-on responded – the OIC, in particular, should be an independent oversight body in keeping with international norms, rather than find itself subsumed under the Office of the Prime Minister, where its neutrality could be open to question.

UNESCO has established a working relationship with the OIC as recently as 2021, and invited the agency to participate in the annual UNESCO Survey on Public Access to Information in 2021 and 2022. Nevertheless, this participation was not reflected in Thailand’s 2021 Voluntary National Review (VNR), and other relevant government bodies were not, to date, making use of the data submitted to the UNESCO survey.

For instance, even though the OIC is responsible for SDG 16, Target 10, the overarching SDG falls under the purview of the Ministry of Justice, which tracks ATI data using nationally-defined measures, in addition to tools provided by multiple international entities, including the United Nations Development Programme (UNDP) and the World Justice Project (WJP). The Ministry of Justice, in turn, sends the data on SDG 16 to the Ministry of Foreign Affairs to be reported in Thailand’s VNR. 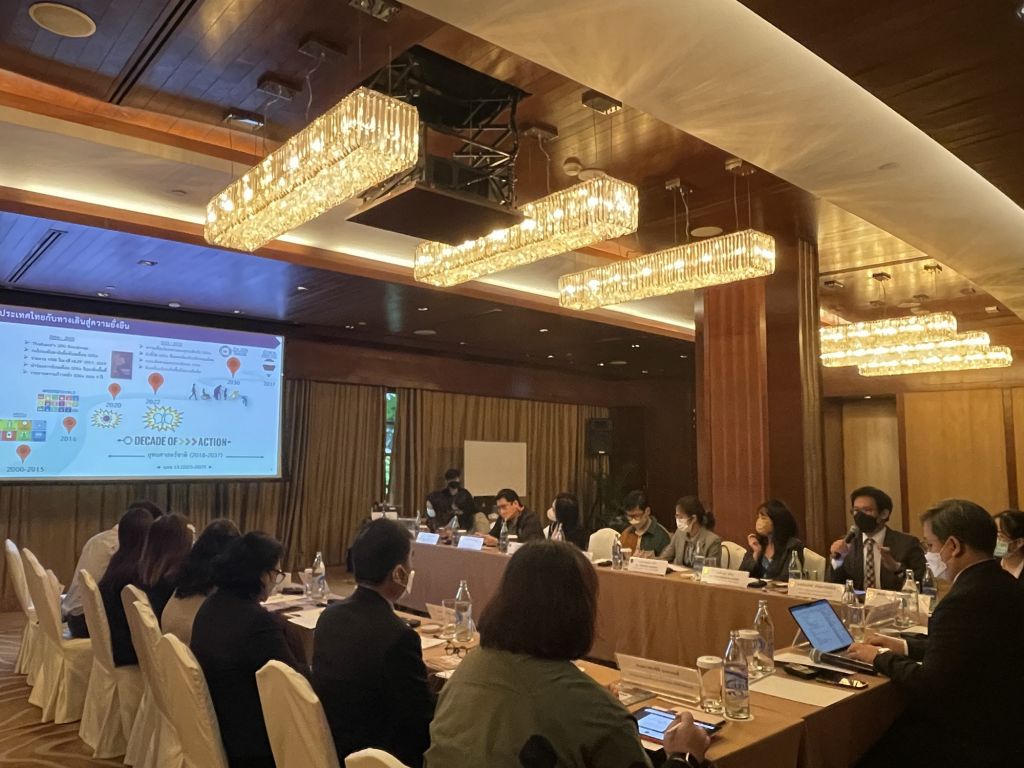 By its outcome, the workshop accomplished two key objectives. First, it offered an opportunity for representatives from different government agencies to hold a meaningful discussion about a more streamlined and efficient information flow. Ms Hataichanok Chinauparwat, Director of the Statistical Forecasting Division at the National Statistical Office (NSO),​ noted that the NSO was working on implementing Statistical Data and Metadata eXchange (SDMX), which aims to facilitate data exchange among international organizations and their member countries.

Second, having recognized UNESCO’s role as the custodian agency for SDG indicator 16.10.2, all parties present agreed that the UNESCO Survey on Public Access to Information should be adopted as a standardized tool of global relevance. It was also agreed that a mechanism should be established whereby the Thai Government agencies involved could collaborate on providing response to the UNESCO Survey. In this regard, UNESCO’s offer to conduct a capacity-building workshop on the standardized tool in the near future was positively embraced by participating Thai Government agencies.

Chairat Chongvattanakij is currently a volunteer for the Public Information and Outreach (PIO) team at the UNESCO Bangkok Office, where he supports UNESCO reporting, translation, media development, and related projects throughout Asia and the Pacific. In addition to his work as a professional translator, Chairat is an accomplished pianist and educator who holds a Doctor of Musical Arts degree from the University of Toronto (Canada), where he taught music theory and piano literature at the Faculty of Music. He has presented research papers at international academic conferences and delivered guest lectures and masterclasses at Mahidol University and Yamaha Music Academy, Bangkok.