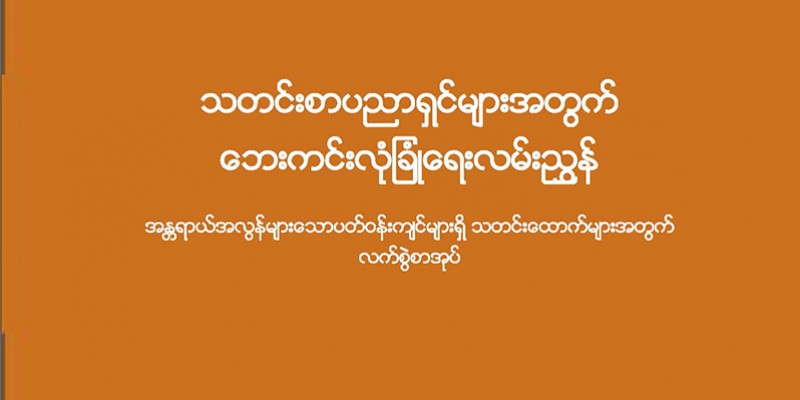 UNESCO has translated into Myanmar language the “Safety Guide for Journalists: a handbook for reporters in high-risk environments” and distributed copies to local journalists associations and organizations, media training institutions, the Myanmar News Media Council and ethnic media organizations.

The Safety Guide for Journalists issued by Reporters Without Borders is aimed at providing guidelines and practical advice for all those who risk running into an enemy of press freedom in conflict affected or high risk areas. Such a situation can quickly test the difference between a happy-go-lucky journalist who set off unprepared and a reporter who packed the right survival kit of experience and equipment.

In partnership with UNESCO, Reporters Without Borders is bringing out a new edition of the Guide for reporters in high-risk environments. The first version, was produced in 1992, has been translated into several languages and updated several times since. More than 20 years on, the threats facing journalists in 2016 have changed. New dangers have appeared while others are being better tackled. To cope with these changes, several new chapters have been added to the Guide. It now covers the issue of digital safety, a growing worry for journalists, safety precautions for those covering natural disasters or epidemics, and also the problem of sexual violence, aimed particularly at female journalists.

The Guide is an important body of knowledge and experience acquired over the years by journalists, news organizations and groups that campaign for freedom of expression. By gathering and encapsulating these good practices from many different sources, the Guide embodies the desire of all partners to join forces and work more closely together to strengthen every aspect of the safety of journalists and the fight against impunity.

The guide has been translated into Myanmar language and printed with the support of the Kingdom of Sweden and the European Union.

You can download the Safety Guide for Journalists in Myanmar language here.