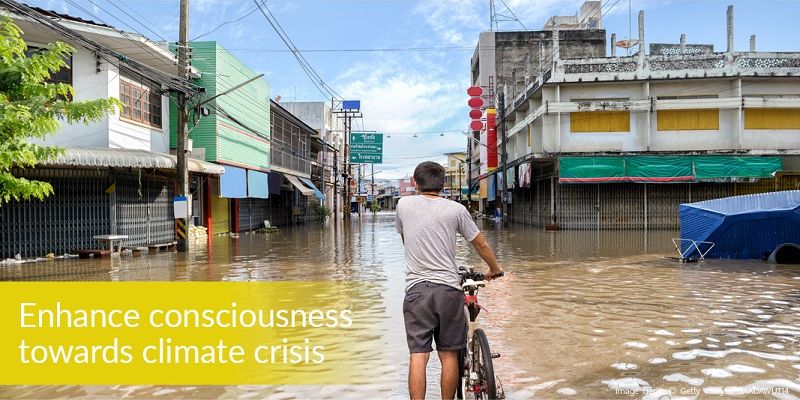 When did you realize the scale of the threats associated with climate change? Was it when you noticed extreme weather events seem to visit too frequently in recent years, or when Leonardo DiCaprio made his appeal – “we need to work collectively together and stop procrastinating” – at the Oscars? When a recent news report claimed Bangkok and other major cities in Asia could be submerged by 2050?

While the public has not reached a consensus on climate change, scientists and experts have agreed that the crisis is one of the biggest challenges of this century. Recent studies and reports have indicated that we are in a race against time and the cost of inaction is too high for humanity. The climate crisis not only threatens our ecosystems, it also affects food and water security, political and economic stability, as well as to our livelihood and landscapes. It undermines fundamental rights, widening inequalities and creating new injustices.

The United Nations started to address climate change as a global issue of great concern 40 years ago and in 1992 nearly 200 governments adopted The UN Framework Convention on Climate Change (UNFCC). Under the Convention, signatories agreed to protect the climate system based on the principle of “common but differentiated responsibilities and respective capabilities”, acknowledging the different capacities and differing responsibilities of individual countries in addressing climate change. The signatories of the UNFCCC now come together annually to review progress and negotiate new climate action during the Conference of Parties (COP).

At the COP21 meeting in December 2015, the Paris Agreement set the ambitious goal to keep a global temperature rise this century below 2 degrees Celsius above pre-industrial levels, and to pursue efforts to limit temperature increases even further to 1.5 degrees Celsius. This agreement saw unprecedented cooperation for 178 nations to combat climate change and adapt to its effects, with enhanced support to assist developing countries to strengthen their abilities.

However, in 2019 we face new warnings that climate emergency is more serious than we previously thought. According to the latest report of the International Panel on Climate Change (IPCC), the leading international scientific entity dedicated to assessing climate change, global warming seems to be accelerating faster than any predictions made so far. Weather extremes have reached new heights, and for the first time since 2015, countries must update their national climate plans under the Paris Agreement, which indicated global warming exceeding 3 degrees Celsius. The COP 25 meeting now in Madrid is seeking to complete unfinished work on the Paris Agreement implementation guidelines, and create the conditions for success in 2020 and a sustainable future for all.

Yet unfairly, most developing countries, which have contributed less to anthropogenic climate change, are more at risk from its impacts and less able to adapt. According to the Global Climate Risk Index 2020 developed by Germanwatch, Thailand ranked eighth among the world’s most affected countries by climate change from 1999 to 2018. It is necessary to enhance social consciousness towards this problem. And to ensure that no one is left behind in terms of awareness, understanding and action, the role of the media and journalists becomes more crucial.

Reinforcing the literacy of journalists to report on science, development and democratic governance is a key objective for UNESCO. In order to advocate for more climate change coverage in developing countries, UNESCO produced a guidebook for journalists in Africa, then launched a new publication “Getting the Message Across: Reporting on Climate Change and Sustainable Development in Asia and the Pacific”. With this book, UNESCO urges journalists in the Asia-Pacific region to empower themselves so as to help citizens and their governments to find better local solutions in the face of possible crisis caused by climate change.

To promote the dissemination and best practices in Thailand, UNESCO Bangkok in collaboration with British Embassy Bangkok organized the Communication Workshop on Climate Change Reporting at Bliston Suwan Park View Hotel on December 3, 2019. In expert lectures, question-and-answer sessions and network building, the workshop created opportunities for representatives from relevant media, universities and ministries to learn more about the science of climate change, access scientific data on the subject and explore reporting skills from different angles.

For more details about this event, please visit https://bangkok.unesco.org/index.php/content/climate-change-reporting-workshop-addresses-biggest-threat-planet

To access the workshop material Getting the Message Across: Reporting on Climate Change and Sustainable Development in Asia and the Pacific, please visit https://bangkok.unesco.org/content/getting-message-across-reporting-climate-change-and-sustainable-development-asia-and.