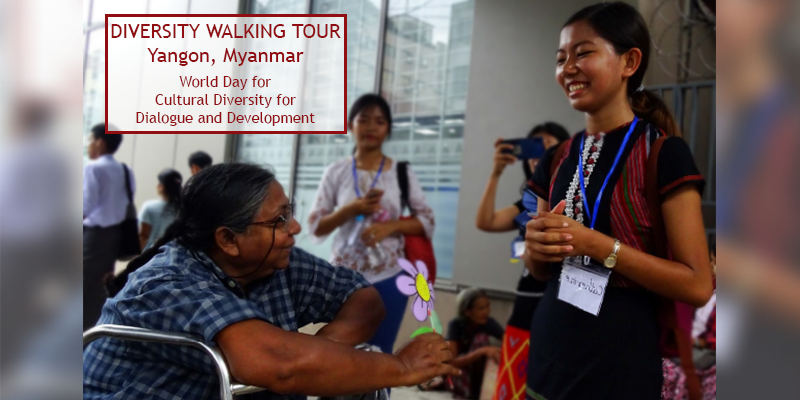 During a recent walking tour in Yangon, 32 young people explored the city’s diverse communities and how people with differing religious and ethnic identities can live in harmony with each other. Over the course of the day, the youth, who represent eight of Myanmar’s ethnic groups, visited quarters of the downtown area where different groups, including Hindus, Buddhists, Muslims, Christians and Jews, live side by side in vibrant communities.

The event marked Myanmar’s first celebration of World Day for Cultural Diversity for Dialogue and Development, highlighting themes that are vital to Myanmar’s future in many ways. Peaceful co-existence among different ethnic and religious communities is, of course, a top priority in a country that has been wracked by internal strife for decades. How can Myanmar build on World Day for Cultural Diversity and Dialogue to realize these aspirations and build a more harmonious and just society for all?

Continuing violent conflicts in Kachin, Rakhine and Shan states are fueled by a complex mix of drivers, but certainly ethnic and communal identities and perceived differences contribute to a continued level of volatility. Even outside the conflict zones, prejudice and discrimination too often lead to hate speech and social conflict.

Myanmar’s extraordinary diversity with 135 distinct ethnic groups and manifold language groups presents unique challenges. Yet the walking tour in Yangon, through disparate communities that have for the most part have lived peacefully side by side, also explored models of coexistence and cooperation between communities without compromising each’s identity or values.

Following the tour, which marked Myanmar’s first celebration of World Day for Cultural Diversity for Dialogue and Development, an event at City Hall was attended by members of the Yangon Region Government, diplomatic community, and young people and other representatives of ethnic communities. “Appreciation of cultural diversity should be at the roots of development, not simply in terms of economic growth, but also as a means to better achieve sustainable development goals,” said Min Jeong Kim, Head of UNESCO Myanmar Project Office.

The event also provided an occasion for the young participants, who were selected based on their membership in ethnic cultural and literary associations, to share their voices about cultural diversity based on their experiences. Representing the Bamar, Chin, Kachin, Kayah, Kayin, Mon, Rakhine and Shan ethnic groups, the young people divided themselves into four groups symbolizing Diversity, Harmony, Prosperity and Unity, each comprising eight participants.

“Diversity means coexisting in peace despite differences” was the lesson drawn from the walking tour, espoused by the group of the same name. “Through the historical narrative of the walking tour, we learned that people of different cultures in Myanmar used to learn, share and adopt each other’s culture,” representatives from Harmony said. “This celebration reminds us of the uniqueness and beautiful concept of diversity. It is our responsibility to cherish the similarities and embrace the differences of our culture.”

The paired goals of development and peace also has particular resonance. “Despite our differences, we are all human and everyone is the same at the end of the day,” Prosperity members said. “With respect and understanding of diverse cultures, we will be able to drive towards sustainable development goals and thus achieve peace.”

There was recognition that peaceful co-existence also involves an appreciation of differences. “We do not have to be feared to express ourselves, our ethnicity and our individualism,” Unity representatives said. “Throughout this walking tour, we witnessed signs of diversity everywhere we visited. However, it still remains a duty of every citizen to create an enabling environment for more people to accept the fact that diversity is beautiful.”

“This celebration is a wonderful opportunity for the promotion of cultural diversity in Myanmar,” said U Maung Maung Soe, Minister of Municipal Affairs for the Yangon Region Government. “It is hoped that it will bring unity and a sense of harmony among the diverse cultures in Myanmar.”