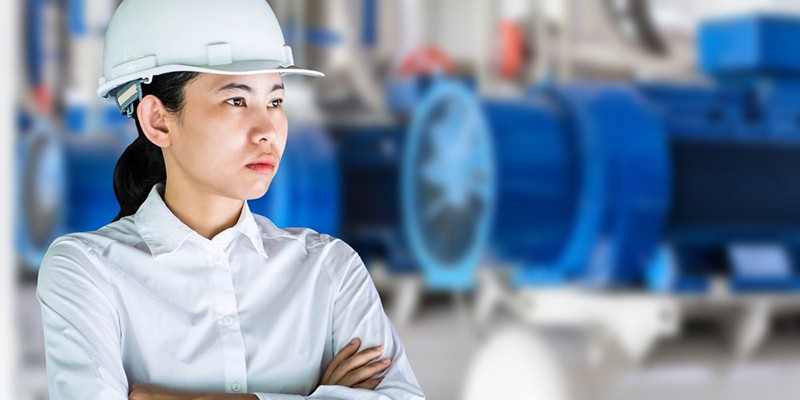 Afra Feyza Toksal was that stellar student that teachers dream about. She consistently ranked first among her peers in primary and secondary school, breezing through standardized exams in her native Turkey to earn a place in one of the country’s most well regarded high schools for science studies.

Nothing in her achievements should have led her to question her own abilities, and yet she did. When she entered higher education, her world changed. “I had lost my self-confidence for STEM [science, technology, engineering and mathematics],” Ms Toksal said. “Luckily, I still enjoyed engineering but I thought that I could not do any hardcore engineering like mechanical or electrical. It was my lack of self-confidence in my undergraduate studies.”

“I was dying to learn programming and keen to become a technical engineer. Though I knew all technical departments were filled with males in the industry as well as academia, I was ready to persist to take a seat,” she said. “However, there was a major problem: I was doubting whether I deserved such a technical position, yet I got all As in my programming classes.”

Ms Toksal’s experience is all too familiar. At UNESCO’s recent International Symposium and Policy Forum, “Cracking the Code: Girls’ and Women’s Education in STEM”, held in Bangkok from August 28 to 30, the trend of female students being progressively deterred from advancing in STEM studies is seen in country after country.

In Turkey, near gender parity in STEM participation at the primary school level is winnowed away to only 20 percent of university-level engineering students being women, while the percentage of practicing female engineers falls into the single digits.

Many factors contribute to this “leaky pipeline”– talented girls and young women dropping out of STEM studies at more advanced levels – starting with pressure from parents and the early learning environment to curricula bias and teachers’ favouring boys.

Girls’ and women’s self-image relative to STEM is at stake, with a study cited in UNESCO’s report, “Cracking the Code”, launched at the symposium, showing that in some contexts the majority of social media messages denigrating their capabilities in science and mathematics are posted by young women themselves. “A woman has to persuade others that she deserves a seat at the STEM table, while at the same time doubting her own capacity,” Ms Toksal said. “This was what happened to me.”

Those pressures are also specific to cultural and educational contexts. In the Turkish context, Ms Toksal said, those pressures hit critical mass as women enter adulthood due to social expectations associated with motherhood, which is seen as mutually exclusive with STEM careers.

Ms Toksal’s reflections shed light on the young women can confront. She focused on the forms of her insecurities at the time – a feeling of being afraid to learn, a sense of self-doubt that she termed the “imposter complex”, feeling the need to retrain on technical points and a generalized lack of self-confidence. Remember, this is a young woman who had tested in the top tier of standardized national exams including some 2 million students.

Microbiologist Dr Anjana Singh identified a different moment of crisis in her educational career in the context of cultural expectations in Nepal. Eighteen days before her first year Master’s exams, she was married in an arranged match to a man that she had never met. “I was crying, but because of my exams, not my marriage,” Dr Singh said.

While she faced resistance from her in-laws as she pursued higher education, she focuses on barriers facing girls in education in her country at much earlier levels – the lack of toilet facilities at schools areas, which persists in rural areas. They must choose between continuing their studies and going to the bathroom with dignity. “We [the forum participants] have had a good opportunity, so no wonder we are here,” Dr Singh said. “We would like to give those same opportunities to these schoolchildren.”

At the conference, Dr Singh invited partners to reach out to her, leveraging her local knowledge and standing to begin to redress a fundamental human rights issue.

Just as Dr Singh has broken new ground in her country, when Dr Kong-Joo Lee, a professor in the College of Pharmacy at Ewha Womans University, began work in her discipline, men overwhelmingly dominated the sciences in the Republic of Korea. “It was a very bad situation at the time, less than 10 percent of researchers being women in government research institutions,” Dr Lee said. “There were not that many woman scientists and engineers in Korea, and we tried to think about why.”

For Dr Lee and female colleagues, the gender imbalance was a call to action. “We began to organize,” Dr Lee said. “I was the first person to call everybody, women in government research institutes … to organize women in these fields, and everybody was so happy and they were really ready to support the group.” It was an initiative that would shape her life’s work – in addition to her research and academic vocation, Dr Lee is now in her second term as president of the International Network of Women Engineers and Scientists (INWES), linking organizations in 11 geographical regions that are promoting women’s achievements in STEM.

‘ONE IS NOT ENOUGH’

These women represent the types of successes that UNESCO hoped to help replicate by drawing together leaders and resources at the Cracking the Code forum. After less-than-perfect exam results after her marriage, Dr Singh rose to the top of her class in the subsequent year and became the first female microbiology graduate at the Master’s level in Nepal. In addition to her academic work, she is also a strong proponent in gender-equal education through Women in Science and Engineering (WISE).

She now works in a position that involves programming, once outside of the scope of what she believed possible. “I am the only female and the youngest member in the tech department of the firm. And I feel much more confident these days.” She has also rediscovered her passion for STEM and its possibilities for development. “You want to help be part of it, it creates a passion and it drives you to work hard for your passion.”

Personal drive and passion were just as integral in Dr Singh’s career, particularly during trying times. “If you have interest, you can excel at this. If there are hurdles, you can overcome them.”

And yet as the “Cracking the Code” report makes clear, girls and women pursuing STEM studies and careers still need support, particularly in the face of systemic gender biases and stereotypes. “We need to have back up,” Dr Singh said. “We need to have collaborations, not only with women, but also with men.” She credits her husband’s support throughout her tertiary education  – even her once-critical mother-in-law was won over after she received her doctorate.

A prominent theme of the UNESCO symposium and report is that while girls’ and women’s STEM education is a fundamental human right involving gender equality, it is not exclusively a “woman’s issue”. Female students need STEM education, but the STEM disciplines also need girls and women. Development goals depend on empowering women to make contributions in these fields, offering a diversity of viewpoints, capabilities and perspectives that has often been lacking.

As women such as Dr Lee and Dr Singh open new inroads into STEM fields, they provide role models that disprove stereotypes fed to girls at every age discounting their potential. Ms Toksal credits INWES and Dr Lee personally for helping her realize her own potential as a leader in girls’ and women’s STEM education.

In turn, she is now playing a leading role in Koc University’s comprehensive programmes aimed at engaging girls and young women in STEM, starting with outreach and labs targeting children as young as seven, through to secondary school activities such as coding workshops and career counseling for college graduates. She has found that many of her peers shared her earlier challenges. “My volunteering work for girls in STEM energizes and encourages me.”

The importance of such strong female role models, of teachers that foster girls’ and women’s interest in STEM subjects, and of peers that encourage instead of discount female students’ capabilities cannot be overstated. The gender gap in STEM disciplines will only be bridged by joining hands.

In her role at INWES, Dr Lee is leading these efforts to coordinate cooperation between like-minded individuals in the field. “I try to emphasize solidarity to overcome the gender problems we face in each organization of each country,” she said. INWES brings together regional networks, the Asia-Pacific Nation Network, the Africa Regional Network and INWES Europe, to address regional challenges.

She has some sage advice for promoting gender equality: “I think that the number is very important. Always I tell faculty departments, do not have only one woman in the faculty, at least two or three are needed to have the power to change the environment. One is not enough.”