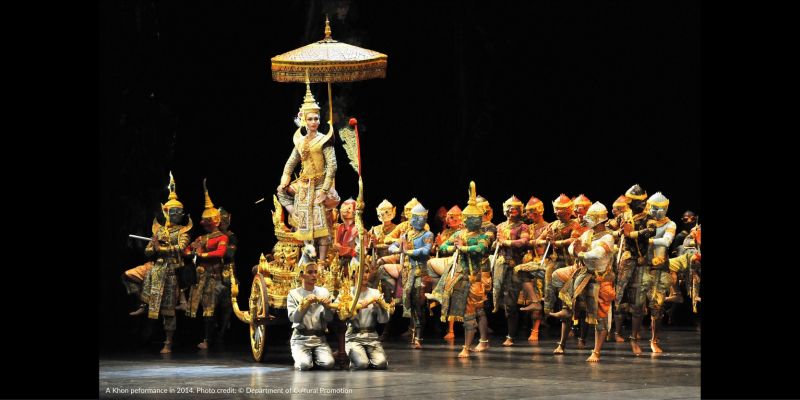 As of 2022, it has been four years since ‘Khon, Masked Dance Drama in Thailand’, was inscribed on UNESCO’s Representative List of the Intangible Cultural Heritage of Humanity in 2018. While attempts have been made to implement a safeguarding plan for this cultural heritage since then, the COVID-19 pandemic has made this difficult, especially because this cultural heritage element is a show that requires a large number of actors and backstage crew for each performance. Another difficulty is related to the fact that every performance is interactive, with actors as message senders and audiences as message receivers, both of whom must be in the same place at the same time. Nevertheless, in the midst of the COVID-19 crisis and changes in people's way of life, some opportunities were found to apply the knowledge gained from training workshops with UNESCO and implement ways of safeguarding and managing cultural heritage elements during the pandemic.

Khon has a history that dates back hundreds of years. It started in the royal court and later spread into wider Thai society. Today, Khon performing arts are still being taught and transmitted across the country. Thus, there continues to be practice and transmission. Aside from the music and the singing arts, which can be seen on stage during a performance, Khon also involves a mix of various other Thai arts and crafts, including painting, sculpture, jewelry, embroidery and carpentry, all of which require expertise and specialized skills. This knowledge and the various skills also need to be safeguarded, along with the Khon performing arts and music.

During the period that physical performances were merely impossible, the Department of Cultural Promotion of the Ministry of Culture organized an online Khon performance. This was done in order to comply with various health measures designed to control the epidemic in Thailand. While it was not ideal, and the aesthetics of the performance were inferior to live performances, it helped to keep Khon alive and created visibility for Khon to a certain extent.

The pandemic provided an opportunity to focus more on the process of safeguarding various craft skills, In the past two years, this has been carried out in various ways, including through surveys and inventorying, as trained by UNESCO, in two branches: Khon mask and headdress (siraporn) making and costume-making, two important elements of the Khon stage performance. 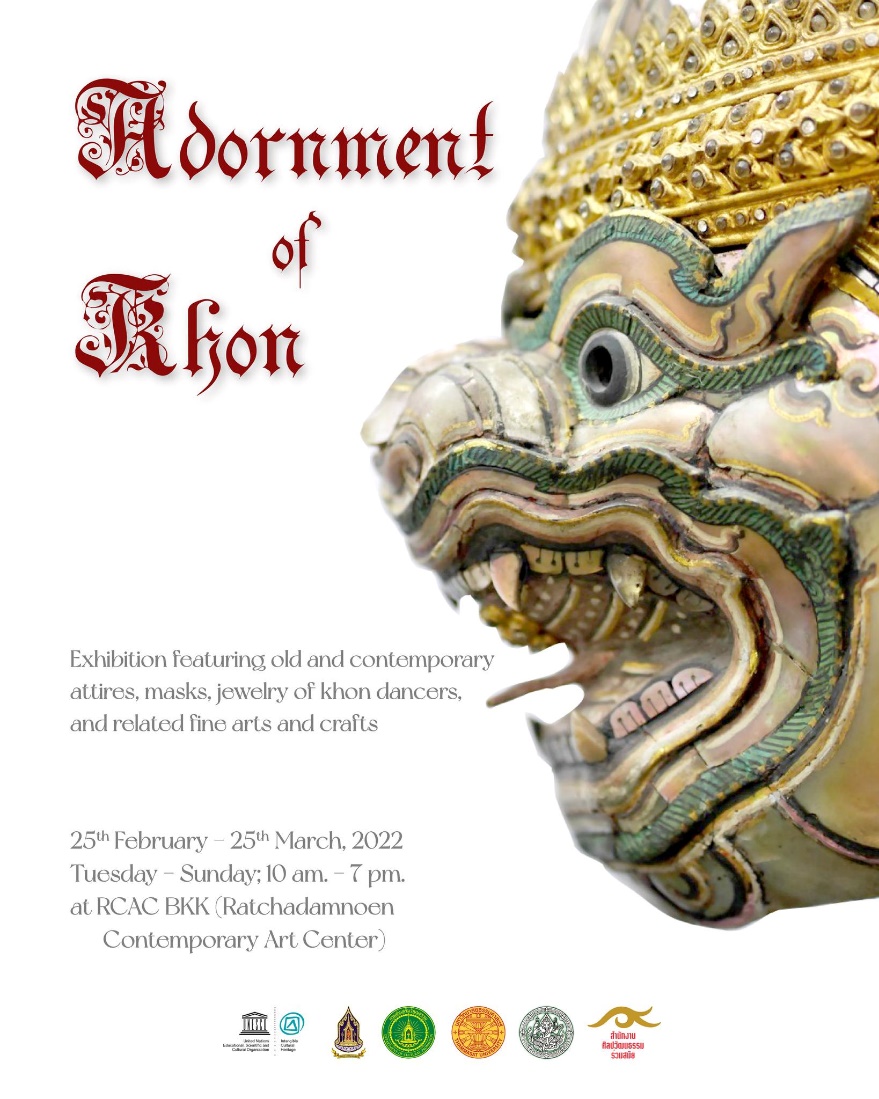 ‘Adornment of Khon’ exhibition was held during the COVID-19 pandemic in 2022.
©Department of Cultural Promotion

The masks used in the Khon are known as the ‘Hua Khon’. These masks cover the entire head. Different masks are used in the Khon to represent the various characters in the ‘Ramakien’ story (‘Ramayana’). The differences in the eyes, noses, mouths, costumes and colours tell the audience which characters the actors are portraying. 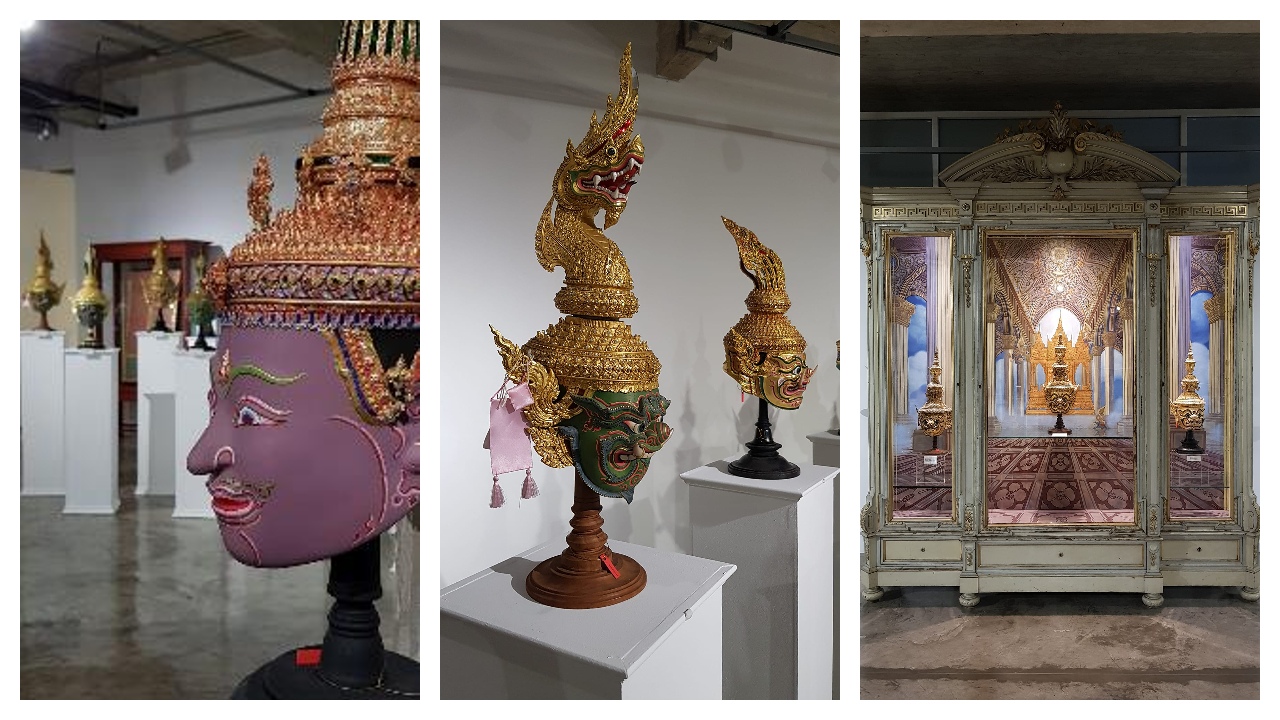 Simon de la Loubère, an envoy of King Louis XIV from France, who visited the Siamese court in the late seventeenth century, described the masks worn in Thai Khon performances as being ‘hideous’. He was probably referring to the masks of demons and monkeys that the actors wear in a battle scene.

The mask moulds are made using the papier-mâché technique of layering paper, the main material. The details are sculpted with a mixture of sawdust, glue and soft chalk. Patterns are added using natural resin (ruk), which is pressed onto the mould in small pieces. Then it is gilded with gold leaf and coloured, and a pattern drawn. Glassware and gems are inlaid to create a shiny effect when light reflects from the masks during a show.

The quality of the materials used in mask-making has changed over the years along with changes in the availability of the raw materials, and the details have been improved to become more and more beautiful. Although masks are still produced in accordance with tradition, the details of the patterns and the materials that are used have changed in order to increase the speed of production, reduce the time needed for material preparation and to produce a level of quality consistent with expectations in the current era. In addition, artisans who have been trained in educational institutions, both in higher education and vocational schools, now take measures to protect the health of the Khon mask wearers by avoiding toxic materials, particularly harmful chemicals that were used in the past to create the masks and colours.

Using social media as a tool, researchers created an inventory of mask-making artisans, including where they were located. The researchers found that there are mask artisans all over the country. Furthermore, the researchers found that the inscription of Khon on the Representative List of the Intangible Cultural Heritage of Humanity has raised awareness of this cultural heritage and increased admiration for it, including the mask-making artisanship. As a result, there is a growing demand for such masks, both for wearing in Khon performances and for collecting. There has also been an increase in interest in learning the art of mask-making, and an increase in studies and research on using renewable materials that are environmentally friendly and safe to make the masks. At the same time, new masks are being designed in a traditional manner for characters in the Ramayana that do not appear in the Khon performance or for whom there was no definite mask pattern. This new creation indicates that Khon performances in Thailand are still living heritage. This innovation offers an opportunity to strengthen cultural traditions to the extent acceptable by the holders of this cultural heritage. 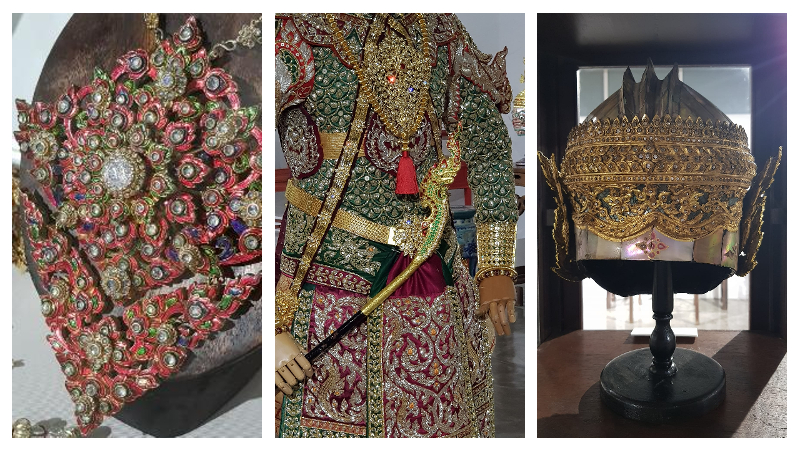 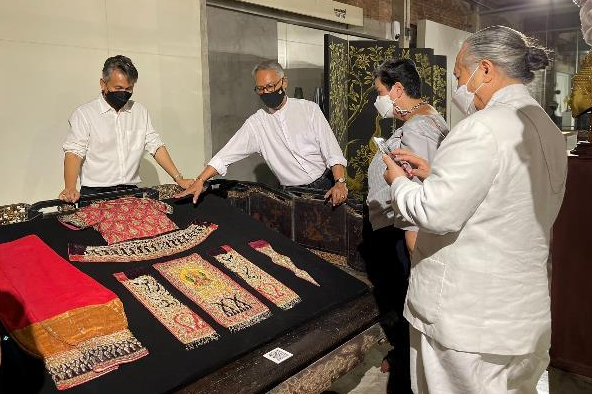 Another traditional form of art and craft related to Khon performances is the embroidery of the costumes. This embroidery is an important element of the stage performance because the costumes make the roles of the characters in the Ramayana appear more realistic. The patterns of embroidery of the various costumes correspond to the masks the actors wear, and indicate who each character is and each character’s status in the story.

The patterns are created by embroidering on a silk or satin fabric with materials such as silver and gold wire, gold thread, coloured thread, silver and gold sequins, and betel wing sequins. Such embroidery is a highly meticulous work of art that requires people with specific skills and abilities to execute, from the design stage, through creating a pattern with embroidery, and then tailoring the different parts of the costume to the body of the actor. In general, the female characters’ costumes have four parts. The costumes of the male-lead and demons may have between 11 and 16 parts and must be tied and sewed onto the body of the performer before each performance.

Embroidery skills are generally passed down within a family of artisans. Embroidery patterns and styles often follow inherited traditions, which differ according to the type of artisanship. The budget allocated for costumes determines the quality of the work. 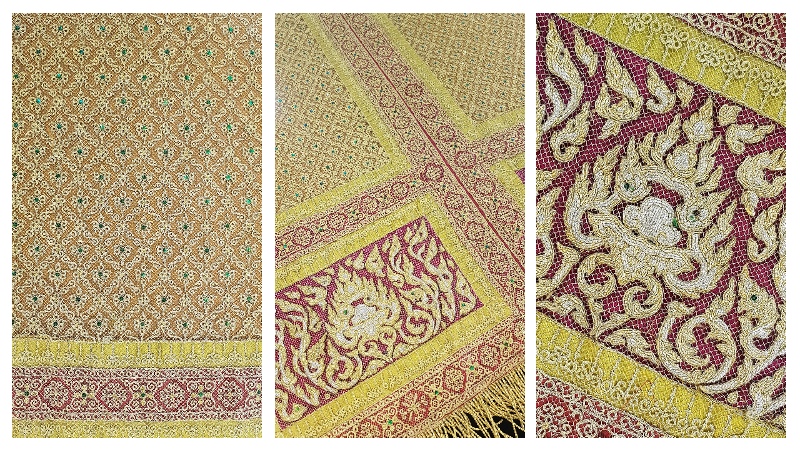 The fieldwork at the costume production site began by informing the knowledge holders of the importance of the inventory and requesting permission to record information about the practitioners, the production process and the patterns used by each artisan group or each family.

According to the results of the survey and the inventory that was compiled of these practitioners, there are currently embroidery and costume artisans in many areas of Thailand, but particularly in the central region, in Bangkok and its neighbouring provinces. The study also found that a new generation of youth is interested in learning how to make costumes and produce them as a side career, in addition to their full-time jobs. Also, a group of younger generation people have turned to conservation work. They study the motifs and methods of making costumes from old photographs and surviving costume fragments that are on display in private collections and in the National Museum. They try to produce costumes based on the methods that were used last century. This is a revival of embroidery artisanship that had been lost for some time.

The increase in public awareness of Khon, and the work to safeguard Khon has resulted in increased interest among parents, many of whom want their children to practice Khon. When the COVID-19 pandemic began to ease, there was a surge in demand for Khon costumes, and particularly costumes for children in primary and secondary school. As a result, artisans have scaled-down costumes and masks and made versions that are appropriate for children to wear. Many artisans are also creating costumes at a lower price in order to accommodate the expanding market.

Another factor that can contribute to the safeguarding of Khon is the dissemination of information about Khon online, and exhibitions for the general public of Khon masks, costumes and other arts and craft related to Khon. Such activities give people an opportunity to recognize the importance of artisan skills and the transmission of these skills, while also admiring these exquisite creations.

This is an adapted version of an article translated from Thai into English and published in the report, ‘Capacity-building programme on safeguarding intangible cultural heritage in Thailand: outcomes of CRIHAP-UNESCO Bangkok collaboration’, UNESCO, 2022.

For more information about the important work of the International Training Centre for Intangible Cultural Heritage in the Asia-Pacific Region (CRIHAP), visit: http://en.crihap.cn/