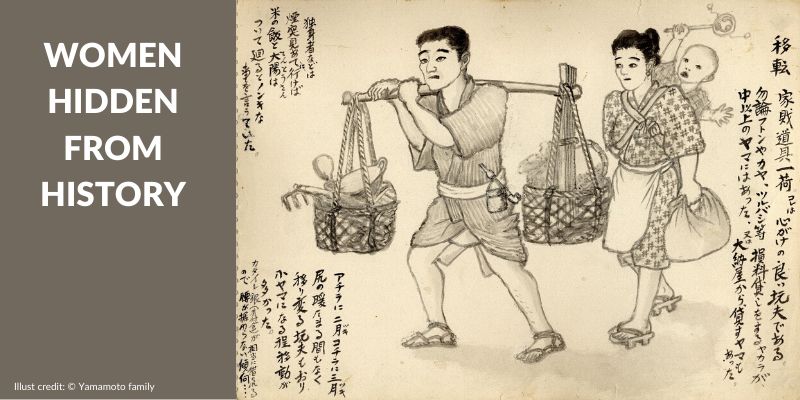 At the age of 66, Japanese coal miner Sakubei Yamamoto started to paint the life of a northern Kyushu mine starting in the Meiji era. He produced more than 500 artworks, some of the most valuable ethnological source material from Japan, with the intention of “telling future generations about true life and human feelings”. His work reflects the living situation of women at that time, but also shows that they were less productive and educated than men, burdened with family, and even lacking basic sanitary conditions at work.

This is a familiar story. Across the world, women have consistently been subjected to discriminatory and often harmful conditions in the workplace and society. Men’s dominant roles in traditional activities has lasted for thousands of years, leading to the denial and neglect of women’s status and rights. Persisting to the present day, women have not been able to participate equally in social, political and economic life, while at the same time their achievements have often been deleted from received histories.

In order to prevent the irrevocable loss of collective memory, UNESCO launched the Memory of the World Programme in 1992 to facilitate universal access and public preservation of precious documents in many media that reflect the cultures, traditions and values of their nations. Among the 426 inscriptions of documentary heritage in the international register, only five relate directly to women and women’s empowerment – and only one in the Asia-Pacific region. Yamamoto’s art is just one example of documentary heritage that documents crucial realities of women’s lives from history, yet which is not directly linked to them in the inscription.

“Women’s presence has been submerged in a generic consideration of the significance of documentary heritage under the criterion of ‘People’,” said Roslyn Russell, former chairperson of the International Advisory Committee of the Memory of the World Programme. “Unless nominators have specifically identified women’s presence in the documents, this has gone unremarked in general descriptions.”

Recognizing that historical deficit, we need to re-examine national documentary heritage from the perspective of gender equality. On International Women’s Day 2020 this past Sunday, UNESCO Bangkok launched the publication “Gender Equality Baseline Study of Memory of the World in Asia-Pacific”, reviewing 155 inscriptions from the Asia-Pacific region through a gender lens. The tool also enables readers to assess gender sensitivity of inscribed heritage and identify more historical documents linked to women in cultural, social or political arenas.

These narratives matter. Even in 2020, when the world has made substantial progress towards more just and equal societies, this worldwide gender imbalance is still changing very slowly. As just one example, thousands of women in Japan are protesting against being forced to wear high heels in workplaces, fighting for the right about how to represent themselves in society.

Related discrimination is readily apparent throughout the workplace. Globally, women hold only about one in four seats in national parliaments, and out of 500 chief executives leading the highest-grossing firms, fewer than 7 per cent are women. The Nobel Prize has been awarded to more than 900 people in the course of its history from 1901 to 2019, but to only 53 women. In the sciences, journalism, entertainment, sport and culinary arts – with few exceptions, professional women are still suffering from stereotyped roles and significant underrepresentation.

While gender discrimination is common throughout, the form and representations in the historical record differ by culture and context. In Thailand, the Ram Khamhaeng Inscription is widely regarded as the single most important document in the nation’s history, recounting in one section “a host of sons of his city and realm to be in accord with righteousness”. In the few references to women, however, they are typically presented simply as “dedicated damsels”.

The representation bias extends to the documentary record up to the current day, although the picture is changing. “In Thailand's film industry decades ago, the number of female directors was relatively small, most of them were only responsible for production, costume and make-up,” said Sanchai Chotirosseranee, secretary-general of the Southeast Asia-Pacific Audiovisual Archive Association. “But luckily now more and more Thai female directors appear, and they are representing the creative shooting themes and perspectives.”

The theme of the International Women’s Day this year was “I am Generation Equality: Realizing Women’s Rights”. Amid the many challenges the world faces today, from establishing peace and sustainable development to mitigating the climate crisis and environmental degradation, women’s roles are critical if humanity is not to fall further behind on these goals.

This year also marks the 25th anniversary of the Beijing Declaration and Platform for Action adopted at the Fourth World Conference on Women, “determined to advance the goals of equality, development and peace for all women everywhere in the interest of all humanity … acknowledging the voices of all women everywhere and taking note of the diversity of women and their roles and circumstances.”

These are not just statements made by UN agencies and policy-makers – they are urgent calls to action, particularly to younger generations, calling for gender equality based on new ideas, technologies and media. The outcome will affect us all.

“Modern technology and digital media now make it possible to reach a worldwide audience and to raise awareness of women's achievements,” said Ms Russell. “Facebook and other social media platforms have brought stories of previously unheralded women, and information about social conditions that affect women, to light in ways that could not have been imagined decades ago.”

Across the region, international organizations, the government, private sector and NGOs are jointly making efforts to promote the women’s visibility in society. The Asia-Pacific Nation’s Network of Women Engineers and Scientists has held an annual conferences since 2011; in Thailand, the Wiki4Women initiative is 2018 organized an edit-a-thon to document women’s lives and achievements on Wikipedia in an initiative meant to replicated in countries across the region.

More women need to be visible in historical narratives, but equally more girls and women need to be empowered with the technical skills to write their own narratives in the digital age. This not just about women’s history, but the history of us all.

By Zhang Ruohan, a communications specialist at UNESCO Bangkok.

* This article was first published in The Japan Times.