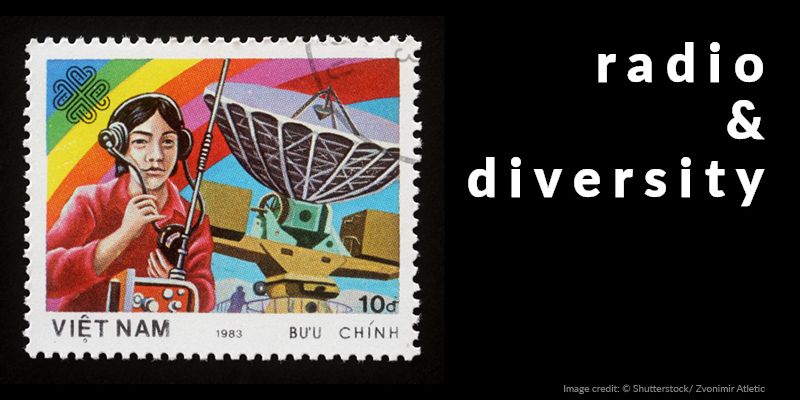 Complementing its wider engagement with the public, radio can empower young people, women and ethnic minorities to join the discussion around the future of the medium itself, the use of new technologies, and the opportunities and challenges faced by the next generation of journalists and listeners.

In recognition of that potential, UNESCO Hanoi celebrated World Radio Day 2020 on 13 February with a live radio programme broadcast by the Voice of Vietnam (VOV). The 9th edition of the International Day was held under the theme “Radio and Diversity”, with the radio programme including a discussion with speakers and experts, the involvement of journalism students, music shows, and the participation of the audience showcasing radio’s vitality, dynamism and evolution.

“The theme Radio and Diversity describes the situation of radio in the era of new information,” said Tran Minh Hung, VOV Vice President. “It’s not just a diversity of topics, audience and programme formats. It’s also a diversity of information sources and means of transmission. Radio broadcasting today implies not only radio receivers, but a great diversity of media and means of transmissions. The Voice of Vietnam, Viet Nam’s primary house with four types of media, broadcasting in 13 ethnic languages and 12 foreign languages, is a model of radio diversity.”

This year, World Radio Day’s theme was an opportunity to reflect on what diversity means, to raise awareness for the public, to encourage decision-makers to establish and provide access to information through radio, and to enhance networking and international cooperation among broadcasters in Vietnam. The focus was on three key areas: advocate for pluralism in radio, including a mix of public, private and community broadcasters; encourage representation in the newsroom, with teams comprised of diverse groups from across society; and promote diverse editorial content and programme types reflecting the variety of audiences.

“Even with the Information Revolution, radio remains a medium with a purpose, informing audiences through information, entertainment and audience participation,” said Michael Croft, UNESCO Representative to Viet Nam. “It maintains its global reach, now amplified by the power of internet. Despite the wonders of television, the computer and the internet, it is still loved, because at its heart it is an inclusive and very human medium, something which cultivates our diversity even as it links us together.”

The importance of diversity in radio broadcasting in Viet Nam and in the world, the development of new global radio technology trends, and the need to adapt content and formats to audiences were the central aspects during the live radio conversation. “Internet provides a real opportunity for radio as it helps to increase diversity,” said Misako Ito, Regional Adviser for Communication and Information at UNESCO Bangkok. “Podcasts in particular provide a new way to engage specialized interest groups and audiences as they provide longer programmes oriented around topics and interviews not usually served by traditional channels. And they can charge two to three times more the advertisement rate than the traditional programmes.”

In Viet Nam, as in many other countries, radio is a global and unifying media, especially in poor, marginalized and rural areas and other hard-to-reach communities, where it remains one of the few available, affordable and trustworthy sources of entertainment and reliable information. In some isolated places, it is the only source of information. Radio offers everyone, regardless of educational level and socio-economic situation, the opportunity to imagine, be entertained and participate in public debate.

The celebration of World Radio Day 2020 took place at the headquarters of VOV, established in 1945, with the participation of Mr Tran, Mr Croft, Ms Ito and other radio experts and guests.

Radio not only informs, but also shapes our lives, giving an opportunity for all voices to speak out and be heard. Proclaimed in 2011 by the Member States of UNESCO, and adopted by the United Nations General Assembly in 2012 as an International Day, 13 February became World Radio Day (WRD).