Putting the Periphery at the Center of the Conversation: Re-examining the Thai Media Landscape | UNESCO Bangkok Skip to main content 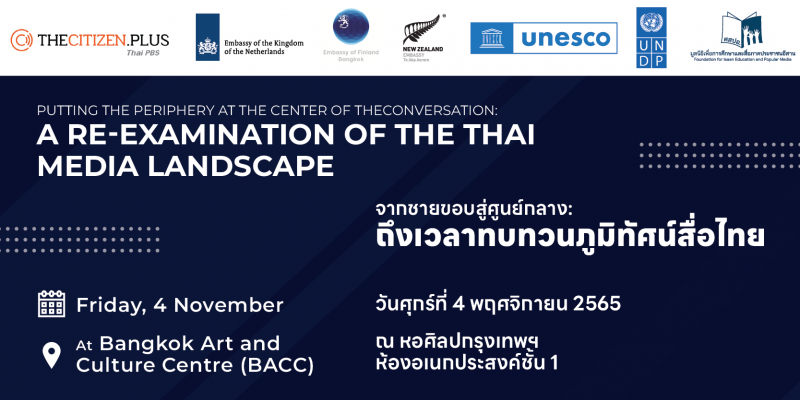 Media freedoms and freedom of expression in Thailand are under increasing pressure through legal frameworks and in daily practice. Multiple challenges to a flourishing media are compounding an already shrinking civic space for the free and safe exchange of ideas and debate, allowing social cohesion challenges often at the local level to go unheard or fester, or encouraging misinformation.

Thailand has a vibrant media sector. Nonetheless, studies show how most media, especially mainstream media, have a tendency towards event-oriented reporting and over-rely on sources from the state, social or political elites. Well-rounded, triangulated, and in-depth reporting using primary sources which seeks to explain the complexity of events and motivations by including a range of perspectives, receives minimal news space. As a result, many vulnerable and marginalized parties are left behind, while simplified stereotypes are encouraged.

A lack of security is a further challenge, particularly for women. Violence against journalists is often not investigated. Physical and verbal harassment of female reporters, including via online platforms, are noted as a risk to press freedom. Journalists in the Southern Border Provinces or those undertaking investigative journalism on state power and interest groups, such as resource disputes, often face harassment, lawsuits, and arbitrary detention. Independent and online journalists – not formally recognized by authorities or protected by organizations – are particularly vulnerable.

Against a background of highly Bangkok-centric news, a new generation from the margins are asking legitimate questions about economic and social inequalities, freedom of expression, community conflicts, uneven applications of justice. Many youths turn to online journalism to tell stories of their region, including many young women, who now have a revitalized appetite in journalism, embracing regionalism and greater civic engagement.

This event launches an 18-month programme – supported by the Embassies of the Netherlands, Finland, and New Zealand, as well as UNDP and UNESCO – aimed at developing and nurturing a Thailand-wide grassroots network of some 50 young, predominantly female citizen reporters to sustainably produce positive authentic investigative content in safety. The aim is to help shine a people-centered and gender sensitive light on local social cohesion challenges, economic and social inequalities, issues around justice, and community-level conflicts.

Citizen+ and The Foundation for Isaan Education and Popular Media (FIEPM) are delighted to invite media professionals to discuss the challenges facing the media sector in Thailand today, and to engage with these up-and-coming young citizen journalists, mostly young women, from around the country. The event will present and discuss research on the Thai Media Landscape: Challenges and Opportunities, including a focus on smaller independent operators. Experts will discuss the future of Thai media, the importance of Journalism that Builds Bridges, and why the Regions need to be better heard. 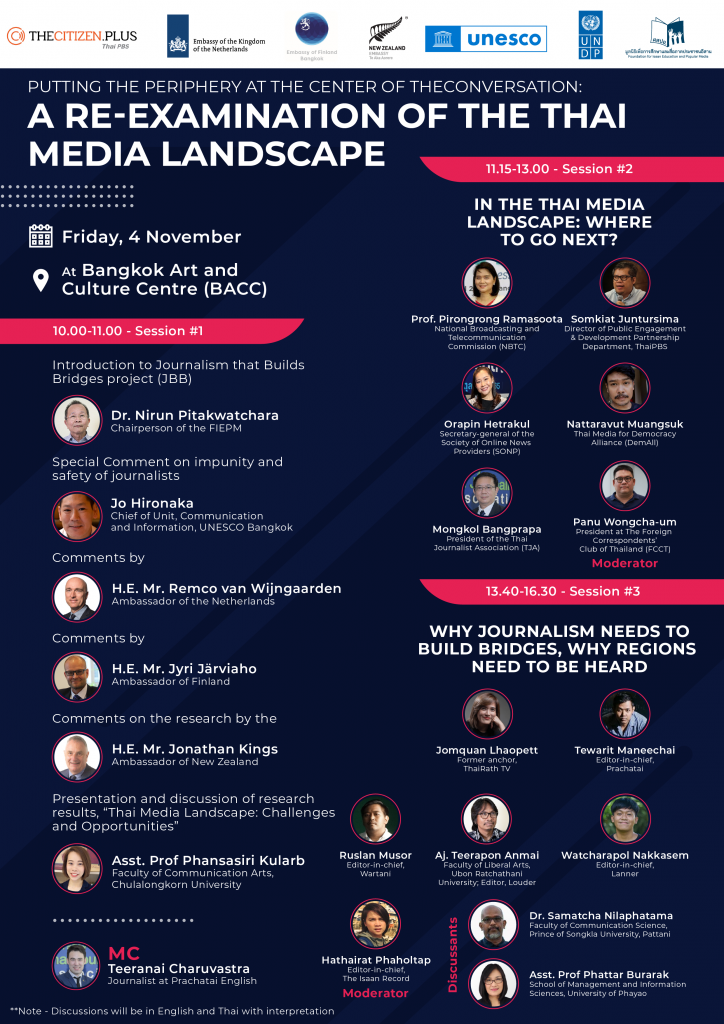 Note: Discussions will be in English and Thai, with interpretation.