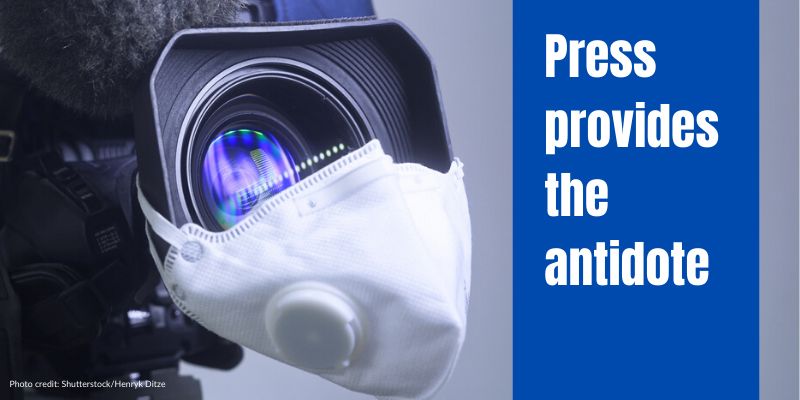 Disinformation, misinformation, “fake news”, hoaxes and inaccurate, distorted content – whichever term you prefer – is not a new phenomenon. The historical record traces at least as far back as Roman times. The difference now is that digital technology and social media spreads disinformation at an unprecedented speed and reaches wider audiences far beyond the traditional limitations of distance.

Since the beginning of the COVID-19 pandemic, we have seen parallel outbreaks of disinformation and misinformation about the virus, ranging from fake coronavirus cures, false claims and harmful health advice to wild conspiracy theories. Disinformation can in turn speed up the spread of disease, hinder effective public health responses, as well as create confusion, fear and distrust.

Facebook reports nearly 50 million pieces of content related to COVID-19 had to be flagged in April with warning label for disinformation, while Twitter challenged more than 1.5 million users for spreading false information and displaying “manipulative behaviours” during the same month. Close to 18 million scam emails about the coronavirus are being blocked by Google on Gmail.

Recognizing the challenges of information disorder and its harmful impact on journalism in Thailand, the Thai Media Fund and the private publishing house Bookscape organized an online public forum for journalists on countering “fake news” on 9 May in cooperation with UNESCO, Thai PBS and other organizations. The event was broadcasted via Facebook Live with nearly 100,000 views.

“During a pandemic, journalists and media workers play a lifesaving role in fighting the infodemics,” said Misako Ito, Adviser for Communication and Information, UNESCO Bangkok. To highlight the importance of journalists and media, she quoted UN Secretary General António Guterres’s message for World Press Freedom Day earlier in the month: “The press provides the antidote: verified, scientific, fact-based news and analysis,” Ms. Ito said. “He called on governments to guarantee that journalists can freely and independently do their jobs without any fear of interference or retaliation.”

In Thailand, there have been 30 to 40 cases of people charged since January under the Computer Related Crime Act (CCA) for creating or spreading “fake news”, according to Sarinee Achavanantakul, writer and managing director of Sal Forest Co. Ltd. This has raised concerns in civil society about the use of legal regulations to limit freedom of expression during a state of emergency. Ms. Sarinee also pointed that while the stated aim was to contain harmful “fake news”, disproportionate and extensive use of legal prosecutions also spread misunderstanding about the scope of CCA and limits on freedom of expression.

Similar to the global trend in recent years, mainstream media in Thailand has faced a serious credibility challenge while the volume of false information online has exacerbated the problem by putting media outlets at risk for sharing disinformation and harming the public trust. At the same time, digital transformation has posed economic challenges and pressures on the industry, from shrinking ad revenue to downsizing newsrooms and even closure of some media outlets.

While anyone can be a content creator in this digital age, professional journalists proves their value with expertise, ethics and accountability. Digital technology and the age of information abundance is clearly going to be affected by the rise of disinformation and misinformation.

To address this challenge, media and information literacy, particularly fact-checking skills, become essential for everyone. Supinya Klangnarong, co-founder of Cofact.org and former Commissioner for the National Broadcasting and Telecommunications Commission, said while journalists played an important role as gatekeepers, everyone in society should be aware of false information online and have the skills to verify information. “I want to create a culture where everyone can be a fact-checker,” she added.

The rise of mis- and disinformation can be seen as both challenge and opportunities for journalism to improve as a practice and institution. While it contributes to public distrust, it also provides opportunity for quality, ethical and responsible journalism to flourish and regain credibility. Prof. Charlie Beckett of London School of Economics and Political Sciences pointed to positive effects of “fake news” because it provoked debate and action.

Fact-checking and myth-busting networks, as well as platforms like Facebook, Twitter and Google, are taking action and more responsibility to separate facts from fake content. New tools and policies are being designed to help users to access quality information. More importantly, there is a renewed interest in media and information literacy as it is perceived as an essential tool to counter disinformation.

Today more than ever, as the world is in the face of global health crisis, we need quality and responsible news reporting, not only to identify disinformation, but also to provide sound public health advice and build community solidarity. Recognizing the changing communication landscape and the challenge of information disorder, UNESCO launched the “Journalism, ‘Fake News’ and Disinformation” handbook in 2018, which is available in 10 languages including Thai.

The handbook explores the nature of journalism with modules on why trust matters, thinking critically about digital technology and social platforms as conduits of information disorder, fighting mis- and disinformation through media and information literacy, fact-checking and social media verification, and combatting online abuse.

by Kamonwan Petchot, a programme assistant in communications and information unit of UNESCO Bangkok

*This article was first published in The Bangkok Post.