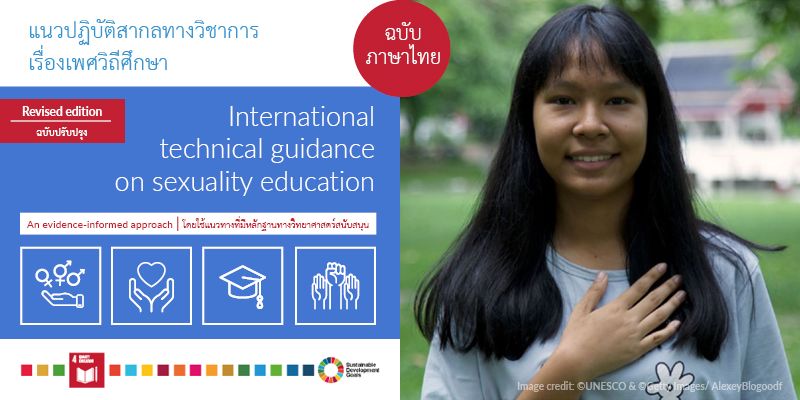 In early May 2019, Thailand’s Department of Disease Control announced a drastic increase in syphilis infections in the country, with more than one in three infections among children of school and college-going age. Between 2000 and 2014, Thailand experienced a 54-per-cent increase in teenage pregnancies, with adolescents accounting for one in seven of all pregnancies in 2016 nationwide. One in three students in Thailand report being bullied at least once in the past month, with physical appearance and not conforming to gender norms a key driver, a recent UNESCO report concluded.

To enable Thailand to strengthen CSE programmes and curricula in line with evidence-based “best practices” in the language spoken and understood by students, teachers and education policy-makers, UNESCO Bangkok, in collaboration with the Embassy of Sweden in Thailand, is releasing on 25 June 2018 the International technical guidance on sexuality education (ITGSE) in Thai.

UNESCO and other UN agencies held the global launch of the ITGSE in January 2018, complemented by the campaign “A Foundation for Life and Love” in September, which features parents and children from countries around the world – including a family from Thailand – to show why it is so important for young people to learn about health, relationships, gender, sex and sexuality.

The release of the ITGSE will be attended by officials from the Ministry of Education and other relevant ministries, heads of UN agencies and Embassies, civil society stakeholders engaged in CSE, school students, teachers and school leadership. The Government of Sweden, which provided funding for the revision of the ITGSE and UNESCO campaign, is hosting the event.

Media are welcome to the event by invitation.