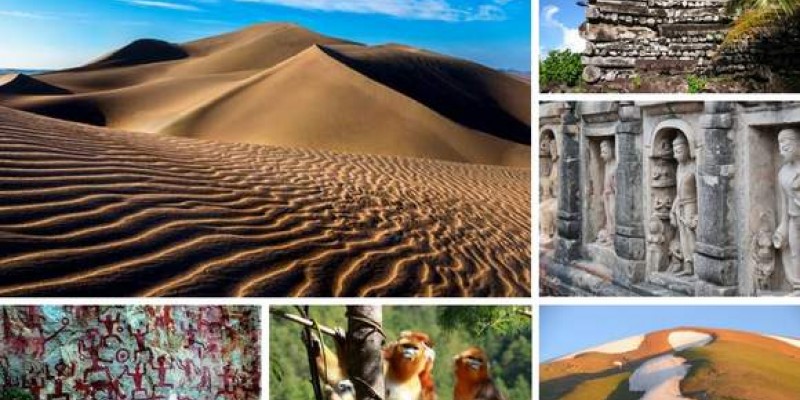 Out of 21 properties freshly inscribed onto UNESCO’s World Heritage List this year, over a third are in the Asian-Pacific region. From the last remains of the extinct bronze drum culture in south China, to the work of Le Corbusier in Tokyo, UNESCO has included natural landscapes as well as cultural gems to preserve. India, China and Iran can each boast two newly-listed sites, while the other two new additions can be found in Micronesia and Japan.

Archaeological Site of Nalanda Mahavihara (Nalanda University) at Nalanda, Bihar (India): These archeological remains of a monastic and scholastic institution in north-eastern India date back from between the 3rd century BCE and 13th century CE, making them the most ancient university of the Indian subcontinent. In service for 800 uninterrupted years, the site comprises important artwork and testifies to the development of Buddhism into a religion.

Nan Madol: Ceremonial Centre of Eastern Micronesia (Federated States of Micronesia): The Pacific islets of Nan Madol were built around 1200 to 1500 CE, during the flourishing times of the Saudeleur dynasty. Man-made walls of basalt and coral surround remains of temples and palaces that show a high level of sophistication, and still baffle engineers today. Fragile too, Nan Madol is also on the List of World Heritage in Danger.

The Architectural Work of Le Corbusier, an Outstanding Contribution to the Modern Movement (Japan):Tokyo’s National Museum of Western Art, designed by Le Corbusier, enters the List as the French architect’s work is recognized as an Outstanding Contribution to the Modern Movement. The aim of Le Corbusier was to break with the past, using 20th-century architectural techniques to answer new needs in society. His listed work also spans Argentina, Belgium and India, among others.

The Persian Qanat (Islamic Republic of Iran): An Iranian technique for quenching the country’s arid regions is the Qanat system, which diverts ground water to spread it across the desert using underground canals. The eleven Qanats of Iran are still in place, along with their original workers’ quarters and water reservoirs. They form a sustainable system that allows equitable distribution of water.

Zuojiang Huashan Rock Art Cultural Landscape (China): These 38 pieces of rock painting are the only remains of the Luoyue people, who adhered to the extinct bronze drum culture. Dating from between the 5thcentury BCE and 2nd century CE, the red paintings on white rocks are thought to represent bronze drum ceremonies – a rare glimpse into a culture once prevalent across south China.

Lut Desert (Islamic Republic of Iran): The Lut Desert is the set of other-worldly natural formations from June through October, due to strong winds, sediments and erosion. Hundreds-of-kilometers-long ridges, known as aeolian yardang landforms, appear in an ongoing geological process that UNESCO is seeking to preserve.

A total of 21 sites -- 12 cultural, six natural and three mixed -- were added to the UNESCO World Heritage list this year. For a full list of this year's new sites, click here.