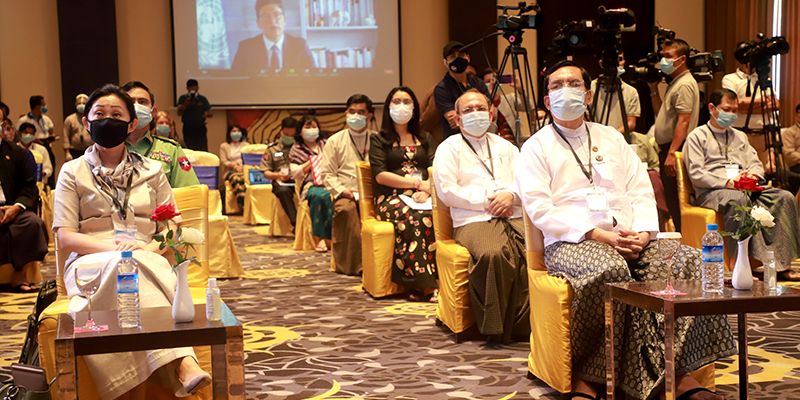 Journalists were working towards election integrity even before they cast their votes in Myanmar’s 8 November 2020 general election. About 1,000 local and foreign journalists and representatives of civil society organizations attended the 8th Media Development Conference held on 24 to 28 August 2020 with the theme “Media and Elections in Myanmar”.

The final report of the conference, organized by the Ministry of Information, Myanmar Press Council and UNESCO, was released just a few days before the general election.

Except for the opening and plenary discussion sessions, which were both in-person and online, the other four sessions were virtual through the Zoom platform and livestreamed on the Facebook pages of the Myanmar Press Council and the Conference’s own page.

Consisting of five panel discussions, participants exchanged insights and suggestions on how to ensure more in-depth and professional coverage of the country’s second general election since direct military rule ended in 2011. Among the issues discussed were the safety of journalists, ethical practices and self-regulation, news coverage in the age of social media, and challenges in reporting in ethnic states and regions.

The Conference is one of many projects initiated by UNESCO to support the full democratic transition of the country through free and fair elections. On 5 August, the Myanmar Press Council (MPC) in collaboration with UNESCO launched the Guidelines for Media during Elections, which provides specific provisions on responsible and ethical journalism practices.

UNESCO has also produced a series of infographics to provide the voting public with social media literacy skills that will help them to become discerning voters and influencers. The infographics have information about identifying fake social media accounts and online news sites, avoiding or addressing politically motivated hate speech, and practising health protocols when casting votes during the pandemic.

These initiatives, supported by the Multi-Donor Programme for Freedom of Expression and Safety of Journalists (MDP), would be useful not only for the general election, but also for the by-election scheduled in the first quarter of 2021, future elections and journalists’ daily work, Ms. Min Jeong Kim, UNESCO Myanmar Head of Office, said.  “Enhanced press freedom and journalistic skills during election coverage augurs well to post-election challenges that journalists face in their daily coverage of basic development issues,” she added.

“Journalists can responsibly and freely exercise their rights and freedoms during an election period is an excellent barometer of the presence or absence of these freedoms in the everyday lives of journalists and every citizen,” Dr. Moez Chakchouk, then UNESCO Assistant Director-General for Communication and Information, said in the keynote address.

The Conference Report can be downloaded in English and Myanmar.

The MDP strengthens UNESCO’s work at the global, regional and national levels by channeling funds towards emerging priorities and the most pressing needs to achieve its mandate on freedom of expression. It enables UNESCO’s Communication and Information Sector to address complex issues through the design and implementation of holistic and long-term media development interventions. This mechanism enables UNESCO and its partners to achieve greater impact and sustainability, while reducing fragmentation of activities in the same field.

To know more about how to protect journalists and freedom of expression, visit: https://en.unesco.org/themes/fostering-freedom-expression/mdp