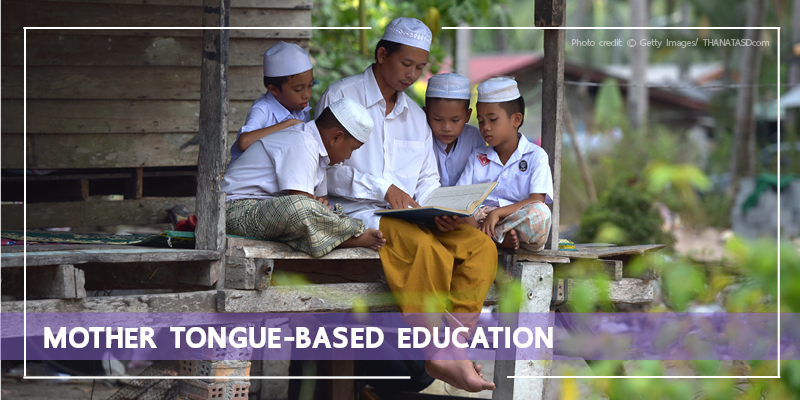 Think back to your very first day of school. Now imagine what it would have been like if you could not understand the language that your teachers were speaking. What would that be like? And how would you feel if you finished sixth grade, but still could not read or write?

That is the reality for an estimated 240 million children who do not have access to education in their first or home language. Many are in school, but not learning anything at all.

The United Nations’ International Mother Language Day on 21 February exists to draw attention to the importance of language in every part of our lives. While globalization has led to a rise in the use of English as a medium of instruction, we should not neglect the large body of global research showing that a child’s success across all academic domains is closely tied to having a strong foundation in the language they speak best.

Thailand is home to more than 70 languages. Some may soon become extinct, while others are spoken by hundreds of thousands of people, often living in border regions of the North and Deep South. The 2016 Multiple Indicator Cluster Survey conducted by the National Statistical Office with support from UNICEF found that one-third of youth in non-Thai speaking households were illiterate in Thai, despite spending many years in Thai schools. Clearly, Thai language “submersion” at school has not been effective for these children.

Yet there is hope. Since 2006, the Ministry of Education, the Thailand Research Fund, Mahidol University, UNICEF, Yala Rajabhat University, and local schools and communities have cooperated in the Patani Malay-Thai Multilingual Education Programme (PMT-MLE) in Thailand’s Deep South. Children learn to read and write in their home language before bridging to the national language through a specially-designed Thai language acquisition curriculum.

The results in the region, which is also affected by a long-running Malay insurgency, have been stunning. Even though pupils spend fewer school hours learning Thai, PMT-MLE students speak, read and write Thai much better than their Malay-speaking peers in Thai-only schools. Their grade 6 O-Net scores are higher, and their families are pleased with their progress. As one mother said, “My first son is in grade 5. There are so many Thai words he cannot read. My second son is in grade 1 in a PMT-MLE class, and he reads fluently. Now he’s teaching his older brother to read.”

Dr Virasakdi Chongsuvivatwong, leader of the Thailand Research Fund team that conducted evaluations of PMT-MLE in 2010 and 2015, reached similar conclusions.  “As we began our work, and I saw the positive impact of PMT-MLE, I realized that I could not be just a neutral evaluator,” he said. “I had to support the programme, and encourage the government to support it. As a medical doctor, I believe that PMT-MLE is the medicine to cure the disease of illiteracy.”

For this innovative project, Mahidol University received the UNESCO King Sejong Literacy Prize, while Yala Rajabaht University received UNESCO’s Wenhui Award for the Professional Development of Teachers (honorable commendation) for developing a multilingual education teacher training track and internships programme – the first of its kind in Asia. PMT-MLE is the only project in UNESCO’s 72-year history to be recognized with both of these prestigious prizes.

Similar mother language-based projects in Thailand’s north, run by the Foundation for Applied Linguistics in cooperation with the Pestalozzi Children’s Foundation, the Child Dream Foundation, and local education offices have helped Hmong, Karen, Mon and Lahu children.  Provincial education officials in Chiang Mai aim to expand these programmes as part of a seven-year plan to better meet the needs of its unique student populations.

Researchers in the United States found that migrant children’s school performance benefits from a mother tongue component; in fact, migrant children placed in English-only classrooms were found to have the worst-performance overall. Today, schools in Fort Worth in the US as well as Melbourne, Australia, offer mother tongue instruction to the children of ethnic Karen refugees from Myanmar.

Although many minority languages are endangered, mother tongue-based multilingual education has proven to be an effective means of respecting both the children’s first or home language and the national language. Moreover, if minority populations achieve higher rates of functional literacy in their mother tongue as well as the national language, they are more likely to gain wider access to skills, knowledge and practices of the country. This cultural capital strengthens material success in education and leads to greater stability and social cohesion.

Thailand should be proud of these globally-recognized success stories. The Ministry of Education and the government’s new Equitable Education Fund should ensure that these innovations become integrated into national plans and budgets. Indeed, the Royal Society of Thailand’s draft national language policy and the Office of the Basic Education Commission’s policy for fiscal year 2019 represent good steps in that direction.

The United Nations has declared 2019 the 'International Year of Indigenous Languages' with the tagline 'Indigenous languages matter for development, peace building and reconciliation'. On this International Mother Language Day, UNESCO calls on governments, community organizations and individuals to remember the great value of all languages.

By Risa Shibata, an intern for the Inclusive Quality Education section at UNESCO Bangkok, and Kirk Person, a director for External Affairs at SIL International

*This article was first published in The Nation