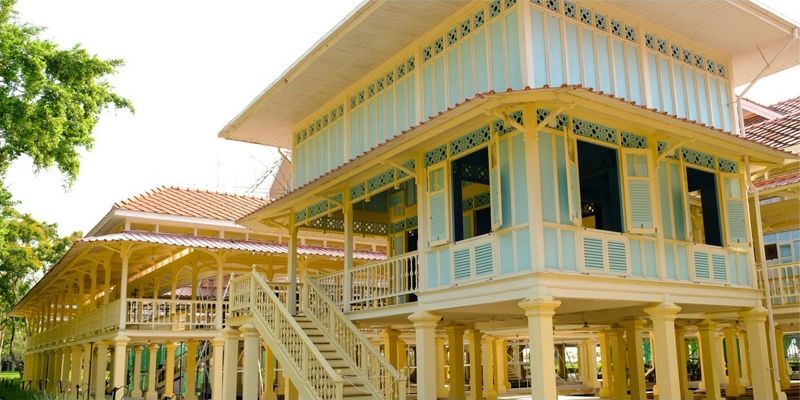 Does the conservation of history end at structures and artifacts or is it just as important to preserve the natural environment?

For close to a century, Mrigadayavan Palace in Cha-am district, Phetchaburi province has harmoniously cherished both Thai culture and its unique natural setting overlooking the Gulf of Thailand.

The 2021 UNESCO Special Recognition for Sustainable Development Award provided to Thailand’s Mrigadayavan Palace underlines the fundamental role that sustainability plays in cultural heritage and that the environment of a historical site is just as important as its man-made structures.

Mrigadayavan Palace was commissioned by His Majesty King Vajiravudh, or King Rama VI, ruler of Siam from 1910 to 1925, to serve as his seaside residence during the latter years of his reign. The monarch’s personal physician had recommended he spend more time by the ocean, so that his rheumatoid arthritis could be eased by its warm air and abundant breezes.

In 2021, the Mrigadayavan Palace Woodshop was honored with a Special Recognition for Sustainable Development as part of the 2021 UNESCO Asia-Pacific Awards for Cultural Heritage Conservation, joining the Nizamuddin Basti in India, Kesennuma Historic Citiscape in Japan, and Shajing Ancient Fair in China. The Special Recognition was earlier introduced in the 2020 Awards cycle for projects that “promise a significant impact in contributing to sustainable development.”

On the acknowledgement, UNESCO explains:

“Built entirely from recycled timber salvaged from a disassembled building in Bangkok and relying on passive ventilation, the woodshop sits lightly on the site and in harmony with the historic trees. Its use as a training facility for conservation carpenters celebrates Thai timber building traditions and contributes to their continuity.”

According to its own website, “The environment has always played an important role in Mrigadayavan Palace… King Rama VI chose the site for Mrigadayavan Palace due to its easy access to the capital, pleasant beachside environment, and abundant underground freshwater resources.” The palace even derives its name from the wildlife that inhabit its location, with mrigadayavan meaning “forest of the hog deer.”

With respect to the area’s natural splendor, King Rama VI personally designed Mrigadayavan Palace to be a humble residence with minimal impact on its location. Combining Thai and Western architectural influences, the palace’s 16 teak buildings integrate into their natural setting and exist in harmony with the environment.

Further underlining the value given to the palace’s environment, the grounds and surrounding area were royally proclaimed a wildlife sanctuary in 1924 before additional conservation was ensured in 1981 when it was registered as a historical site.

In 1992, the Mrigadayavan Palace Foundation was established to oversee the compound, including the completion of its second restoration. The foundation outlined an intention to restore the palace, including its natural surroundings, to its original condition in 1924 to honor the wishes of King Vajiravudh.

Today, sustainability and environmental conservation are explicit features of Mrigadayavan Palace. Its mission statement includes a Principle of Conservation that proclaims, “Mrigadayavan Palace is a national heritage site that undergoes continuous restoration to preserve its architectural, cultural, and environmental heritage.” Keepers of the palace intend for it to “serve as a case study for sustainable development and conservation.”

Ongoing environmental restoration projects being carried out in relation to the palace include the Department of Marine and Coastal Resources’ (🇹🇭) removal of man-made coastal structures from the nearby shoreline and the planting of a garden replicating the area’s original beach forest.

More recently, New Theory Agriculture projects and Sufficiency Economy Philosophy programs based on the teachings of His Majesty King Bhumibol Adulyadej the Great have added to sustainability at the palace, both philosophically and practically, with the planting of vetiver grass to counteract erosion an example of a how the late king’s lessons are being applied as real-world solutions.

Preventing coastal erosion has become a major objective of the palace. Its geography makes it particularly susceptible to the shoreline degradation exacerbated by climate change. After initially addressing erosion using coastal constructs such as breakwaters, studies supported by the palace found unwanted ecological and socioeconomic impacts. Based on these findings, more sustainable remedies, such as the vetiver grass approach, were adopted, in keeping with the environmentally-friendly intentions of the palace.

All of these sustainability considerations and practices to preserve the grounds of the Mrigadayavan Palace have contributed to UNESCO’s awarding of a Special Recognition for Sustainable Development.

In 2021, the palace joined in hosting a competition searching for the Kingdom’s top traditional wood artisans. Supported by the Ministry of Culture, UNESCO, and Mrigadayavan Palace Foundation, competitors were tested on their wood carving skills to promote the Thai heritage of woodworking.

Most relevant to its recognition for sustainability, however, the Palace was cited in 2020 by the Ministry of Natural Resources and Environment when it launched studies into coastal erosion across over 89 km of shoreline in Cha-am. The office tapped relevant agencies to look into how to stop the erosion and sustainably restore the stretch, remarking on the care given to the issue by Mrigadayavan Palace. Officials stressed that any action taken should support ecosystem restoration, echoing the sentiments of Mrigadayavan Palace Foundation.

The award-winning conservation work done at Mrigadayavan Palace is a noteworthy example of a new paradigm in preservation, one that accounts for both history and the environment. By viewing its natural setting as part of its ideal state, Mrigadayavan Palace has harmoniously unified cultural and ecological conservation, maintaining its historical structures and artifacts with environmental sustainability.

Most importantly, Mrigadayavan Palace affirms that history is more than relics and monuments, that care for the environment is another way to express appreciation for the past.