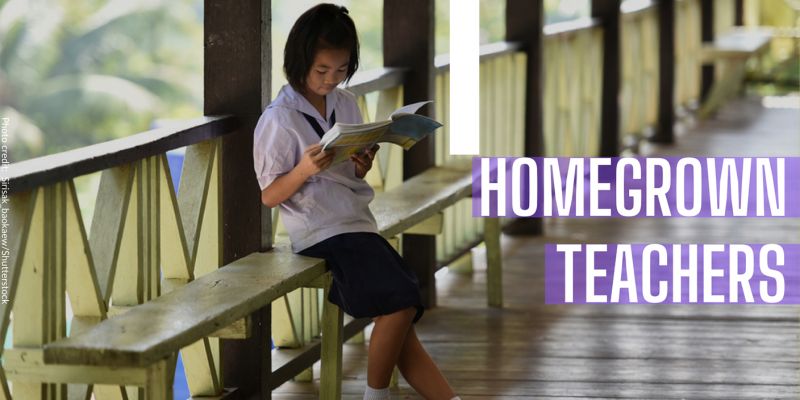 May, Fah and Muey look like ordinary Thai girls, perhaps a bit shorter and shyer than many of their classmates at Chiang Mai Rajabaht University.  But thanks to a new teacher recruitment programme, they are superheroes in the making.  And today is their day.

Thailand is a case in point. Far from being a monolingual nation, the country’s  70 million citizens speak more than 70 mother tongues.  Many of these languages are found in remote border villages such as the Karen, Hmong and Lahu communities where May, Fah and Muey grew up. May’s mother tongue, for example, is Sgaw Karen, while Fah grew up speaking Hmong and Muey Lahu.

Some of the widest social gaps in Thailand are connected to language and ethnicity.  Research by the National Statistical Office and UNICEF revealed that only 65 per cent of ethnic youth aged 15-24 are literate—far below the national average of 98 per cent.  Oxford University’s Poverty and Human Development Initiative found that Mae Hong Son Province, where ethnic minority people comprise 60 per cent of the population, has the highest severity of multidimensional poverty in the nation.  Ethnic minority children in the northern and southern border provinces consistently post the lowest scores in Ministry of Education national exams.

Thai researchers have discovered that such children learn Thai better if their early education is based on their mother tongue. Hmong children in Chiang Rai in a Hmong-Thai multilingual education programme scored much higher in Ministry of Education Thai language literacy assessments across grades 1-5 than their peers in Thai-only schools.  Essays written by Patani Malay-speaking third graders who first learned to read and write in their mother tongue and then transitioned to Thai displayed a more extensive Thai vocabulary and richer variety of Thai sentence structures than Patani Malay children elsewhere in the Deep South who were taught exclusively in Thai.

Thailand’s mother tongue-based multilingual education programmes have received international acclaim, winning the 2016 UNESCO King Sejong Literacy Award and Honorable Commendation from the UNESCO Wenhui Award for Educational Innovation in both 2013 and 2017.  They have been featured in numerous United Nations-sponsored conferences and international academic journals.

These accomplishments have not gone unnoticed. The Ministry of Education’s National Education Plan (2017) supports “teaching and learning by integrating the curriculum in accordance with local languages, cultures, and local society”.  Other policies encourage the preservation of languages spoken by ethnic minority children in “highland areas, remote beaches and islands”. The Royal Society of Thailand’s draft national language policy, currently under cabinet consideration, envisions a multilingual nation where citizens are fluent in their mother tongues, Thai and international languages.   And Thailand was one of the first nations in Asia-Pacific to affirm the Bangkok Statement on Language and Inclusion, which emerged from high level discussions facilitated by UNESCO and UNICEF just prior to the pandemic.

May, Fah and Muey are beneficiaries the Equitable Education Fund’s “Homegrown Teacher” Programme, which provides hundreds of teenagers from remote areas with university scholarships, mentoring and the promise of a teaching job in their home village after graduation and licensure. From Monday through Friday, they take the normal university classes required of all future teachers. On weekends, they learn practical skills such as gardening and organic soap making. During the summer, they will receive specialized training on mother tongue-based multilingual education and innovative techniques for teaching Thai to ethnic minority children.

Like their future pupils, May, Fah and Muey did not speak Thai when they started kindergarten. They learned Thai the slow way, repeating words learned by rote from their teachers and reading phonetically without understanding the meaning. Until they were about 12, all three did everything possible to avoid conversations with their teachers, none of whom spoke their mother tongues.

That is where the “homegrown teachers” have an immense advantage over urban teachers from top universities, simply by being able to converse with their students. As cultural insiders, they will be able to rally community support for education. They will be models for the next generation, who otherwise might never meet a university graduate from their own ethnic group. And in so doing, they will contribute to Thailand’s national development.

With young people like May, Fah and Muey, coupled with innovative, evidence-driven education policies, Thailand is positioned to become a model multilingual nation, where citizens of all ethnic backgrounds are accepted, appreciated and successful. That would be a true cause for celebration—and not just on International Mother Language Day.

Kirk R. Person, PhD, is a Senior Literacy and Education Consultant with SIL International, and a member of the Asia-Pacific Multilingual Education Working Group, hosted by UNESCO Bangkok.