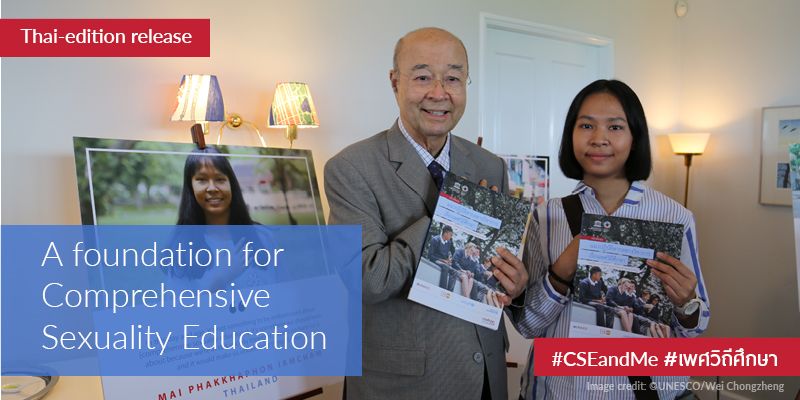 Thailand first introduced a sex-education curriculum four decades ago. Since then, concepts of sexuality education have continued to evolve, reflecting a much more expansive understanding of students’ well-being, not just in terms of sexual and reproductive health, particularly the central role that gender plays in their understanding of themselves and the world around them, but also their social and emotional welfare.

Thailand’s revision of health and physical education textbooks for grades 1-12 released in March reflects the centrality of gender and rights, which are at the heart of comprehensive sexuality education (CSE), a curriculum-based process of teaching and learning about the cognitive, emotional, physical and social aspects of sexuality.

The Ministry of Education should be recognized for the progressive measures recently adopted and its promotion of CSE mandated under the Adolescent Pregnancy Bill. Yet there is more work to be done. A review of CSE from across Thailand, released in 2016 by UNICEF and Mahidol University, with the support of the Ministry and UN agencies, found that students lack knowledge about contraception and lack the communication and negotiation skills. The review also pointed to attitudes that reject gender equality, with roughly half justifying domestic violence.

Half of all teachers surveyed were not properly trained to teach sex education and half of students were embarrassed and uncomfortable discussing the topic. A key recommendation was that greater emphasis should be placed on teaching about gender, sexual rights, societal power structures, respect for the rights of others, and attitudes that support gender equality and gender/sexual diversity.

International guidelines on CSE can address these issues, but crucially they must be conveyed in the language in which students, teachers and policy-makers are most fluent. The launch on 25 June of the Thai-language International technical guidance on sexuality education provides a vital resource to teach the knowledge, skills and attitudes that are essential for safe, healthy and respectful relationships. The event, organized by UNESCO Bangkok in partnership with the Embassy of Sweden in Thailand, convened education policy-makers, high-level diplomats, activists and sexuality education experts, as well as teachers and students, as a starting point towards an ambitious goal. As the principles are implemented in curricula across Thailand, this guidance could have life-changing positive consequences for generations of Thai students and the wider community.

In some respects, Thailand already stands out as a model for addressing sexuality related social norms. In a decades-long campaign beginning in the 1970s, former Senator, activist and educator Mechai Viravaidya has led efforts to promote condom use, family planning and HIV and AIDS awareness, employing everything from innovative teaching demonstrations and pioneering distribution channels to founding schools and a trendy restaurant chain. Mr Mechai’s work both in and out of schools has transformed conversations on these issues, and quite literally saved the lives of millions of people.

Recent headline news, however, reminds us that CSE does not allow complacency and efforts must be renewed with each grade of schoolchildren and young adults at age-appropriate levels. An announcement by the Department of Disease Control in early May warned of a major spike in syphilis infections, particularly among children and young adults, suggesting an increase in unprotected sex with attendant risks of unintended pregnancy and other sexually transmitted infections (STIs) including HIV. According to UNICEF data, teenage pregnancies in Thailand rose by 54% between 2000 and 2014, with one in seven involving adolescents, which is also strongly indicative of increasing sexual activity at younger ages.

The 2016 review showed that CSE is very effective in teaching students about different aspects of sexuality, including related behaviour and risks of pregnancy and STIs including HIV. There is also evidence that age-appropriate education starting at the age of 5 improves skills and attitudes related to gender and rights as well as improves communications with parents.

However, CSE is more than just providing for sexual health, as essential as that is. A recent UNESCO report found that one in three students reported being bullied in the month prior to the survey, often on the basis of physical appearance and gender nonconformity. The 2016 review reported that there was little awareness about bullying based on perceived sexual identity and other social power structures. Research shows that cyber-bullying in Thailand is often considered an “ordinary matter”. These are trends that can have serious negative real-world consequences for students and their relationships.

Starting at a young age, CSE equips children and young people with knowledge, skills, attitudes and values to realize their health, well-being and dignity as well as develop respectful social and sexual relationships. Young people must be empowered to make informed choices and understand how their attitudes and behaviour affects themselves and others.

The International technical guidance on sexuality education was launched worldwide in 2018 in a joint effort by UNESCO, UNAIDS, UNICEF, WHO, UN Women and UNFPA, along with the UNESCO campaign “A foundation for life and love” including insights from a Thai teenager and her family. The guidance is being translated into multiple languages to provide a state-of-the-art framework for Ministries of Education and other policy-makers to strengthen CSE curricula.

The revised guidance and the launch of the Thai-language edition was made possible with the support of the government of Sweden. The Swedish people have a strong and enduring commitment to sexuality education both at home and for our friends in other countries, having been the first country to introduce a mandatory curriculum in 1955. Since then, that curriculum has been continuously updated, particularly with an understanding of the strong linkages with gender equality education.

A shared understanding of comprehensive sexuality education and the spaces that young people inhabit is imperative. We all remember what it was to be like to be children and young adults, with all of the questions, insecurities and doubts associated with their developing sexuality. In Thailand, we can and must do better to provide children and young people with the “foundation for life and love” to enjoy healthy and respectful relationships.

By Shigeru Aoyagi, Director of the Asia-Pacific Regional Bureau for Education of Unesco Bangkok, and HE Staffan Herrström, the Swedish Ambassador to Thailand, Lao PDR and Myanmar.