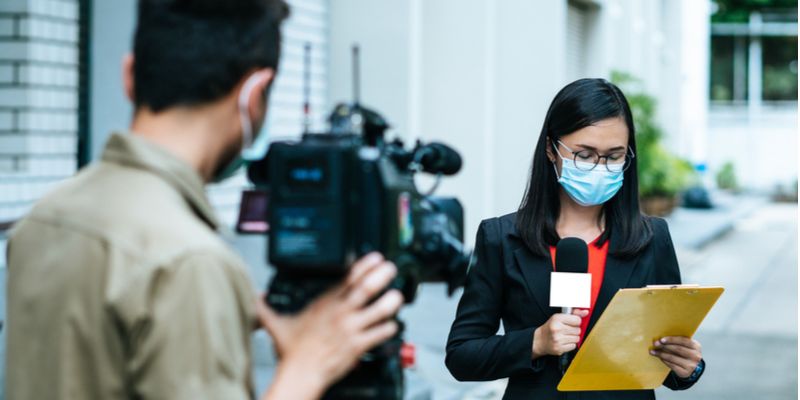 For journalists around the world, 2020 will be an unforgettable year. From the global coronavirus pandemic, confusion about climate and science, to political elections, racial and religious conflicts, people have urgently called for professional journalism to bring them timely and true information. Journalists have to handle heavier workloads and also protect themselves in an increasingly complex offline and online environment.

The lives of many journalists are under threat even in relatively peaceful times. Over the past two years, UNESCO recorded the killings of 156 journalists worldwide, including 49 in Asia, two of whom were women. This gender gap can be partly explained by the prevailing stereotypes about women journalists and their physical and psychological capacities. Currently, there are fewer women journalists working in dangerous areas and, at least in some regions, fewer assigned to cover sensitive topics such as political corruption or organized crime.

While women journalists are not the majority of victims of fatal attacks, they are disproportionately targeted by online gender-based violence that puts their safety at risk. UNESCO and the International Centre for Journalists recently launched a survey on this issue, which has collected more than 1,200 responses from around the world. The survey is part of a global UNESCO study on effective measures to address online violence against women journalists, and a full report will be published by early 2021.

One of the key findings is that 73 per cent of women journalists have experienced online violence related to their work, including threats of physical and sexual violence, along with digital security attacks. Twenty per cent have been abused and attacked offline in connection with online violence.

What is striking is that harassment against women journalists often takes the form of personal attacks, including doxxing, which do not tend to focus on the content of their reporting, but instead on the woman’s character or body parts. In more extreme cases, cyber abuse includes threats of rape or other sexual violence.

Freedom of expression and press freedom are pillars of a healthy democratic society. Enhancing the safety and capacity of women journalists is necessary to achieve comprehensive gender equality in a country, and also a positive factor ensuring public access to information and the voices of all vulnerable groups are heard.

In 2012, the United Nations Chief Executives Board endorsed the first UN Plan of Action on the Safety of Journalists and the Issue of Impunity. As the organization leading the implementation of the plan, UNESCO supports a number of projects improving the safety and capacity of women journalists.

In Asia, on the occasion of the Human Rights Day on 10 December 2020, OHCHR Regional Office for South-East Asia and UN Women for Asia, in partnership with UNESCO, launched a regional training programme entitled Enhancing the Protection of Women Journalists and Women’s Human Rights in the Context of Shrinking Democratic Space in Asia. The programme consists of a series of online self-paced modules, followed by live webinars for 41 journalists and media workers across 15 countries in the region. The training will run from December 2020 to July 2021 and aims to raise awareness, exchange experiences, build networks, and strengthen the protection capacity for journalists and media workers, including in the area of digital safety and engagement with youth groups. It is hoped this in turn will strengthen the rights of women and girls in the region and promote the enhanced use of the UN mechanisms for protection.

It is equally important to analyze the motives in different cases involving the killing or harassment of woman journalists. If attacks can be classified as “gender-based and gender-targeted”, that helps to distinguish common problems and risks faced by all journalists, so as to defend gender equality in the media industry. When journalist stands on the invisible frontlines, their safety must be seen.