How can journalists foster gender equality in the media? Women Make The News Thailand | UNESCO Bangkok Skip to main content 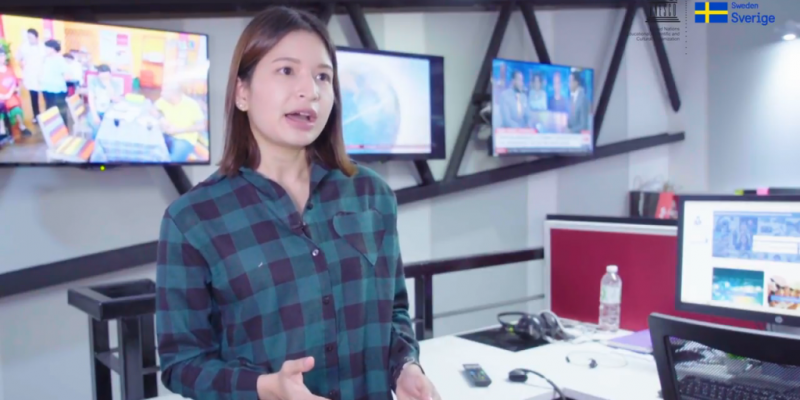 What can journalists do to foster gender equality in the media in Thailand? That question, posed to Thai PBS journalists, reporters and producers, as well as 14 participants from the outlet’s censorship and programming departments, was centre-stage at the 19 September workshop co-hosted by UNESCO Bangkok and the public broadcaster. Participants collaboratively proposed recommendations and a ‘to-do’ list for media professionals working for equal representation of men and women in the news, with brainstorming sessions emphasizing the importance of women in society as well as the role and use of online media and digital tools to enable more equal gender visibility.

The workshop began with a presentation of UNESCO’s Women Make The News project, which seeks to feature women’s voices in contemporary media. Misako Ito, UNESCO’s Adviser for Communication and Information, shared insights on gender research data that showed that women account for only 25% of people featured or quoted as experts in the news in Thailand. That finding is a primary motivation behind the creation of a database of female experts for journalists’ reference.

Participants at the workshop were encouraged to think about their previous experiences and share inspiring stories divided into four categories: Compelling cases from work, consistent problems, issues that felt significant, and what surprised them the most. The discussion showed that in most cases media addressed women only when they were victims or there was a sensitive issue in their stories. ‘To let a woman speak, she needs to have a negative experience,’ one participant said.

Pharkphoom Vougsakul, producer of the ‘Thailand Live’ programme, referred to the recent high-profile story of the boys’ football team that became trapped in a cave in Chiang Mai. When he arrived at the site, there were many women helping with the operation, but the media for the most part depicted men’s activity, an example of the more general trend of unfair coverage in male-dominated fields. Another example is that female police officers or soldiers will rarely be interviewed because it is stereotypically presumed that depictions of men will look stronger.

Another important question raised during the workshop was about the support the media need to advocate for gender equality. Trust, it turns out, is a key aspect in achieving this goal. Phunchanika Chuaynukit, Thai PBS’s Chief Producer of Program Bureau, said: ‘There is a need for the change in the chiefs’ mentality and perception. Often times, it is the person in power who gives the interview, and historically, the chiefs are men, while women are those who are working directly on the implementation of the projects, and it is important to see them as equal experts to refer to. That is how we can break an initially limited space given for women to speak in public.’

Another important issue regarding the modern news environment is the lack of policies and mechanisms that could protect and elevate women’s voices. Participants said there should be a unified code of ethics advancing women’s rights and changing how journalists cover the news. Media outlets working with outdated and conservative internal regulations now need to review and rethink existing norms.