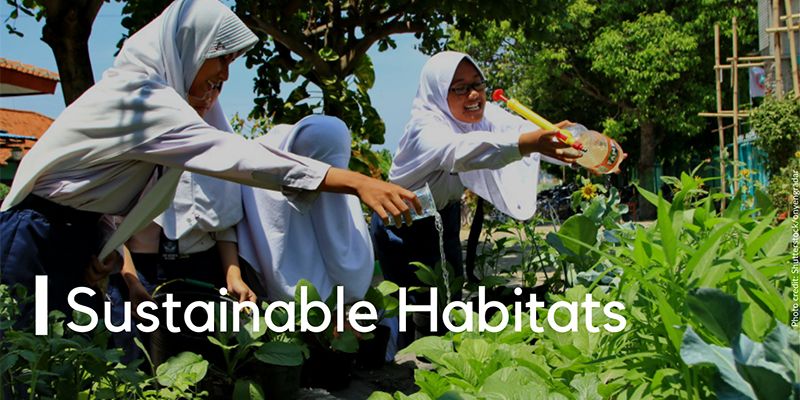 The rule of three states that three minutes without air, three days without water or three weeks without food, most people would perish. Only Planet Earth and healthy, vibrant ecosystems provide these essential services, which are being relentlessly put under unsustainable pressures. Without a fundamental shift in mindsets and behaviours, it is the future of humanity that hangs in the balance.

Humans are the cause of these problems – almost two-thirds of the impacts related to atmospheric and ocean temperature can be attributed to anthropogenic forces, according to the journal Nature. But humans can also be the solution by innovation and sustainable development in shaping our habitat. This is the basis of UNESCO’s Green Academies, which engage young people and their communities to transform existing buildings such as schools and offices into climate-resilient structures.

The climate crisis in tandem with population growth has already had major observable effects on the environment, with inevitable consequences for human communities. Glaciers have shrunk, species’ ranges have shifted and shrank, plants and trees are flowering sooner with serious consequences for interdependent ecosystems. Meanwhile, the careless waste of tremendous amounts of water, electricity and food is the hallmark of most people’s consumption patterns.

Young people did not cause this situation, but inevitably it is their responsibility to protect the planet for a more livable tomorrow. If 1.5 billion school children around the world integrate conservation into their thinking and actions, and 3 million schools are transformed into green buidlings, the seeds for sustainable change are planted. Student awarness and behaviour can have a multiplier effect on friends, parents and communities.

UNESCO Green Academies are designed to convey ideas about environmental protection to students at an early age, empower them to create a world they want to inherit, and propose practical, replicable and affordable changes to buildings to address imbalances and contribute to more sustainable ways of life.

The initiative focuses on four pillars of water security, clean energy, biomass production and waste management, based on organizing youth clubs. The academies can improve sanitation and access to drinking water and reuse wastewater through sanitation. Locally generated energy such as biogas, biomass, wind, solar, hydropower and other types of energy can replace polluting centralized production with renewables. Campuses can also produce their own food, fodder to feed animals and generate biofuel, and reduce, reuse and recycle to reshape waste management systems.

Through youth clubs, students can become the custodians of Green Academies, in which they learn how facilities function and how to maintain them. Another objective is to foster students’ understanding of environmental issues such as loss of biodiversity, differences in temperatures and sea levels, deterioration of ecosystems, increasing extreme weather events and changing climate patterns. Those lessons can be applied to Academy premises, for example by informing which clean energy or biomass production is most appropriate.

Based on this methodology and a local gap performance analysis, in April 2016 UNESCO partnered with the local community to transform Beza Bezuhan Academy, in Ethiopia’s Lake Tana Biosphere Reserve, into the first Green Academy. A rainwater harvesting system was installed to collect rainwater from the roof of the school, with an iron-cement, 100m³-capacity tank and a pump to divert the water to the school’s new organic vegetable garden.

A reed-bed wastewater treatment compartment based on indigenous grasses such as papyrus and elephant grass were constructed to purify greywater, with the water reused for the school garden and toilet flush. Solar panels produce stable energy supply even during power cuts, while a bio-gas plant, with a capacity of 10m³, was connected to school toilets to generate bioenergy.

The model can be implemented in schools across the world and tailored to local contexts. Sukhothai Thammathirat Open University (STOU) in Thailand is working to qualify for the UI GreenMetric World University “green” qualification based on the six indicators of infrastructure, energy, water, waste, transport and education. Since 2017, the university has been operating a new building covered in vegetation, with the roof covered in an on-grid solar system and rainwater collection pipes.

Looking to the future, UNESCO Bangkok is collaborating with partners including international organizations such as UN Habitat and SEAMEO, academic institutions such as STOU and the Asia Institute of Technology, schools and the private sector, and diverse companies such as the educational provider PAPINEE and major conglomerates such as Saudi ARAMCO, to build more Green Academies in the Asia-Pacific. New partnerships with UNESCO and the private sector are very welcome.

There is much more to do if we are to protect the planet. The challenges posed by the climate crisis and environmental degradation are major, but the solutions are within our hands if we choose to implement them.

* A version of this article was first published in SciDev.net