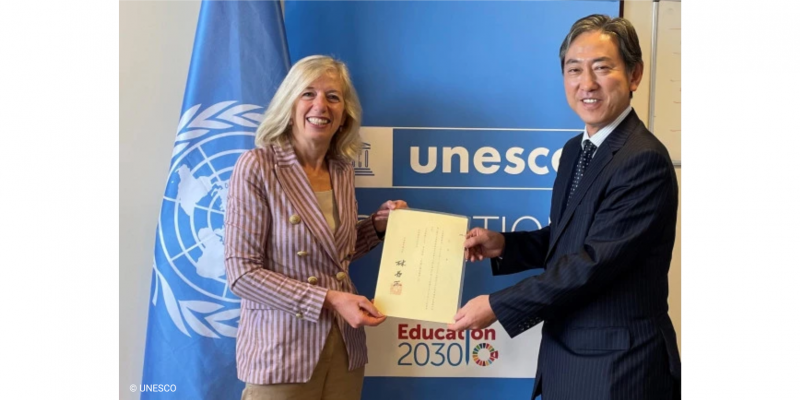 On 13 September, Japan became the 17th country in the world and first in the Asia-Pacific region to join the Global Convention on the Recognition of Qualifications concerning Higher Education, bringing it one step closer to its entry into force.

Japan is also a State Party to the regional Tokyo Convention, which caters to the specificities of the Asia-Pacific region and is implemented in complementarity with the Global Convention.

The Global Convention – adopted by UNESCO Member States in 2019 – represents the first United Nations treaty in higher education of global scope. It is a global tool to strengthen research cooperation by facilitating international exchanges of students, faculty, researchers and jobseekers across countries and regions.

This is particularly significant given the changing higher education landscape. Over the past two decades, enrolments have doubled to reach 235 million students, while international student mobility has tripled to 6 million – figures that are once again set to double in the next decade according to the UNESCO Institute for Statistics.

UNESCO’s Higher Education Conversation series is helping to develop capacities on the technical aspects of the Global Convention, addressing issues such from quality assurance to the role of universities, The series, which kicked off a second round in September 2022, has trained over 3,000 participants from national recognition authorities and higher education stakeholders to date.

At least twenty (20) countries need to ratify the treaty in order for it to enter into force three months later. In the past year alone, 12 have done so, reaffirming their commitment to raising the quality of higher education, strengthening international cooperation and helping make academic mobility and the recognition of qualifications a reality for millions.

The article was first published here.