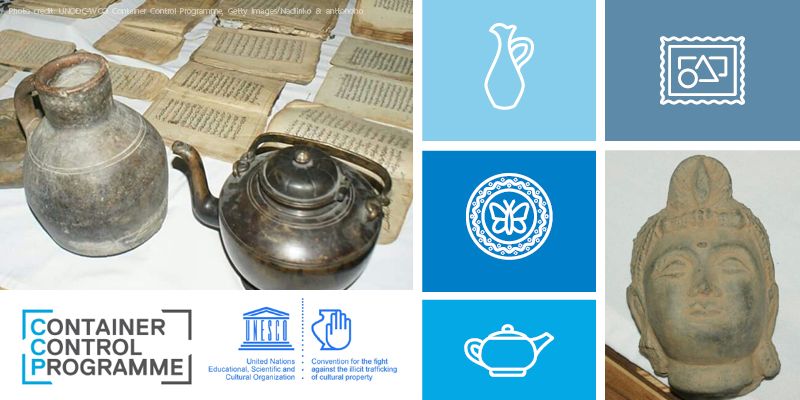 Bangkok: In seemingly legitimate stores across South-East Asia, cultural objects – banned from sale and export – are being sold alongside replicas in ‘antique shops’, where staff readily explain to customers the trafficking routes they use to ship the items to foreign countries. The open market in such items is brazen, but just the most visible example in the expanding networks of organized crime involved in the large-scale trafficking of cultural property.

Each theft of cultural property, each item trafficked abroad, chips away at cultural heritage and harms our shared connections to the region’s past. Yet the trade continues in bulk, increasingly linked to and reinforcing other criminal activities such as the drugs trade and human trafficking.

Since the 1970 Convention to prevent the illicit trade in cultural property, there has been growing recognition that a multinational, multi-sectoral effort is required to stem the flow. From 4-7 March 2019, UNESCO and UNODC are hosting the workshop ‘Countering Trafficking of Cultural Objects in the Containerised Supply Chain’ as an advanced training of the UNODC-WCO Container Control Programme. The workshop in Bangkok will bring together customs, police and culture officers from Cambodia, Lao PDR, Myanmar and Thailand in response to a recent assessment calling for more inter-ministerial and multi-agency collaboration.

The UNODC-WCO Container Control Programme (CCP) was established as a partnership between the United Nations Office on Drugs and Crime (UNODC) and the World Customs Organization (WCO) in 2004. The overall objective of the Programme is to assist Member States prevent the contamination of the international trade supply chain with illicit and hazardous goods in containerized cargo at sea, on land, and in the air. Containerized shipping is a crucial feature of the global trade supply chain and a key component of sustainable development in low income countries. Organized crime groups and other criminal actors, however, exploit weaknesses in cargo security to transport illicit goods that threaten to harm society and strip countries of their valuable cultural heritage.

The sheer volume of international shipping, with more than 720 million containers transported by sea each year, makes transborder trafficking an enormous challenge demanding an international response.

The workshop will conclude with recommendations on coordination mechanisms between agencies and countries, possible regional operations based on risk profiles and outcomes of the workshop, and the expansion of multi-agency Port Control Units focusing on disrupting the trafficking of cultural property,

The training will focus on international and national legal frameworks concerning illicit trafficking, as well as an introduction to the criminal trade in in the sub-region and routes, actors and markets. Cultural officers from all four countries will provide guidance on recognizing protected cultural objects, including the provenance and typology of objects commonly trafficked.

Thailand’s National Museum Storage Facility will also host a tour of collections of stored museum items as well as confiscated objects from closed and unclosed criminal investigations, including training on best practices for the handling and storage of cultural objects. Over the course of the workshop, trainers and facilitators will include staff and experts from UNESCO, UNODC, OSCE, the World Customs Organizations Regional Intelligence Liaison Office, Interpol National Central Bureaus and the Italian Carabinieli, as well as national cultural experts. The training is made possible by funding provided by the Government of Japan.