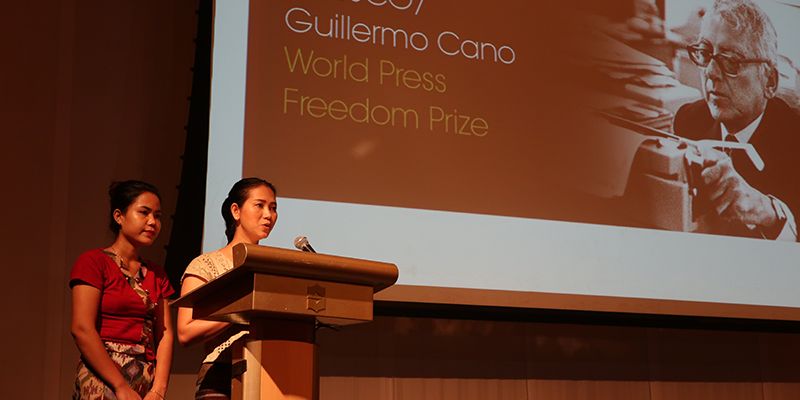 The crackdown on media professionals in Myanmar and demand for greater access to information featured prominently as World Press Freedom Day was marked by three major events organized in Yangon on 2 and 3 May, including journalists, the Press Council, diplomats and human rights activists stating their concerns.

Myanmar reporters Wa Lone and Kyaw Soe Oo, who have been awarded the UNESCO/Guillermo Cano Press Freedom Prize as well as the Pulitzer Prize, were honored at an event organized by UNESCO and the Embassy of the Netherlands. Just days before the two journalists’ historic release, their wives, Pan Ei Mon and Chit Su Win, read a message sent by their husbands: “We feel encouraged by the support that we are receiving from the international community, and this award gives us strength.”

The event, held in Yangon on 2 May, was attended by more than 200 participants from the diplomatic corps, Myanmar Press Council, National Human Rights Commission, media community, human rights activists and civil society organizations. It included two panel discussions on this year’s global theme for World Press Freedom Day: “Media for Democracy, Journalism and Elections in Times of Disinformation”.

“With the Myanmar 2020 general elections approaching quickly and given the expanded number of media and ever increasing number of social media users in Myanmar, the need to discuss and implement initiatives to counter misinformation and hate speech, especially in social media, must begin today,” Min Jeong Kim, Head of UNESCO Myanmar, said. “Critical steps are needed to guarantee a professional and ethical reporting of the electoral process by strengthening the media as a guarantor of free and fair elections.”

“And by facilitating access to information and establishing channels of communication between the media and information sources, we need to support the media to respond quickly to false online information with professional and fact-based reporting.”

According to a recent report by the Yangon-based freedom of expression advocacy group Athan, there have been 23 cases brought against the media under the Telecommunications Act with 31 journalists put on trial. “If journalists are attacked, if the media is discredited, public trust in democratic institutions is also at stake,” Ms Kim said. “This in turn could lead to a backslide in the democratization process.”

An event organized by the Myanmar Press Council on 3 May highlighted similar issues. U Ohn Kyaing, Chairperson of the media self-regulatory body, insisted on the importance of abiding by the News Media Law in cases related to journalists, rather than prosecuting them under the penal code. At the same event held at Yangon City Hall, the Union Minister of Information emphasized the dangers of disinformation online, which is having a great impact in Myanmar society, and is expected to increase in the lead up to the 2020 elections.

In commemoration of World Press Freedom Day, the freedom of expression and literary culture group PEN Myanmar released a Freedom of Expression scorecard, carried out with 17 other media and human rights organizations, which every year assesses the performance of the state in promoting and protecting press freedom in the country. The government received six out of 60 possible points (tripling last year’s score).

The analysis concluded that authorities were not doing enough to reform the legal framework and the government had engaged in practices that threatened recent progress.