Design Thinking: Outside the Box for Out-Of-School Children

Design Thinking: Outside the Box for Out-Of-School Children

Initiatives aimed at ensuring that out-of-school children are able to exercise their right to education are plentiful and yet too often many fail to address their actual needs.

What is the missing component in these efforts? The answer may be empathy.

The lives of those designing the programmes and projects are often worlds apart from the out-of-school children they are trying to help – groups which include: impoverished girls and ethnic minorities, survivors of natural disaster and conflict, children in rural areas and those with disabilities. These initiatives, as well intended as they might be, might not accurately reflect the reality of these children.

“We talk a lot about children, but without careful observation,” said Mr Samphors Vorn, country director of Aide et Action Cambodia. “Decisions that we think are best for them are often made based on our distant experiences, not theirs.”

Officials overseeing policies and programmes for disadvantaged children from the Ministries of Education of Cambodia, China, Lao PDR, Malaysia, Mongolia, Myanmar, the Philippines, Thailand and Viet Nam gathered with NGOs to learn about the design thinking process and explore ways to more effectively plan to reach out-of-school children.

“Design thinking” is a concept borrowed from the architectural world that encourages people to think like designers. Tim Brown, president and CEO of IDEO, a leader in the design thinking movement, defined it as “a human-centred approach to innovation that draws from the designer’s toolkit to integrate the needs of people, the possibilities of technology, and the requirements for business success.”

The approach has found success in the education field as well.

Taghyeer, for example, is a Jordan-based organization that began as a small community initiative promoting reading that found early success expanding into refugee camps. When the Syrian War broke out and millions of refugees flooded out of the country, IDEO worked with Taghyeer to develop, “Open a Book, Spark an Imagination,” a movement that took the group’s early successes and expanded on them to create tools, a service model and a partnership strategy that has resulted in the initiative training 70 reading ambassadors reading to more than 1,000 children in three Jordanian refugee camps every week.

IDEO and Taghyeer’s collaboration followed the broad principles of the design thinking process: immersion, which involves clearly understanding the problem and developing empathy; ideation, brainstorming solutions; and prototyping, rolling out a solution.

Angela Koch from Invitro Innovation, who led the UNESCO Bangkok training, sought to bring this same human-centred approach to the challenge of out-of-school children in Asia-Pacific.

Human-centered approaches are created based on empathy 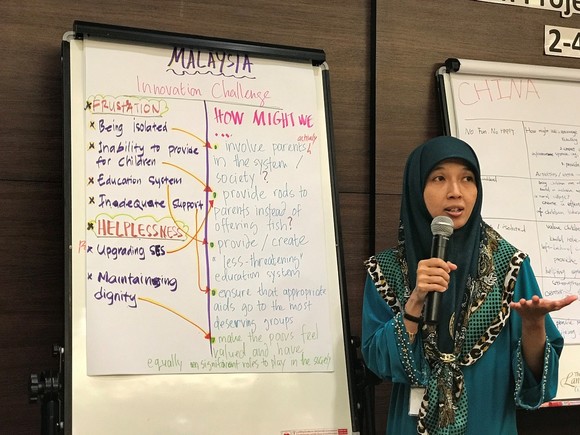 Mrs. Intan Nordin from Malaysia translating her and her team’s perspectives on challenges that Malaysian out-of-school children face into human-perspective statements, “How might we…”.  Photo taken by Hyunjeong Lee

While participants at the training were not, of course, able to immerse themselves in the context of out-of-school children, the workshop allowed them to think deeply and creatively about the challenges they face.

This focus on empathy struck a chord with Mrs Intan Nordin, Assistant Director of the Ministry of Education in Malaysia. She said too often the “human aspect” is overwhelmed by statistics. “But education is about people,” she said. “In that sense, design thinking includes essential ideas that education specialists have to keep in mind all the time.”

Design thinking requires developing well-defined challenges which, in turn, requires an empathetic understanding of the situation. “Now I know why empathy is critical for the rights and inclusion of out-of-school children,” said Mr. Prayut Lakkum, Director of Non-Formal and Informal Centre for Special Target Groups at the Office of the Non-Formal and Informal Education, Thailand. 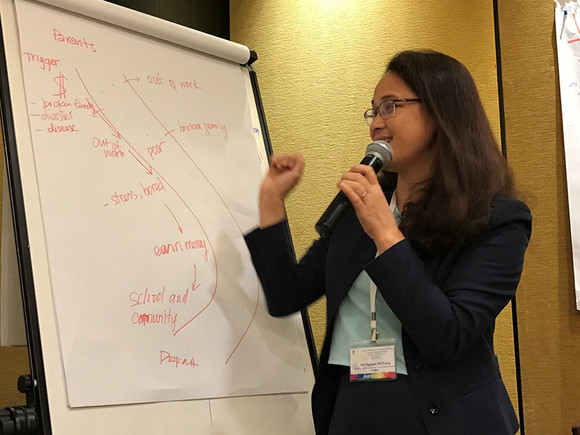 Ms. Nguyen Thi Trang, Researcher from the Vietnam Institute of Education Sciences, putting herself in the shoes of parents of out-of-school child.  Photo taken by Hyunjeong Lee 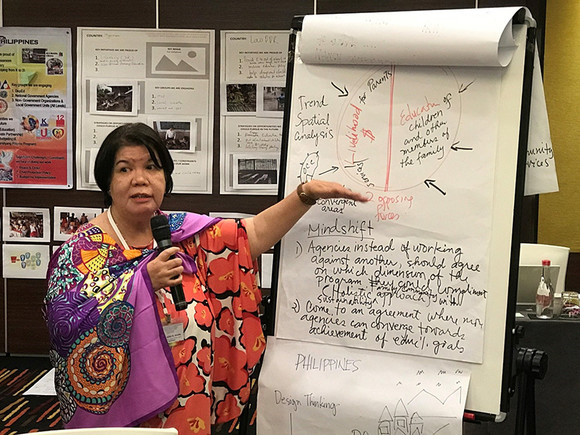 Dr. Juliet Jeruta, Director III of the Department of Education in the Philippines sharing why mind shifting is important for their work for out-of-school children and how it could take place.  Photo taken by Hyunjeong Lee 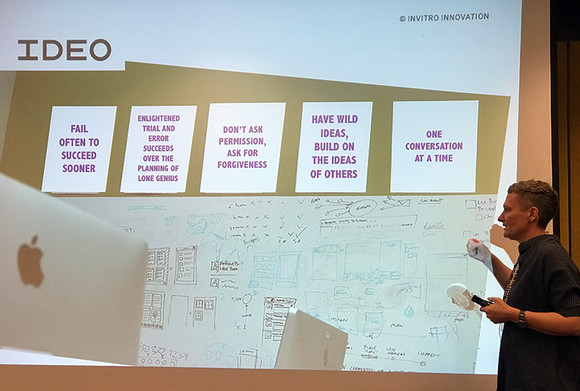 What it takes to understand the issues from a human perspective. Photo by Hyunjeong Lee

“Innovation” has become a buzzword in education and is often associated with high-tech solutions; however, innovations need not be tech-based or expensive. Innovations can begin simply by changing the way people think.

Often this innovation alone can be transformational.

Mrs Nordin said it’s too easy for many in education to follow existing paths. “Thinking out of the box takes too much energy and time.  In addition, as we are more experienced, we prefer patterns or categories within frameworks,” she says. “This training gave me a new viewpoint of how to approach a problem through dialogues with other participants and discussions with Angela.”

Such a major shift in the way challenges in education development are approached will not, of course, occur overnight; however, many of the training participants said that a seed has been planted.

“I thought creativity or innovation were not required for our job and that design was for someone in art or engineering, but it is not true,” said Ms Munkhdelger Urnaa, National Coordinator of UNESCO ASPnet in Mongolia. “[My team] still hasn’t come up with ideas for how to make the most of this learning, but for me, it’s progress to start believing that maybe it’s possible.”

The concept of design thinking described by participants.  These visual concepts highlight that design thinking is a process that combines empathy and the ability to listen and collaborate.  Photos taken by Haruna Omura

Thanks to Haruna Omura, an intern at UNESCO, for her assistance with the interview process.

Photos from the training are available here.