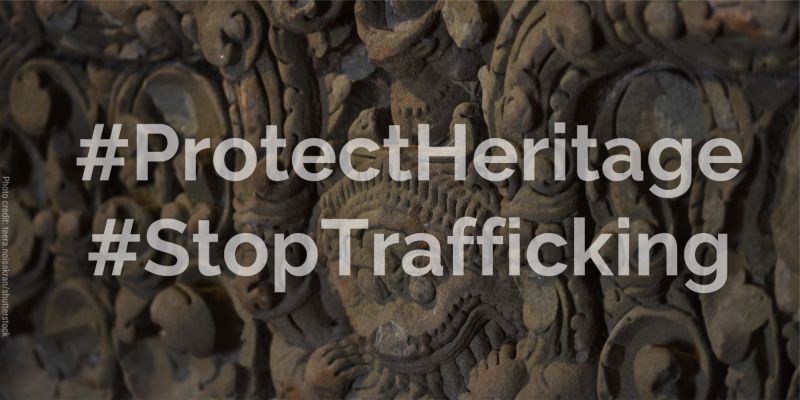 The Nepalese conservationist Rabindra Puri, directing his own construction of a new Museum of Stolen Art in eastern Kathmandu, speaks passionately about how he will feature replicas of stolen Nepalese antiquities, the originals having long ago been shipped overseas and since displayed in tourist attractions, art museums, or private residences, like hunting trophies.

Mr Puri reflects on what he expects visitors to make of his new institution, commenting, 'Any Nepali going in [this museum], their hearts must bleed, and their blood must boil.'

The scene is only one among many disturbing realities plaguing the world's illicit trafficking in cultural objects as documented by the recent Channel News Asia series, Looted, first aired to the public in mid-October. The documentary recounts how a growing movement of activists, archaeologists, and social media sleuths are taking it upon themselves to track down their nations' irreplaceable treasures from the world's major -- and mostly Western -- art museums and auction houses.

Looted showcases the various mindsets that people from opposing sides of the subject tend to harbour, and sometimes openly defend, like grand political, cultural, and ethical positions. As a particularly memorable example, in Looted's first episode, 'Bringing Back the Gods', viewers are witness to an interview in London with auctioneer Alastair Gibson, of Alastair Gibson Auctions, who recounts how the Chinese government recently implored him to withdraw a silver hunting flask of the late Qing Dynasty from an upcoming auction.

The treasure was once the property of the Chinese emperor, that is, before it was stolen from the Summer Palace by British troops during the Second Opium War. In deference to the Chinese government, Mr Gibson ultimately relented, but he comments ruefully:

We are sympathetic to [the Chinese people's] loss. However, if all the Chinese art is solely concentrated in China, does it actually promote Chinese art to a worldwide audience? So, I think it's probably better that [Chinese art is] scattered in various museums around the world, and [thereby] adds to the world's understanding of Chinese art and culture.

On a related front only weeks ago, HBO's talk-show Last Week Tonight with John Oliver, questioned the acquisition histories of several esteemed museums around the world which, to this day, continue to hold or openly exhibit stolen objects from Asia and Africa, as well as other former imperial colonies.

After Oliver summarises the topic in a cheeky monologue, the 'Museums' episode wraps up with a sketch by comedian Kumail Nanjiani, who, flipping the situation, describes a fictitious 'Payback Museum' where, he muses, prized heritage objects of the West might be recklessly displayed and wrongly labelled.

While the public may be scandalised by the notion that shadow markets have served to stock the world's prestigious museums with looted heritage objects for centuries, very few observers have yet to suggest the need for increased or more effective preventive measures. But the fact remains: there is still an immense amount of cultural heritage objects from these countries being taken unlawfully and making its way quietly to global art markets.

Still, as INTERPOL reported less than a year ago, Asian countries are plagued by more illicit excavations than any other region of the world.

Perhaps, then, the question everyone should be asking is not what objects are next in line to come back to us -- despite the tremendous importance of ongoing restitution efforts -- but how can we better prevent such thefts from transpiring in the first place?

There are many ways to do so, and they do not need to be handled unilaterally, or by a single agency. This must be a collective effort not only involving different agencies and ministries, but all related stakeholders and the public. First off, as Nelson Mandela famously stated: 'Education is the most powerful weapon you can use to change the world.'

Therefore, the region's youth must be better empowered to tackle the issue, through development by school systems and education materials, media campaigns, and related products aimed at awareness raising, as well as sensitising tourists of all ages to recognising the illicit trade of antiquities. 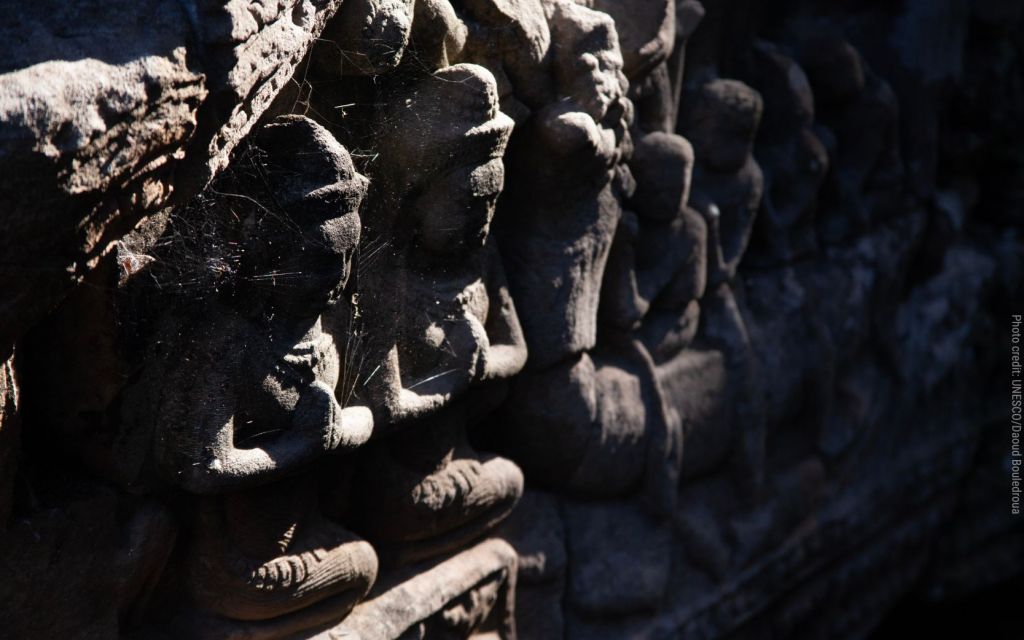 On the national level, governments need to step up their efforts at policing and monitoring heritage sites for potential trouble. Cambodia has, for instance, made considerable efforts to protect its Angkor World Heritage Site against theft and looting.

It was through this important and sustained effort that Cambodia became ready to introduce a major institutional reform. In 1994, acting with UNESCO, Cambodia launched a Special Police Corps for the Protection of Cultural Heritage, which holds the responsibility for inventorying cultural heritage objects and monitoring activities at antiquity retail venues, along with other preventive initiatives and partnerships.

To date, the Special Police Corps have succeeded in retrieving thousands of objects stolen from Angkor over the past three decades.

But national governments can hardly tackle the problem without civic involvement. All potential eyes and ears must be enlisted in the battle against the theft of a people's cultural property.

Even in the most remote areas of a country, such as in Thailand, monks and local peoples should be empowered to assume the role of 'frontline guardians' of heritage properties within their historic temples and communities.

Digital tools and dedicated phone Apps may be developed, such as those already being employed to fight the illicit trade in endangered species.

At the international level, countries should be encouraged to ratify international treaties that have been forged to prevent illicit trafficking of cultural property, the latter namely the 1970 UNESCO Convention on the Means of Prohibiting and Preventing the Illicit Import, Export, and Transfer of Ownership of Cultural Property, and the 1995 UNIDROIT Convention on Stolen or Illegally Exported Cultural Objects.

The reason for forging such conventions is simple: they help assist in the aligning of objectives and the rationale of national laws in different countries, thus providing a middle ground that will allow for more effective negotiations on matters that go beyond national territories.

Little does the South-East Asia public realise, at present, that the region has the world's lowest ratification rate of these two conventions, with only Cambodia, Lao PDR and Myanmar being state parties to both the 1970 and 1995 Conventions, and Vietnam to the 1970 Convention.

Yet for over half a century, countries all around the world have implemented the 1970 Convention, which currently boasts 143 members that have ratified the treaty and in complementary ways improved their national legislation. Countries have also established specialised police forces, created national inventories, and put into place additional preventive measures to protect their cultural heritage for current and future generations.

It is indeed only a matter of time until the 1970 Convention becomes universal. Countries that have not yet joined the different conventions and implemented their effective provisions should be aware that in this era of social media aptness, public opinion is increasingly important.

This article is slightly adapted from the original published by the Bangkok Post on 14 November 2022 at https://www.bangkokpost.com/opinion/opinion/2436937/cultural-looting-still-a-persistent-crisis-in-se-asia

Daoud Bouledroua works within the Secretariat of the UNESCO 1970 Convention on the Fight against the Illicit Trafficking of Cultural Property. Prior to that he worked for UNHCR in Lebanon, and HRW and the German GIZ in Tunisia. He holds a double Master’s degree in International Affairs (with a specialization in Human Rights and Humanitarian Action) with SciencesPo Paris and the Freie Universität Berlin. He has produced several short documentary films on intangible cultural heritage in the Maghreb and architecture.

Dr Nisit Intamano is Asst. Prof. and Director of the School of Law of Sripatum University, Bangkok. He has more than 20 years of experience as a lawyer and legal advisor. He has also served as an Associate Judge at the Central Intellectual Property and International Trade Court of Thailand. His expertise includes alternate dispute resolution, dispute settlement by arbitration, intellectual property law, international trade and investment law, and contracts and transactional law.

Montakarn Suvanatap Kittipaisalsilp has an education background in linguistics, museology and cultural project development. At UNESCO Bangkok she is responsible for implementing national and regional capacity-building projects on intangible heritage safeguarding, sustainable heritage management, professionalization of heritage-related careers and prevention of illicit trafficking of cultural properties. Her interest has been on interdisciplinary and participatory approaches to heritage safeguarding and sustainable tourism, with focus on ensuring ethics in working alongside local communities and indigenous peoples.