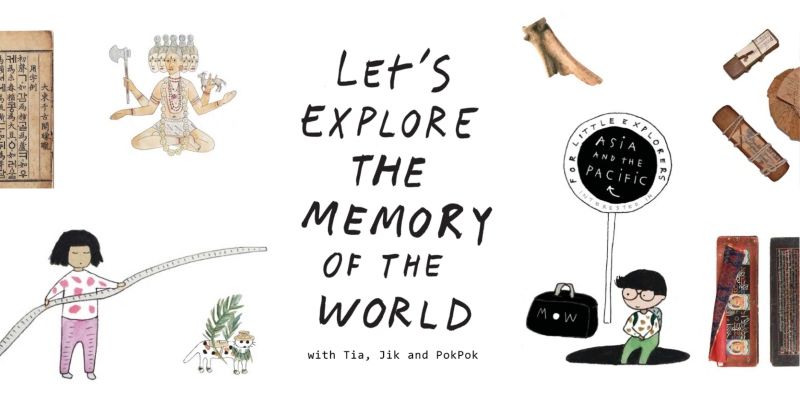 In a global and digital context where disinformation circulates swiftly, and where information overload of even legitimate news can be challenging, the lack of literacy among youth in analyzing information can lead to social polarization and conflict. Now more than ever, there is a need for educational resources that can help lead educators and learners towards the right sources of information, some of which can be found within the local community in libraries, museums, a place of worship, and even in one’s own home.

The launch attracted 97 participants from 31 countries, and featured speakers from teaching, archive management, and collection custodian backgrounds, who offered their perspectives on how the book can be used as a uniquely effective educational resource.

During opening remarks, Kwibae Kim, Chair of Memory of the World Committee for Asia and the Pacific (MOWCAP), stated that the book celebrates the diversity of world cultures and represents how documentary heritage serves to record accumulated experiences in a way to better understand environmental challenges or the social resolution of past conflicts for the benefit of future generations. UNESCO Bangkok Director Shigeru Aoyagi highlighted the potential of documentary heritage as an educational resource in creating more socially connected and ethically responsible global citizens, their values ultimately relating to UNESCO’s own mission, including gender equality and universal human rights.

The book editor and coordinator, Misako Ito, Advisor for Communication and Information at UNESCO Bangkok, introduced the story of discovery with the three main characters and presented the three sections of the book, namely a learning section about MOW, a section on discovering documentary heritage collections from Asia and the Pacific, and a last one on creative exercises that assist young learners in recording and documenting their own memories. Author and illustrator Sali Sasaki shared with participants that she wanted the book ‘to be an exploration of cultures, places and peoples’, and to ‘raise curiosity about the world’ among not only young readers, but also across generations.

In the discussion that followed, Dianne Macaskill, Founding Chair of Memory of the World New Zealand, invited panelists to share their impressions of the book. Roslyn Russel, Chair of Memory of the World Committee Australia, replied that she was impressed with the book's colourful and compelling graphic design, while Sainbileg Byambadorj, of the National Library of Mongolia, pointed out the book’s potential for stimulating interest in its subject among children. Notably, Byambadorj has also assisted with the translation of the book into Mongolian.

Jocelyn T. Guadelupe, Assistant Professor in Music Education, University of the Philippines, shared how the Jose Maceda Collection of musical recordings at the university has been incorporated in local school curricula, and is currently being repatriated in an attempt to revive the nearly lost indigenous tradition of sounding the bamboo drum in times of imminent disaster.

Martin Porter, Professor at the University of Saint Etienne, remarked that the book raises the importance of access to and awareness of documentary heritage. He also shared his experience teaching history in France and the United Kingdom using various creative mediums, such as art, mime, theatre, and even a murder mystery game, to discuss universal human values and raise awareness among young learners of cultural challenges faced throughout history.

Dianne Macaskill ended the lively discussion by mentioning how the book ‘can contribute towards a wide range of learning’, a point supported by Jocelyn T. Guadalupe’s teacher testimonials from the Philippines on the book’s potential to complement the teaching of various subjects, among them journalism, arts, social studies, and literacy, and indigenous communities. Macaskill also commended the book for its efforts to represent each country, so that readers can explore not only their own heritage but that of others, thus encouraging them to become future proponents of documentary heritage preservation. Roslyn joined in the conversation by referring to the book as ‘a tremendous innovation’ in providing a point of access to documentary heritage for children, including her grand daughter. Vice chairperson of MOWCAP Mitsuru Haga, of Tohoku University, confirmed that the sharing of the book in this manner among generations is ‘an act of transmission that represents what the book is all about’.

In closing remarks, Fackson Banda, from the UNESCO Memory of the World Secretariat, shared that while the work related to MOW registers is important, what has been lacking was the effective promoting of these registers among wider audiences, including the educational sector. ‘Understanding the past’, said Banda, holds the key to ‘facing the future with greater confidence’. Banda connected the book with the development of the UNESCO E-Course on how to incorporate Memory of the World in classrooms for teachers, which is based on materials provided by various experts, calling it ‘another gamechanger’ in reaching school audiences and meeting the objectives of the MOW programme.

To visit the e-course for teaching Memory of the World in the classroom: https://www.unesco.org/mowcourse/en/

Safeguarding Documentary Heritage
Together for Peace