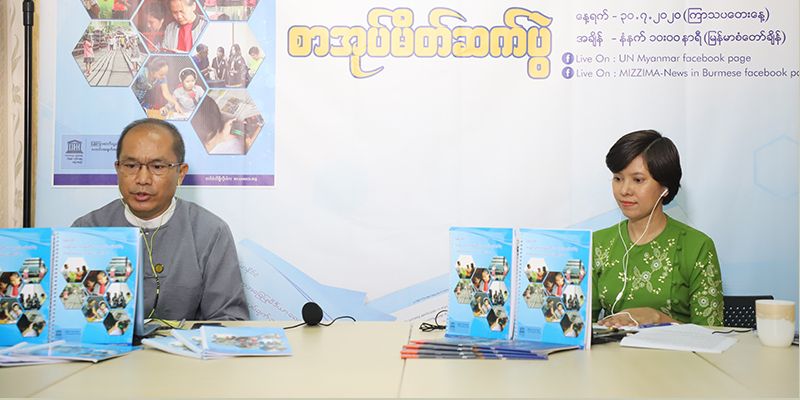 Community radio is a vital tool “to give voice to the voiceless”. In Myanmar, however, Khayae FM, located in Atwin They Phyu Village in Yangon’s HtanTabin Township, is the only licensed community radio station currently operating. There are five community radio projects in Chin and Mon States and in Delta areas, but their operations are limited to content production and online distribution. These projects are hoping to eventually receive their licenses and operate as full-fledged radio stations.

On 30 July 2020, UNESCO Myanmar launched the “Situation Analysis of Community Media Sustainability in Myanmar”. The study examines laws related to setting up community radio stations and the challenges and opportunities in the operation of local media channels.

With support from the Multi-Donor Programme on Freedom of Expression and Safety of Journalists, the UNESCO Myanmar Office commissioned AMARC Asia-Pacific to conduct a situation analysis and to provide concrete recommendations on how to create a policy environment conducive to the growth of community radio in Myanmar. AMARC Asia-Pacific is an international organization that amplifies the voices of marginalized individuals and sectors through community media and new ICTs.

During the launch, Head of UNESCO Myanmar Office Ms. Min Jeong Kim reiterated UNESCO’S commitment to work with partners in promoting the interests of community media. She emphasized that the essence of community radio is to give a voice to the voiceless, in particular underserved and marginalized individuals and groups.

The study’s recommendations fall under two categories, according to AMARC Asia-Pacific Regional Director Mr. Suman Basnet. The first category refers to policy options to ensure the sustainability of community radios in the country. The second involves mobilizing multi-stakeholder and multi-sectoral support for community radio, including the creation of a Community Media Support Network. The situation analysis recognizes that strengthening community radio will contribute to a more vibrant and free media climate, which is essential to a strong democracy.

Acting Deputy Director-General Mr. Zeyar of Myanmar Radio Television (MRTV) told virtual audiences at the launch that community media was a priority of the Ministry of Information. He cited ongoing initiatives by MRTV Radio to broadcast in 17 ethnic languages and MRTV Television in 11 languages. Meanwhile, Mr. Ye Naing Soe of the Myanmar Broadcasters Association expressed his group’s support for the growth of community radio in the country.

Community members of Htan Tabin Township remain engaged in and excited about their own radio station, two years since its initial broadcast in February 2018, because “there is nothing much to hear about their own interests from other media outlets”, said Khayae FM station manager Ms. Thu Thu Hlaing said.

This sentiment reflects UNESCO’s advocacy of community radio stations worldwide. “UNESCO is committed to supporting community radio until there are no longer any muted voices – across cultures, beliefs, gender and economic status,” Ms. Kim said.

The report can be downloaded in English and Myanmar languages.