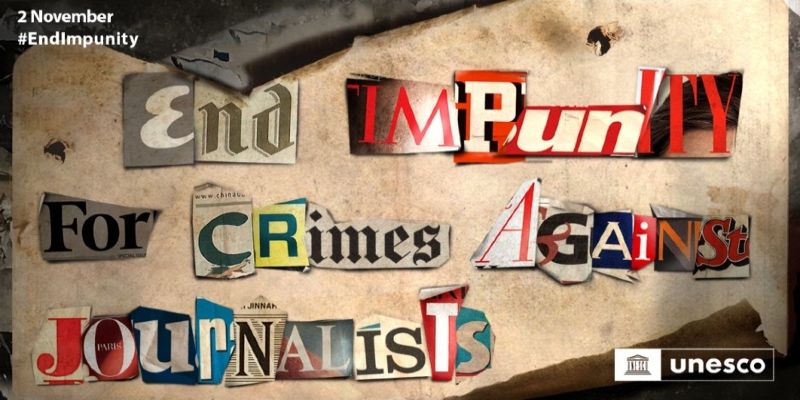 On the occasion of International Day to End Impunity for Crimes against Journalists, 2 November 2021

Ending impunity for crimes against journalists is one of the most pressing issues for guaranteeing freedom of expression and access to information for all peoples. Between 2006 and 2020, over 1,200 journalists were killed around the world, with close to 9 out of 10 cases of these killings remaining judicially unresolved, according to the UNESCO Observatory of Killed Journalists. This cycle of violence against journalists is often an indicator of the weakening of the rule of law and a compromised judicial system.

While killings clearly constitute the most extreme dimension of media censorship, journalists are also commonly subjected to numerous other alarming threats, among them kidnapping, torture, and various kinds of physical attack and related harassment, no less other tactics of intimidation being increasingly perpetuated in the digital sphere. Threats of violence and attack against journalists create a climate of fear for media professionals, impeding the free circulation of information, opinions and ideas. In many cases, when violence or intimidation is not properly investigated, they escalate to even more severe acts of aggression, if not outright murder.

In Thailand, at atmosphere of prolonged political tension has been exacerbated by the recent COVID-19 pandemic, which has resulted in nationwide mass social unrest. Together with the widening of income and wealth disparities, the socio-economic impacts of COVID-19 have given rise to near-daily protests in both Bangkok and provincial areas.

Thai journalists thus find themselves trying to function in an increasingly hostile work environment, and increasingly falling victim to physical, verbal and online attack. Over recent years, more journalists have been reported physically injured while performing their work. At the same time, social media influencers and bloggers living in exile have been victims of forced disappearance. These conditions seriously hamper the ability of all journalists to report news and information to the public.

To commemorate the International Day to End Impunity for Crimes against Journalists, UNESCO will support the launch of a special report produced by the independent online newspaper Prachatai on the challenges of Thai journalists in recent years, and an online public discussion on regional trends related to the safety of journalists and the role of judiciary operators in Thailand in bettering the investigation and prosecution of crimes and threats of violence against journalists.

Event
02 Nov 2021
Freedom of Expression
Together for Peace