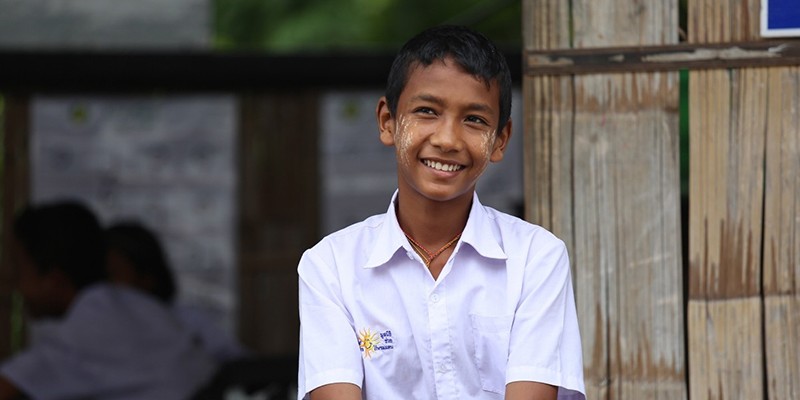 Two years ago, Chit Ko’s migrant parents decided that at age 11, his schooling was over and it was time for him to work and support the family. Had they not changed their minds, Chit Ko would likely be doing just that – working hard in a field to earn what he could and never to obtain even basic education.

Instead, Chit Ko, now 13, stayed in school and not only is he at the top of his class, he has finished at the top of his entire state’s exams. Recently, Chit Ko received an award to acknowledge his top score on the Myanmar Non-Formal Primary Education (NFPE) examination in Kayin State, Myanmar.

It’s a “miracle”, say those who’ve supported Chit Ko and witnessed his story over the past two years. And, along with the passion and dedication of Chit Ko himself, it is one that came about as a result of a collaborative effort that involved a dedicated headmaster and several partners in promoting the use of ICT to overcome barriers learners like Chit Ko face to education.

Chit Ko migrated with his family from Myanmar to Thailand at an early age. His parents became mired in poverty as they got older, they wanted Chit Ko to drop out of school to work and contribute to the household.

Then Seik Khamar Chan, headmaster of Sauch Kha Hong Sar learning centre, entered Chit Ko’s home and changed his life. She had been visiting families in his Mae Sot community to encourage villagers to send their children to school. Like many migrant families in similar situations, Chit Ko’s family asked, “How can we send our children to school if we, ourselves, are still struggling to live?”

“If Chit Ko continues to work like this, his life will be tough like yours,” Seik Khamar Chan told them. “I will help cover all of his school expenses and I can guarantee that he will be good. Please trust me.”

His parents put their trust in the headmaster and Chit Ko ran with the opportunity. Since that day, he has been studying hard and has shown a palpable passion for learning and reading. He spends much of his time reading books on a tablet filled with Myanmar and Thai learning resources and his performance in class has soared. “I have all of my textbooks and I can read many other books that I like from the tablet,” says Chit Ko.

The school's headmaster says the introduction of ICT devices has transformed classes at Sauch Kha Hong Sar, making them more engaging and fun for the students.
“We used to have only a white board and students didn’t have so much fun in learning. Now that we have the tablets and TV, the kids want to come to school. They are very happy when teachers use the tablets and they can watch documentaries or cartoons after class on TV,” she says. “When we use ICT devices, the students get so excited. They have so many questions about the lessons. They even read ahead in textbooks before classes by themselves.”

Chit Ko’s top score in the NFPE examination in Kayin State for the academic year 2016 is testament to the success of the approach. Following his success, another five migrant students from Sauch Kha Hong Sar and New Road learning centres finished with the top scores out of 1,085 NFPE learners who sat for examinations for the NFPE programme in Myanmar and Thailand. They also have been using the ICT devices.

As for Chit Ko, he’s looking to pay forward the benefits he’s received, mentoring younger students on how to use the tablets and encouraging them to read, and also continuing his own studies a Non-Formal Middle School Education (NFME) programme. He has his parents’ full support.

“I’m very proud of my son,” says his father, looking at a photo of his boy when he received the award for his high NPFE exam score.

Since 2014, UNESCO Bangkok has been implementing the “Mobile Literacy for Out-of-School Children in Thailand” initiative with the support of Microsoft, True Corporation, CP Group, Help without Frontiers Foundation and Ministry of Education Thailand to provide quality education for marginalized children along the Thai-Myanmar border through mobile learning and ICT devices. To date, over 5,500 children, including Chit Ko, have enhanced their basic literacy and numeracy skills by more than 5O percent through the project.

Learn more about how you or your organization can partner with UNESCO to expand education to marginalized learners throughout the region: Ichiro Miyazawa, Programme Specialist, UNESCO Bangkok, i.miyazawa (at) unesco.org ;

Watch: From out of school to ‘miracle’ student: ICT breaks barriers for migrant learner