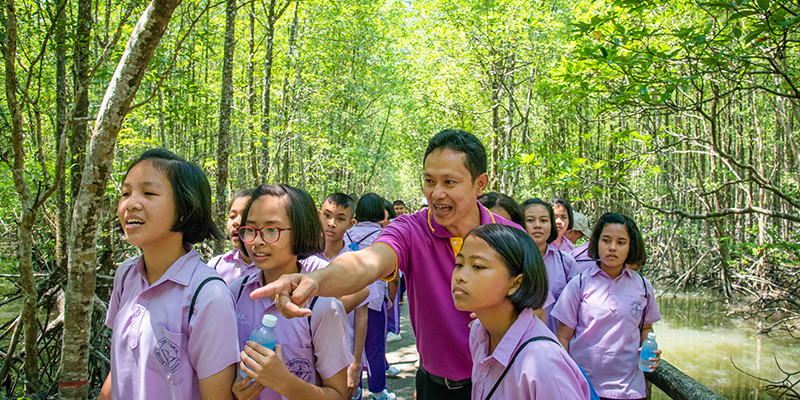 In line with this essential mission, on the occasion of the International Day for Biological Diversity on 22 May, UNESCO and its partners are opening the 11th Southeast Asian Biosphere Reserves Network Meeting to be held in Chiang Mai, Thailand. With 147 located in the Asia-Pacific region, and four in Thailand, Biosphere Reserves are living laboratories for sustainable development – special places that promote an integrated approach towards sustainable development based on local community efforts and sound science.

UNESCO’s regional efforts are part of an organization-wide recognition of the urgency marked by the International Day for Biological Diversity. ‘Biodiversity is a common good, an invaluable legacy formed over the course of millions of years, and capital to transmit to future generations. In its definition, it includes the exceptional variety of the forms of life on Earth, as well as the natural environments where these forms developed – the ecosystems. Biodiversity is central to our own existence, offering all nature’s resources to our development,’ UNESCO Director-General Audrey Azoulay said in a statement. ‘Biodiversity, however, is not inexhaustible. Human interventions – extensive exploitation of resources, unsustainable patterns of consumption, industrial pollution causing climate change – are resulting in irreparable damage to biodiversity.’

Based on that fundamental reality, the Programme on Man and the Biosphere (MAB) launched in 1971 is an intergovernmental scientific programme aiming to set a scientific basis for the improvement of the relationship between people and their environment globally. Central to the programme’s mission is the World Network of Biosphere Reserves (WNBR) comprising 669 Biosphere Reserves distributed in 120 countries around the world.

The Chiang Mai meeting, titled ‘Biosphere Reserves: Exploring Local Solutions for Global Sustainability’, will include an expected 60 participants from the Asia-Pacific region and a special session of the Asia-Pacific Biosphere Reserve Network. The event will also feature a one-day field visit to the adjacent Mae Sa Kog Ma Biosphere Reserve, including stops at the Queen Sirikit Botanic Garden, Ban Pong Krai, Doi Suthep National Park and Doi Pui Mong Village, which will allow participants to observe and provide advice on the implementation of the biosphere reserve concept in practice.

The objectives of the meeting include:

Biosphere Reserve management plans aim at sustainable human living in reconciliation with nature conservation. As such, they contribute greatly to the conservation of terrestrial, coastal and marine ecosystems, including mountains, forests, mangroves, lakes, rivers and coral reefs, and their associated flora and vegetation, and vertebrate and invertebrate endangered wildlife.

The World Network of Biosphere Reserves will make a targeted contribution to the achievement of the Agenda 2030 and the Sustainable Development Goals.  Based on the recognition that national plans should be founded in national and regional realities and imperatives, countries across Asia and the Pacific are now developing their own strategies.

UNESCO has a broad mandate to support these strategies and simultaneously address issues of biodiversity and cultural diversity, represented in its support of the MAB and partnership with the Intergovernmental Science-Policy Platform on Biodiversity and Ecosystem Services (IPBES), which met last March in Medellin, Colombia. ‘Beyond the urgent need to preserve biodiversity and restore degraded ecosystems, these programmes are helping to change attitudes and develop economic and social practices,’ Ms Azoulay said. ‘This falls within the 2030 Agenda for Sustainable Development, in particular Sustainable Development Goal (SDG) 15, dedicated to the quality of life on Earth, and requires the sharing of values such as cooperation, respect for diversity, and intergenerational solidarity, values acquired and cultivated through education for sustainable development (ESD).’

The Chiang Mai meetings are being hosted by the Thailand National MAB Committee through the Thailand Department of National Parks, Wildlife and Plant Conservation, facilitated by the SeaBRnet Secretariat at UNESCO Office Jakarta and UNESCO Office Bangkok, and supported by Japan Funds-in-Trust (JFIT), the Government of Thailand and UNESCO.