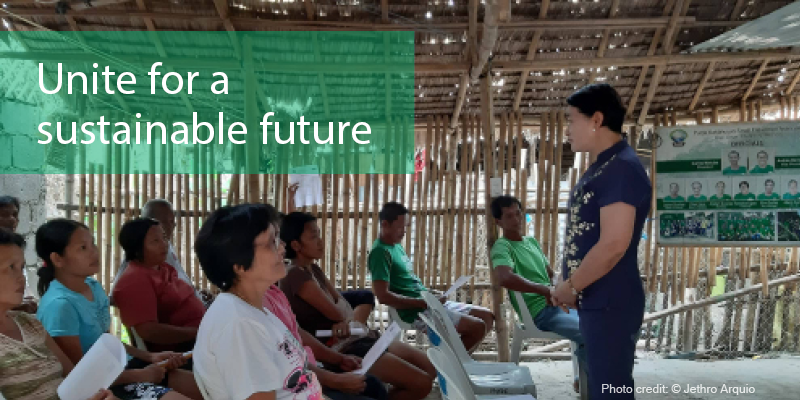 When the fisherfolk community of Cadiz City in Negros Occidental was first approached by the Philippine Normal University Visayas (PNU Visayas), they resisted. The university wanted to provide aid, but not in the way most were used to: it was not food, nor money – it was education.

“If you’re not bringing something tangible, they will not listen to you,” said Anna Liza G Santillana, Director of the Centre for Environment and Green Technology Education at PNU Visayas. “This is how it is in the Philippines.”

However, Dr Santillana saw how the livelihoods of the fisherfolk could be transformed by changing practices of illegal fishing and rehabilitating mangroves in their area to mitigate disaster risks. Mangroves act as natural buffers against typhoons and storm surges that often plague the Cadiz City coastline, making it beneficial for communities to learn to plant and sustain them. “I was happy to have the fisherfolk leading the rehabilitation of the mangrove area,” Dr Santillana said.

Although the initial response was negative, she pushed forward in the attempt to gain the community’s trust, visiting the community, sitting on the roadside having a coffee and chatting, and developing a rapport. It took several months to earn their trust.

PNU Visayas then invited staff from the Department of Agriculture, as well as local government units and organizations, to give lectures in the community to help the fisherfolk unlearn illegal fishing practices, relearn how to fish more sustainably, and to rehabilitate mangroves in their area that had been slow to replenish after Typhoon Haiyan.

A small community learning centre was established for meetings and learning activities. From an initial group of four fisherfolk, the local learning project has expanded to include 45 members of the community.

The fisherfolk community in Cadiz City is a testament to the power of education in transforming societies for a more sustainable future. With a commitment to this idea, Dr Santillana shared her experiences as one of the participants and facilitators at a capacity-building workshop on community-based Education for Sustainable Development (ESD) held in Cebu in April.

Organized by the College of Education at University of San Jose – Recoletos, the workshop involved many educational institutions in Visayas as both co-organizers, facilitators and participants. These institutions, including Cebu Normal University, Cebu Technological University, PNU Visayas and schools under the Department of Education, are working with communities to utilize education to transform the lives of people in the communities.

The Cebu workshop was organized as part of a pilot process under the project of UNESCO Asia-Pacific Regional Bureau of Education entitled “Promoting Community-based ESD”. Supported by the Government of Japan, this project is working with non-formal and community educators to promote ESD in the local context for sustainability and wellbeing.

Three learning modules have been developed in expert meetings, which are being piloted in five countries across Asia-Pacific – India, Japan, Lao PDR, Mongolia and Philippines. The modules are designed to guide non-formal and community educators in the processes of reflection, sharing and taking action.

The “Reflect” module helps learners, who are also trainers in this model, to use a self-reflective approach in understanding the realities of their community and concepts of ESD in their local context. “Share” then enhances the capacities of trainers to communicate with other community educators their reflections and understandings of ESD. The third module “Act” helps trainers design, plan, implement and evaluate their community-based ESD actions.

Also as part of the pilot process, the Non-formal Education Development Centre (NFEDC) in Lao PDR is working with communities in the villages of Ban Hom and Ban Simmano in Vientiane prefecture.  “The Lao team is the first to implement something like this,” said Soukanya Manivanh, Deputy Head of the Section of Literacy and Equivalency Education at NFEDC. “We’re implementing it and along the way, learning how to do it at the same time.”

In Ban Hom and Ban Simmano, the main source of income is agriculture. As the excessive use of pesticides has damaged residents’ health, the community needed to change, but did not know how. The NFEDC stepped in to help.

At a gathering of village heads, community members and educators, a needs assessment was conducted. Participants learned to reflect on and analyze what was needed in the communities, which concluded less pesticide use as well as proper waste management. Then, workshops were organized to guide participants through the Reflect-Share-Act process, after which they developed action plans for the communities. “We let them do it by themselves,” Mr Soukanya said.

He added that one of the main challenges for such initiatives in Lao PDR was the lack of funding. “There is a limitation in terms of budget,” he said. “In the government, many people may understand the need for sustainable development, but still don’t know how to do it.” Because of this, the government seldom prioritizes the allocation of funds for sustainable development projects.

The cases in the Philippines and Lao PDR recognize the difficulties in approaching communities to integrate ESD and promote sustainable development, but also hope to inspire others to become more involved in such efforts. For example, Dr Santillana is currently collecting the indigenous knowledge and stories of fisherfolk communities in the local language to be used as teaching and learning materials in local schools. “We won’t only let them know about the mangroves,” she said, “but we want to really inculcate the values.”

Mr Soukanya is also positive for the future in terms of changing mindsets towards sustainability. Since sustainable development is a new concept, not only for communities, but also for Lao people in general, awareness must be raised among all. He stresses that it will not happen overnight. “We need to take time,” he said. “The main thing is developing the understanding of the community.”

The experiences of these communities have important lessons for us all. Telling a community what to do is not as effective as listening to them, developing a rapport, and addressing their real needs. Engaging communities in a transformative learning process is particularly valuable in that all sides can learn from one another. Through education and learning, together we can continue to move forward for the sustainable future of our world.

By Chariya Chiumkanokchai, Programme Assistant for Education for Sustainable Development and Global Citizenship at UNESCO Bangkok