The Big Conversation: Handbook to Address Violence against Women in and through the Media | UNESCO Bangkok Skip to main content 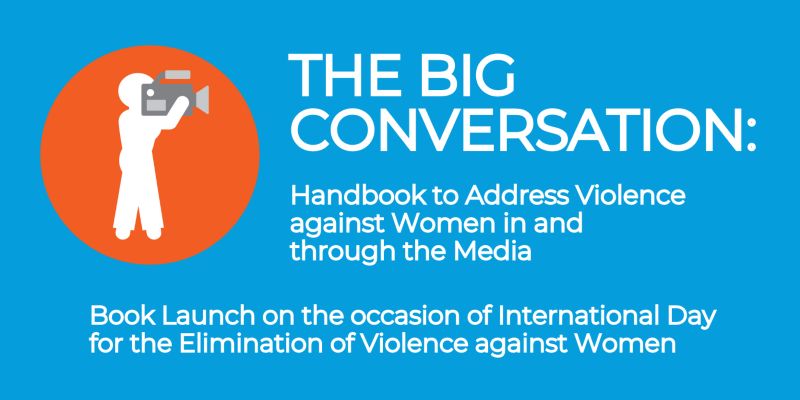 On the occasion of International Day for the Elimination of Violence against Women, 25 November 2021

Over roughly the past two decades, Thailand has made considerable progress in advancing measures to combat violence against women through nationwide response mechanisms. These include the issuance of a specific law on domestic violence; the criminalization of marital rape and the protection of people of all genders against sexual violence; and the establishment of health and social service facilities that respond to the problem of violence nationwide.

Despite such important gains made, however, Thailand’s National Human Rights Commission reports that over 1,800 persons fell victim of domestic violence in 2020, and of those abused, about 84 per cent were women[1]. While the number of cases compiled by organizations in Thailand during the COVID-19 lockdown did not reveal an increase in the reporting of domestic violence, Internet searches reflecting the activity of users seeking help, such as in the search term ‘domestic violence help’, has increased in Thailand by 29% according to the UN report, COVID-19 and Violence against Women: The Evidence behind the Talk, released in March 2021.[2] Online platforms saw more instances of misogyny, chief among them trolling, using images without consent, and blatant sexual harassment. In addition, people have been documented as taking to Twitter to blame or otherwise malign victims in cases of sexual violence. Percentage figures tracking pre-pandemic misogynistic tweets with more recent numbers over the period October 2019 to October 2000 has been documented as an increase of 22,384 per cent.

There is little available research on the role media coverage may play in the incidence of violence against women in the region. However, several studies undertaken on gender and media in the region have raised concerns about gender stereotypes being advanced in the media in societies where violence against women persists as a serious social reality. The National Press Council of Thailand (NPCT) issued in 2018 a code of ethics and practical guidelines for news reports regarding respect of women’s dignity and gender equality[3]. In April 2020 the National Broadcasting and Telecommunications Commission (NBTC) also issued a set of Television Broadcasting Guidelines based on Human Rights and Dignity of Women[4] for broadcasters of news and television programmes.

Regional media tend to report on violence against women and girls in an insensitive way, which ultimately exacerbates the suffering of victims, even turning them into objects of criticism[5]. News reports that invade the privacy or denigrate the dignity of victims of violence are not uncommon. The public also expresses concern over the depiction of sexual violence on screen, as illustrated by the Facebook campaign ‘No More Rape Culture in Thai Soap Opera,[6] reporting on recurring rape scenes in Thai dramas broadcast through mainstream television channels. The impact of such media on gender-based violence deserves further investigation.

Against this backdrop, and to address many of the issues attending the topic, UNESCO and UN Women published The Big Conversation: Handbook to Address Violence against Women in and through the Media (hereafter ‘The Big Conversation’). The handbook provides guidance, tools, and accounts of ‘best practices’ from various countries for working with and within media to help deter violence against women and to proactively combat the perpetuation of violence-supportive social norms.

In partnership with the National Broadcasting and Telecommunications Commission (NBTC), the National Press Council of Thailand (NPCT) and the Ministry of Social Development and Human Security, UNESCO and UN Women will launch the Thai language version of The Big Conversation and engage regulators, media, journalism schools and faculties, and civil society groups to advance actions to prevent violence against women in and through the media. The event will be broadcast online on 25 November 2021 to celebrate the International Day for the Elimination of Violence against Women.

The Thai translation of the publication is generously supported by the Korean Institute for Gender Equality Promotion and Education (KIGEPE).