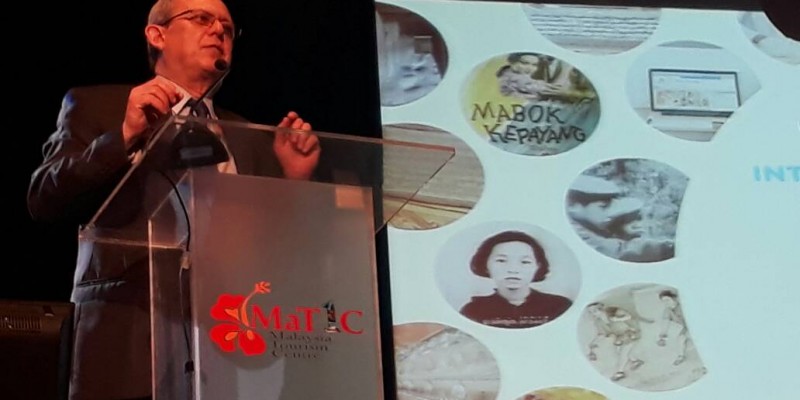 International symposium on Southeast Asia Heritage in Digital Age looks at how UNESCO Recommendation, Memory of the World Programme can benefit region’s archives

KUALA LUMPUR - 9 MAY 2017 -  Failure to preserve documentary heritage in Southeast Asia could result in this rich legacy – and the valuable lessons for humanity it contains – being lost to future generations.

How UNESCO can support ASEAN countries to overcome these obstacles and preserve and promote access to documentary heritage was the focus of an international symposium, which concluded here yesterday.

The symposium, “Preservation and Access: Southeast Asia’s Documentary Heritage in the Digital Age,” brought together more than 300 participants from around the world, including from all ASEAN countries, Timor Leste, as well as China, Japan and the Republic of Korea.

Delegates discussed the region’s unique challenges in preserving and promoting access to documentary heritage and how the implementation of UNESCO’s “Recommendation Concerning the Preservation of, and Access to, Documentary Heritage Including in Digital Form”, and the Memory of the World Programme could address these issues.

In his welcome remarks, Frank La Rue, UNESCO Assistant Director-General for Communication and Information, spoke of the importance of the Memory of the World Programme and the documentary heritage it supports, saying this “knowledge shared between peoples” could develop “the understanding and the dialogue that the world needs for building peace.”

Regardless of its form, he called this heritage, “the legacy that accompanies us and that we're leaving for the next generation, the transfer of this knowledge to all of humanity.”

“[The UNESCO] recommendation is an effort to point out to the whole world how important it is to preserve this material,” he said, noting that this was the first consultation of several that UNESCO will organize on the recommendation’s implementation. “Today in Malaysia, in Southeast Asia, we're opening a new era in the Memory of the World Programme.”

Prof. Shahbaz Khan, Director of UNESCO Jakarta, called the recommendation a "milestone in the history of UNESCO's work toward the preservation of documentary heritage", and also stressed the importance of international cooperation, particularly within ASEAN.

“With wars, social upheaval and severe lack of resources and the boundaries of our countries, it is more important than ever for us to understand what our documentary heritage is,” said Prof. Shahbaz Khan. “We all need to share. There may be some difficult parts of [our shared histories], but we need to know and move forward together.”

Vongthep Arthakaivalvatee, Deputy Secretary-General of ASEAN, for the Socio-Cultural Community, likewise, said that the UNESCO Recommendation was in line with “ASEAN’s discussions on promoting intercultural understanding and a culture of peace.”

“Documentary heritage certainly has a significant role in raising the knowledge of ASEAN citizens of the rich heritage of other ASEAN member states,” he said. “Hopefully in doing so they can understand the shared cultural values that bind us.”

He noted that the symposium and wider work around Memory of the World represent a concrete outcome of the ASEAN-UNESCO Framework for Action, and provide further proof of the strong bond between the two entities.

YBhg. Datuk Rashidi bin Hasbullah, Deputy Secretary General of the Ministry of Tourism and Culture, read remarks on behalf of his Secretary-General H.E. Datuk Hj. Ab. Ghaffar bin A. Tambi, who said the symposium was timely for both Malaysia and the region.

"Given that the recommendation is relatively new and has yet to be applied in this region, the ASEAN + 3 member states and stakeholders will definitely need UNESCO's support and guidance in adopting this new instrument," he said.

To that end, UNESCO will be meeting with national stakeholders and experts in documentary heritage preservation from 9-11 May to draft an action plan for the implementation of UNESCO’s Recommendation in ASEAN countries. The draft is expected to be completed by 11 May.

Presenters listed some of the key challenges facing those working in ASEAN’s memory institutes (archives, museums, libraries), etc, such as climate, a lack of funding and a lack of public awareness as well as the challenges and opportunities of the digital age.

Prof Sarah Kenderdine, Director of the Laboratory for Innovation in Galleries, Archives and Museums (iGlam) at the University of South Wales, for example, gave a dazzling multimedia presentation on how technology can be used to create immersive experiences and bring heritage to life, while Eric Chin, Director of Singapore’s National Archives, discussed how the internet has enabled him to crowd-source transcriptions pertaining to the Straits Settlement Records.

Most presenters noted, however, that along with the opportunities technology brings, there can also be burdensome costs and the challenge of technological obsolescence, both of which need to be navigated with the types of strategies outlined in the Recommendation.

The symposium and consultation are organised by UNESCO, in partnership with the Ministry of Tourism and Culture Malaysia, and in cooperation with the ASEAN Secretariat and is made possible through support from the Government of Malaysia via the Malaysia Funds-in-Trust (MFIT) under the Malaysia-UNESCO Cooperation Programme (MUCP).

The symposium was broadcast live on the UNESCO Asia-Pacific Facebook page (Facebook.com/UNESCOBKK), with live tweeting on #MOWASEAN. Full edited video of the symposium will be shared on UNESCO’s YouTube channels, and all presentation materials will be made available on UNESCO Bangkok’s website.

At the 38th Session of the UNESCO General Conference in Paris in 2015, 195 countries voted unanimously in favour of the introduction of a new UNESCO Recommendation on documentary heritage, including in digital form.

The Recommendation addresses both the technical and strategic issues that arise in the preservation and use of documentary heritage, providing practical, actionable recommendations that can be used by governments, memory institutes (archives, libraries, and museums), the private sector and individuals.

Given that the Recommendation is relatively new, and has yet to be applied in the region, UNESCO is supporting ASEAN+3 Members States and stakeholders in adapting this new instrument to the region’s contexts through this symposium and consultation, the development of the action plan and follow-up efforts going forward.

This will be the first global consultation on the implementation of this important Recommendation. The aim is to develop a UNESCO-ASEAN “action plan” for its implementation in the region in line with the recently signed MoU on cooperation between UNESCO-ASEAN.

heritage
Memory of the World
ASEAN