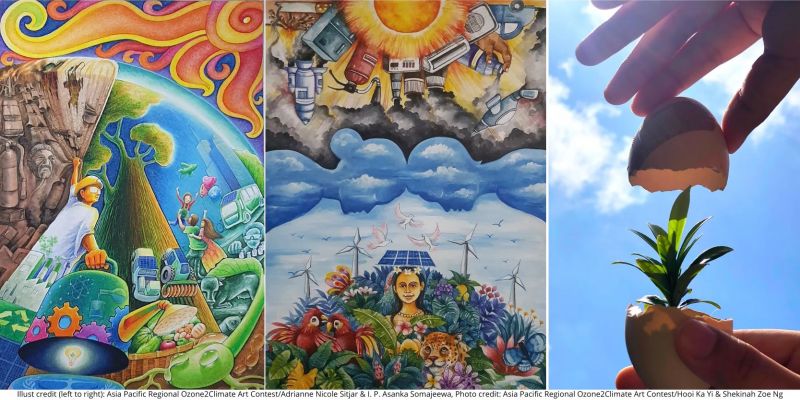 16 September 2022, BANGKOK ‒ On the occasion of World Ozone Day (16 September), which commemorates the Montreal Protocol on Substances that Deplete the Ozone Layer, UNEP and its partners are pleased to announce that 36 artists have won the ‘Asia Pacific Regional Ozone2Climate Art Contest’. The competition, which took place over a one-year period, is designed to increase public awareness about the importance of the treaty for protecting human health and nature and to generate further support for the Protocol’s compliance objectives. The contest was organized as part of UNEP’s mandate as an Implementing Agency of the Protocol’s Multilateral Fund.

Thirty-four countries from Asia and the Pacific participated in the contest, which was launched on 16 September 2021 by the UNEP OzonAction team in the Asia-Pacific Office, with support by UNESCO and Mahidol University, Thailand. More than 6,000 pieces of artwork in the categories of drawing, graphic design, and photography were submitted for the national level contests, of which 55 per cent and 60 per cent were submitted by youth and females respectively. At the end of the national contests in April 2022, 98 pieces of artwork from participating countries were nominated for the regional-level contest and were posted in a dedicated website for public voting until the end of August 2022.

The artworks for the regional-level contest were independently evaluated by all National Ozone Unit (NOUs), a Regional Judging Committee consisting of representatives from UNEP, UNESCO, Mahidol University, as well as one youth representative and one vision artist from Thailand. The final winners were determined by combining the votes of the NOUs, the Regional Judging Committee and over 27,000 votes from the general public.

During the one-year period when the Contest took place, UNEP and its partners organized a series of awareness and outreach activities, both nationally and regionally, to promote the contest to the public. OzonAction, in cooperation with Mahidol University, developed media toolkits using a variety of formats including images, banners, posters, and instructional videos, and disseminated them through Facebook, TikTok, Twitter and a dedicated website. Support from the NOUs in participating countries has also been a driving force for this success. NOUs in a number of countries created their own and/or adopted UNEP’s material into their local languages. The Ozone2Climate website (www.ozone2climate.org) was specifically developed to promote the contest, receive artwork submissions, and facilitate the voting process. The website attracted over 36,000 unique visitors from 113 different countries around the world.

‘UNEP OzonAction enthusiastically applauds each and every one of the artists – both those who won the awards, as well as all of the other entrants – for the creativity, beauty, diversity and impactful messages of their artwork. Such exceptional visual messages are a powerful means for communicating the message that all of us have a role to play in protecting our environment by addressing ozone depletion and climate change. Through pens, paint, camera lenses, and digital software, these artists are encouraging and inspiring fellow citizens to take action and support the Montreal Protocol. UNEP will proudly share this beautiful art with other regions and outreach it globally through various knowledge products, website, and events’, said Mr James Curlin, Head of UNEP OzonAction.

Ms Rika Yorozu, Head of Executive Office and Regional Programme Coordinator of UNESCO Asia and Pacific Regional Bureau for Education, said, ‘UNESCO Bangkok is delighted by the outcome of the Asia-Pacific Regional Ozone2Climate Art Contest, as we can see different reflections of ozone protection expressed by creators across the region. Such creativity for peace and sustainable development is at the heart of UNESCO's mission, and we warmly congratulate all winning contributors, just as we extend our heartiest thanks to all participants for their creative and compelling submissions’!

A number of countries are rewarding the winners of their national contest during the World Ozone Day celebrations to be held by their countries respectively. The national winner whose artwork received an award at the regional level will also be given a certificate and trophy for their excellent artwork.

Ms Dechen Tsering, UNEP Regional Director for Asia and the Pacific, congratulated the winners, stating that ‘All of the artwork is very impressive, inspiring and hopeful – this includes both the winning entries and the other submissions’.

To see a list of winners, please refer to the attached file below or visit the Hall of Fame of the contest platform.