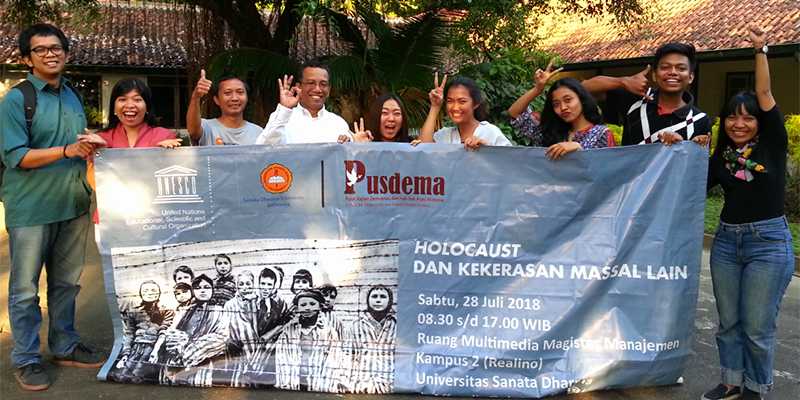 Interview with Baskara T. Wardaya on education about the Holocaust and genocide in Indonesia

Baskara T. Wardaya is the director of the Centre for Democracy and Human Rights Studies (PUSDEMA) at Sanata Dharma University in Yogyakarta, Indonesia. In December 2017, he participated with Juharyanto from the State University of Malang, East Java, and Kartika Pratiwi from Kotakhitam Forum, Yogyakarta, Indonesia in the second International Conference on Education and the Holocaust (ICEH). The team was also joined by Tintin Kartini from the Center for Development of Early Childhood and Community Education West Java under the Ministry of Education. With support of UNESCO and the U.S. Holocaust Memorial Museum (link is external) (USHMM), the team has consequently developed a series of workshops on education about the Holocaust and genocide for Indonesian teachers. The first workshop was held on 28 July 2018 at Sanata Dharma University.

Why is it important to teach and learn about the Holocaust and genocide in Indonesia?

In Indonesia, the Holocaust is a topic that is rarely discussed in public, in the media, or among academics. Indonesians have very little access to resources related to this topic and there are very few Indonesian academics, who are experts in this field. In general, the knowledge about and the interest in the history of the Second World War and the genocide of the Jewish people is rather limited.

As educators, we cannot afford to let an unspeakable atrocity like that slip from human collective memory. The Holocaust was one of the darkest chapters in human history. It is important that we study this history and draw lessons from it. These lessons, in turn, are very important and useful for teaching and learning about other cases of genocide and human rights violations, including those that took place in Indonesia. In 1965, between 500.000 to 1.000.000 Indonesian civilians were victims of mass killings, because they were allegedly supporting communist ideas.

Until today, there is a strong general resistance toward any discourse about these past human rights abuses in Indonesia. Attempts of dealing with the past are usually met by a strong opposition. This affects particularly survivors and victims, whose perspectives are often neglected. In addition to that, strong anti-Israeli and anti-Jewish sentiments are unfortunately quite present in Indonesia.

This is why it is very important for us Indonesians to learn about the Holocaust. We need to teach and learn not only what happened, but also why and how it happened, who was involved, and what was its long-term impact. Learning about this devastating event can help us to draw lessons that are important to face our own violent past and problems in the Indonesian society today.

How does your project contribute to the advancement of education about the Holocaust and genocide in Indonesia?

With our project we aim to help Indonesians, especially teachers, to be more familiar with topics related to the Holocaust and other cases of human rights abuses. To achieve this, we are organizing two workshops for teachers at Sanata Dharma University, Yogyakarta. The first workshop took place on 28 July 2018. During this workshop, we introduced participants to the history of the Holocaust and provided detailed background information on its context and its social, political, religious and personal dimensions. We also provided teaching materials tailored to teaching and learning about the Holocaust in Indonesian schools and addressing the challenging human rights situation in Indonesia. We have encouraged the participants of the first workshop to integrate these materials and new insights into their own lessons.

The second workshop that we will organize in October 2018, will give teachers the opportunity to share and reflect upon their experiences. There will be time to discuss classroom practices related to teach about the Holocaust and other human rights issues.

We hope that our workshops will allow teachers to better inform their students about these important topics and to generate interest to learn more about them and their relevance today.

How did you help workshop participants to approach the topic?

We used different approaches to involve teachers in our workshop sessions. For example through personal stories: when we were in Washington to attend the International Conference on Education and the Holocaust (ICEH), we were introduced to Alfred Munzer, who survived the Holocaust as a child, because he was hidden by an Indonesian family that was living in the Netherlands. During the workshop, we used his story to illustrate how the history of the Holocaust can be connected to Indonesia in unexpected ways. We screened a documentary about Alfred Munzer that shows how he harbors a strong emotional connection to Indonesia until today.

To further link lessons from the history of the Holocaust to Indonesia, we also discussed the human rights violations that took place in Indonesia in the 1960s. Many of the lessons from the Holocaust, like the dangers of propaganda and scapegoating certain demographic groups, can also be applied to our national violent past.

Through discussing and creating a deeper understanding of these two historical events, we hope to motivate teachers to share this knowledge with their students. For this reason, we also provided the participating teachers with teaching materials and methodologies to help them build their own lesson plans.

The feedback we have received from workshop participants reveals that there is a great motivation to put this new knowledge into practice. After the workshop, one teacher said: “As an educator I have a moral obligation to teach my students about the Holocaust and other cases of human rights violations that took place in the past.”  Another workshop participant pointed out that “a tragic event like the Holocaust can happen anywhere. Because of that we need to learn about the Holocaust [and from its lessons]. We need to teach our students, as part of the younger generation, to prepare for a better life together.”

What do you hope to achieve with your project?

We think that it is relevant for learners in Indonesia and across the world to learn about the Holocaust, even if their country has not been directly affected by these historical events. Such education can help learners to understand that the genocide of the Jewish people was a tragedy that reached far beyond its victims and perpetrators and from which we have to draw lessons for all of humanity. We hope that our project contributes to that. We aim to help high school teachers and students ”to become proactive contributors to a more peaceful, tolerant, inclusive and secure world." This is one of the objectives of Global Citizenship Education and part of the Education 2030 Agenda.

We also hope to raise awareness for the violence that shook Indonesia in the 1960s and the ways it has marked Indonesian society. We hope that a better understanding of this past will sensitize learners to recognize similar patterns in the future and to prevent such events from happening again.

How has the support of UNESCO and the USHMM been beneficial for the success of your project?

UNESCO and the USHMM are two internationally known and highly-respected institutions. Both institutions have been a great support from the beginning of our project: from first initiating the idea of holding a workshop on Holocaust education in Indonesia during the 2017 ICEH to supporting the implementation of our project today.

The ICEH helped us to realize that education about the Holocaust and genocide can be implemented on a global level and that there are many education leaders around the world engaged in the same topics as us. That was a highly motivating experience.

We are also very grateful for the financial support we have received from UNESCO and the USHMM and the international leverage both institutions provide to us. Thanks to all of this, we can show that what we are doing here at our center at Sanata Dharma University in Indonesia is part of a global initiative that prepares young people to understand themselves as members of a common humanity, who work collectively for a better future.