WOMEN MAKE THE NEWS 2016: No back steps for journalist going from rural roots to conflict reporting 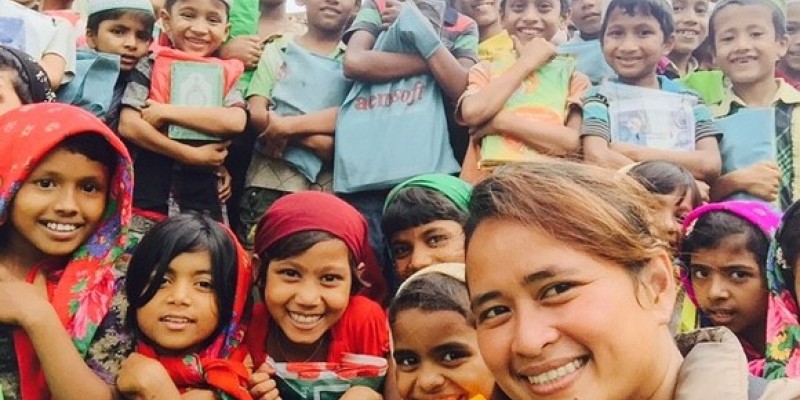 WOMEN MAKE THE NEWS 2016: No back steps for journalist going from rural roots to conflict reporting

UNESCO Bangkok interviewed Thapanee Ietsrichai as part of the Women Make the News 2016 campaign to spotlight the work of a woman in Asia-Pacific media who has overcome gender disparities to excel in the typically male dominated world of disaster and conflict reporting.

Thapanee Ietsrichai has become one of Thailand’s best known journalists, reporting from the immediate aftermath of some of the Asia-Pacific’s most devastating natural disasters and in areas where members of the media often fear for their lives.

Her work has become internationally recognized and she recently won a Media Award from Amnesty International Thailand; all of this, however, was beyond the realm of her imagined possibilities growing up in a rural part of Thailand’s southern Songkhla province. “When I was young, as an upcountry girl, I had no [journalists] to look up to,” she says.

The traits that would make her such an effective reporter were nonetheless evident from a young age. “I enjoyed being a school leader and loved public speaking and any kind of communication,” says Thapanee, whose reportage for Channel 3 recently earned her a Media Award from Amnesty International Thailand.

Thapanee, now 38, went to university in Bangkok and said that she was still undecided on a career path when she accepted her first job as a radio reporter for INN in 2000. Her indecision did not last long.

“I have loved being a news reporter since the first day I started my job,” she said. “I love to learn new lessons, discover unknown issues, [go on] journeys and talk to people.”

Fifteen years later and Thapanee has covered harrowing scenes in conflict zones and following major disasters. One of her proudest professional accomplishments came in the aftermath of the 2011 tsunami and earthquake disaster when she spent two weeks tracking down Thai victims who went missing in Sendai.

Finding them and being able to relay the news that they were alive to their family was a joy in a line of work that often has few of them. Most of the time, Thapanee says, it’s about getting into places that others don’t and telling the stories that others aren’t telling.

“A clear objective is essential. To give an example, in a disaster situation, the reporter needs to get into the place as quickly as possible to report the trouble and what people need, so they can be assisted in time,” she said.

The same holds true when it comes to conflict reporting. “The only way to report the truth is getting into the area to talk, and understand the situation by myself.”

By telling the stories of ethnic minorities, she hopes to challenge uninformed stereotypes. “For example, some Thai people have negative attitudes about the Rohingya, so I travelled to Myanmar to cover their story so that I could have a true understanding of the society.”

Thapanee says that there are many more jobs open to women now than when she first became a journalist as the industry gets larger, but that the scope of what they can cover narrows by subject matter.

“It isn’t easy to be a female reporter in Thailand. There are so many challenges and [much] needs to be proven,” she says.

Women who want to report on topics such as conflicts and disasters must make themselves “the first choice” she says.

Thapanee credits her own success to being confident, always learning from experiences and, most importantly, moving forward, regardless of the challenges. “I don’t care if there is any obstacle, social pressure, sanction or any threat,” she says. “All I focus is my destination to get the only truth and report.”

In line with the call to action for UNESCO’s Women Make the News initiative, Thapanee agrees that more women are needed in journalism.

“We need more female reporters, especially in the fields that are related to children, women, social problems, human rights and conflicts,” she says. Thapanee says that women are often empathetic and skilled at problem solving, both valuable traits in humanitarian and disaster contexts.

To girls and young women who aspire to become a journalist, Thapanee says that they must be ready to deal with challenges such as family issues, but that first and foremost they must “have a news reporter’s heart”.

“To be a news reporter require a very high tolerance and responsibility. You need to read a lot. You should know [what’s] happening in Thailand and in the world,” she says. “And if you have to cover a story, you have to [seek] information and details no matter how hard it is.”