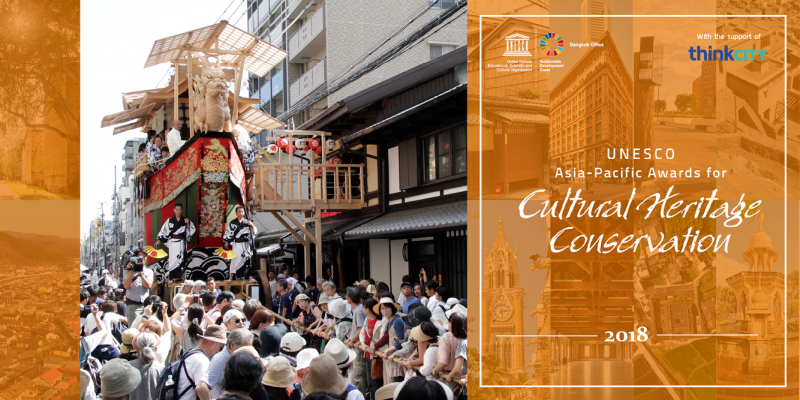 The renewal of the early 20th-century Shijo-cho Ofune-hoko Float Machiya has received the Award of Excellence in this year’s UNESCO Asia-Pacific Awards for Cultural Heritage Conservation. Ten projects from five countries – Australia, China, India, Japan and Thailand – have been recognized by an international Jury of conservation experts in this year’s Awards. The Jury met in August in Penang, Malaysia to review 41 entries from eight countries across the Asia-Pacific region.

The Jury praised the Award of Excellence winner, the Shijo-cho Ofune-hoko Float Machiya, for “celebrating Kyoto culture through the safeguarding of the city’s endangered wooden townhouse typology as well as the iconic annual Gion Festival. The meticulously restored building today houses the Ofune-hoko float, itself resurrected after a 150-year hiatus to regain its place of pride in the annual ritual parade. The project sets a model for its seamless approach to safeguarding built heritage intertwined with intangible cultural heritage in a mutually enriching way.”

The UNESCO Asia-Pacific Awards for Cultural Heritage Conservation programme recognizes the efforts of private individuals and organizations that have successfully conserved structures and buildings of heritage value in the region. The Awards aim to encourage other property owners to undertake conservation projects within their communities, either independently or by seeking public-private partnerships. Awarded projects reflect a clear understanding and application of various criteria, such as the understanding of the place, technical achievement, and the project’s social and policy impact.

‘Ever since the Awards programme was established in 2000, we have witnessed major strides in cultural heritage conservation over the past twenty years,’ said Dr Duong Bich Hanh, Chair of the Jury and Chief of UNESCO Bangkok’s Culture Unit. ‘This year’s projects show the heightened level of public awareness, policy support and private sector investment in an ever-widening range of heritage typologies. It is notable how the 2018 Awards winners showcase the increasing recognition of industrial heritage in the Asia-Pacific region.”

The upcoming year 2019 marks the 20th anniversary of the Awards, with a regional event planned in Penang, Malaysia, where the Awards programme was originally launched. It will provide a platform to reflect on the past two decades of the Awards and the larger realm of heritage in the Asia-Pacific region, as well as to engage in a strategic forward-looking dialogue on the role and contribution of cultural heritage more broadly. Past winners, Jury members, heritage conservation professionals, academics, and private and public partners will be invited. Interest individuals are requested to communicate with UNESCO Bangkok via contacts shared below.

The event will be organized in collaboration with Malaysia’s urban regeneration organization Think City. UNESCO Bangkok and Think City have signed a three-year partnership spanning 2018 to 2020 in order to promote outstanding practices in cultural heritage preservation in Asia and the Pacific. Information about Think City and their broad range of work can be found at:www.thinkcity.com.my

Call for Entries for the 2019 UNESCO Awards will be made at the end of 2018, and further details will be available on the awards website.