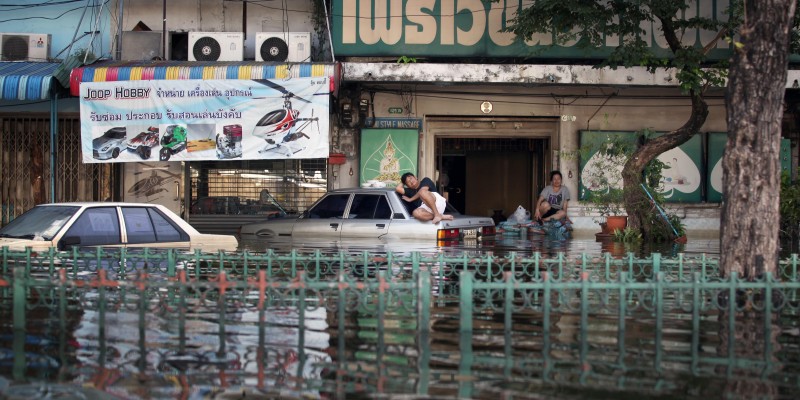 The floods are further proof that natural disasters are getting increasingly severe as climate change advances, and they underscore the urgent need for improved water resources management and disaster risk reduction.

Scientists and policy-makers from ASEAN member states gathered in Bangkok for a timely meeting to promote capacity building in using satellite-based rainfall estimation products to plan for and manage water-related natural disasters as well as to strengthen research collaboration through the ASEAN academic network.

Two experts from the CHRS at the University of California, Irvine, joined the workshop for hands-on training in the use of PERSIANN-CCS, a satellite-based software product that offers near real-time (within 30 minutes) precipitation estimates, with a high spatial resolution (four kilometres), enabling users to visualize hourly precipitation accumulation.

On the first day of the training, Professor Kuo-Lin Hsu from the CHRS presented PERSIANN-CCS and PERSIANN-Climate Data Record (PERSIANN-CDR), which provides rainfall data from 1983 to close to the present day.

The floods in Southern Thailand were used to demonstrate the capabilities of the PERSIANN-CCS system, with an animation showing how the system tracked hourly accumulations of clouds around that time.

Professor Phu Nguyen from the CHRS demonstrated CHRS RainSphere, the desktop version of iRain (see box) and the CHRS Data Portal. Precipitation data, such as average precipitation by month and year from 1983 by country and region, can be found through CHRS RainSphere and all PERSIANN products through the CHRS Data Portal. A technical session followed on bias adjustment of satellite-based precipitation estimation using gauge observation.

The following days of the workshop incorporated Q&A and feedback sessions, with suggestions including potential future workshops on drought analysis and monitoring using PERSIANN-CDR. Participants also presented regional research on climate change and uncertainty in hydrology and meteorology, disaster management as well as satellite-based rainfall applications.

The workshop was proposed by UNESCO under the International Hydrological Programme (IHP)’s Global Network on Water and Development Information for Arid Land (G-WADI).