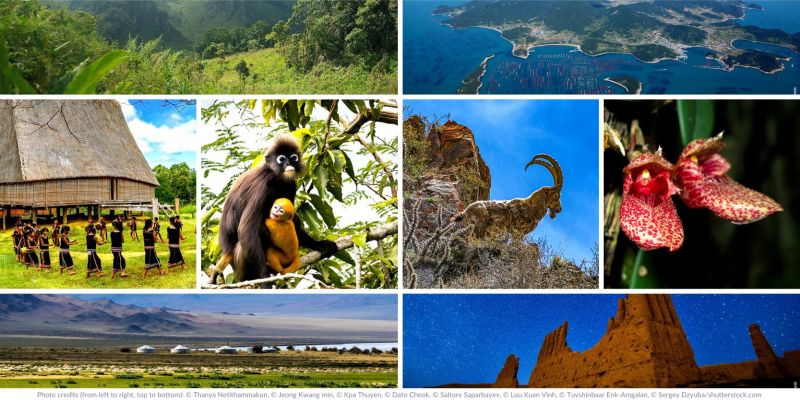 On 15 September 2021, UNESCO announced the addition of 20 new biosphere reserves to its World Network of Biosphere Reserves, 8 of which are in the Asia-Pacific. The 20 reserves are distributed across 21 countries worldwide, bringing the collective number of UNESCO biosphere reserves to 727 in 131 countries, including 22 trans-boundary sites. Through its global network of biosphere reserves, which now collectively account for more than 5 per cent of the Earth’s landmass, UNESCO supports biodiversity conservation, environmental education, ecosystem research and sustainable development. The biosphere reserve network also supports, since 1971, local and indigenous communities in combating the loss of biodiversity with long-term and non-invasive strategies for sustaining the environment.

The International Coordinating Council of UNESCO’s Man and the Biosphere Programme met in the Nigerian capital of Abuja, from 13 to 17 September 2021, MAB’s 50th anniversary. The council named the 20 new global sites along with extending or re-zoning two existing biosphere reserves. Through the MAB programme’s continual addition of biosphere reserves to its World Network, UNESCO is helping countries achieve the 2030 Agenda target of reserving 30 per cent of the planet as environmentally protected areas.

The 8 new biosphere reserve sites in the Asia-Pacific include:

Located in the northern part of the Tien Shan mountain system, Kolsai Kolderi features unique landscapes of steppes that rise to the iced peaks of the alpine belt, canyons, rivers and scenic lakes framed by coniferous and deciduous forests. Kolsai Kolderi is home to many rare and endangered species and covers an area of 242,085 ha and is bordered to the south by Kyrgyzstan’s Issyk-Kul Biosphere Reserve.

Located at the Southernmost tip of the Korean Peninsula, the Wando Archipelago comprises 265 islands, only 55 of which are inhabited by a total of some 50,000 people. Evergreen broad-leaf forests cover the mountain slopes and stretch along the coasts of Wando, which feature a variety of ecosystems including salt marshes, rocky habitats, sandy areas, tidal flats, and intertidal and sub-littoral zones extending into the sea, which hosts an equally rich diversity of marine wildlife.

Situated on Penang Island, in a global biodiversity ‘hotspot’, this biosphere reserve covers a surface area of 12,481 ha including 5,196 ha of marine areas, and features Malaysia’s only meromictic lake, one whose bottom layer of seawater is covered by a layer of freshwater. The rare ecosystem is home to fragile and threatened aquatic species. The habitats of Penang Hill Biosphere similarly support a wide range of floral and faunal diversity, including endemic and endangered species.

Situated on the border of the Russian Federation, the 335,000 ha Uvs Lake, the largest in Mongolia, is encircled by the semi-arid foothills of the southern Altay Mountains and boasts a flat shallow basin, qualifying it as a natural salt lake.

The Uvs Lake Depression constitutes a core area of the Altay Sayan global eco-region, and is part of a newly designated transboundary biosphere reserve bridging two entire biomes of the Siberian taïga and the Mongolian steppes. The site provides habitat to emblematic species and brings together Uvs Nuur Basin Biosphere Reserve on the Mongolian side, with Ubsunorskaya Kotlovina Biosphere Reserve on the Russian side, both of which were designated in 1997.

Doi Chiang Dao Biosphere Reserve is located in Chiang Dao District of Chiang Mai Province in Thailand. It is the only region in the country to be covered with sub-alpine vegetation characteristic of the Himalayas and parts of southern China. Many rare, endangered or vulnerable species live in the 85,909 ha biosphere reserve, and the landscape abounds with limestone caves formed by the infiltration of rainwater, Chiang Dao Cave qualifying as the largest and most important among them. The cave is associated in Thailand with the legend of Chao Luang Chiang Dao, the king of all spirits, who is believed to reside in the towering Doi Chiang Dao mountain; both are revered as sacred places.

Lower Amudarya State Biosphere Reserve (LABR) in Uzbekistan is located in the northern part of the lower reaches of the River Amudarya, southeast of the former coast of the Aral Sea. The site is one of the largest areas of natural Tugai in Central Asia, which is a unique and threatened ecosystem. The area provides an important habitat for plant and animal life and contains the highest biodiversity in the desert regions of Central Asia.

The 106.646,45 ha Nui Chua Biosphere Reserve encompasses the terrestrial and marine areas of Ninh Thuan Province and is located at the end of the Truong Son Mountain Range where the climate characterized by sunny, hot and arid weather and minimal rainfall. The area boasts a rich and diverse mosaic of ecosystems characteristic of the south-central region of Viet Nam

Kon ha Nung is located in the highlands of Central Viet Nam, the so called ‘Roof of Indochina’, the highest peak of which reaches over 1,700 m. and extends over 413,511.67 ha and is home to some 413,511 inhabitants. The biosphere reserve is also home to rare species and is managed in line with the traditional knowledge of local communities, including Indigenous knowledge pertaining to production and social organization. A local people’s committee formulates policies concerning land and forest allocations to households, payment for forest ecosystem services and the development of sustainable ecotourism.

For more extensive information on these sites and their biodiversity and sustainable management:

Geology
Ecosystems and Biodiversity
Together for Peace