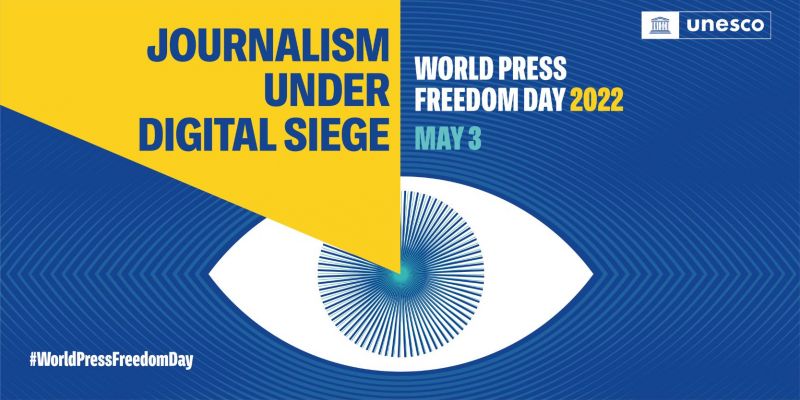 ‘Most media organizations in Thailand have the feeling that the government is watching them every day. Their perception, whether or not substantiated by actual evidence, guides their conduct.’

Speakers and panelists who participated in the UNESCO-sponsored webinar, ‘Journalism under digital siege’, held on 3 May in commemoration of World Press Freedom Day, all shared a common and concerning perspective: the perception and understanding of what constitutes ‘freedom of expression’ can vary considerably in the Asia-Pacific region depending upon one’s professional and social contexts. In addition, concepts of ‘disinformation’ and ‘fake news’ continue to lack clear definition. Such slippery terms and contextual variables can result in misunderstanding and instability not only within the media industry itself, but in greater society. 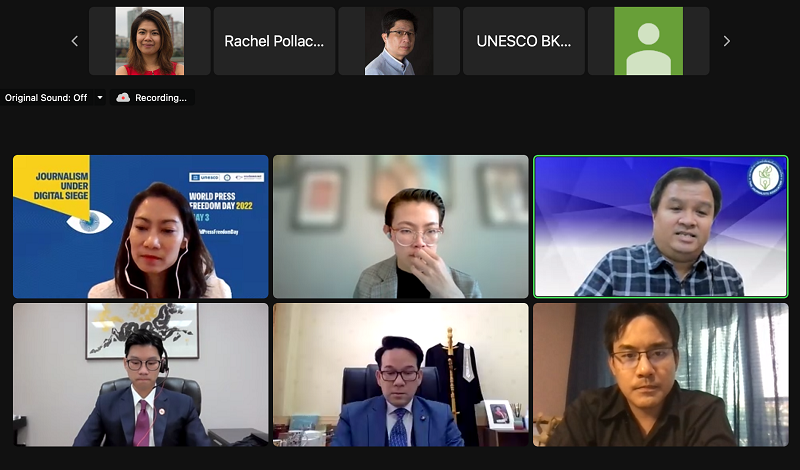 In South-East Asia, media professionals are increasingly challenged by the impact of digital technology on freedom of the press and their overall business viability. And new rules arising recently from legislative frameworks that seek to control the digital environment can also present new difficulties. According to the UNESCO report, World Trends on Freedom of Expression and Media Development, between 2016 and 2020, ad revenue for newspapers dropped by 50 per cent, while on the other hand, Google and Meta (formerly Facebook) represented half of all digital ads spent. During the same time frame, 85 per cent of the world’s population experienced a decline of press freedom, while the number of imprisoned journalists increased from 280 in 2020 to 293 in 2021, including 26 journalists within a year in Myanmar alone. Despite such disturbing developments, one positive note is that access to information laws are now present in 152 countries, a sign of progress in what most experts agree is an otherwise dire situation at present.

Multiple barriers – such as online surveillance and limitations on covering protest movements – hampering professional journalists have given rise to a new breed of citizen reporters and independent individuals, many of whom can more easily skirt such restrictions. Mr Yingcheep Atchamont, of iLaw, described a situation in 2021 when more than 100 protests took place in Thailand and professional journalists found themselves being pushed out of the events. The problem? They were easy to identify as ‘journalists’ by repressive security forces. As Mr Atchamont pointed out, while mainstream media is eminently transparent in their practice, such journalists are, paradoxically, more subject to prohibitions.

Associate Professor Dr Preeda Akarachantachote, Head of the Faculty of Communication Arts at Chulalongkorn University, confirmed the rising number of challenges facing professional journalists today, commenting, ‘As an educational institution we must adapt to new contexts and the changing media landscape. This is an opportunity for us to review the important role of communication and journalism. Today there are many factors that are obstructing and hindering our freedom in the field of media and communication’.

The fundamental question is: do current problems in Thailand result from an inappropriate legal framework, or are they caused by a misinterpretation of the law? 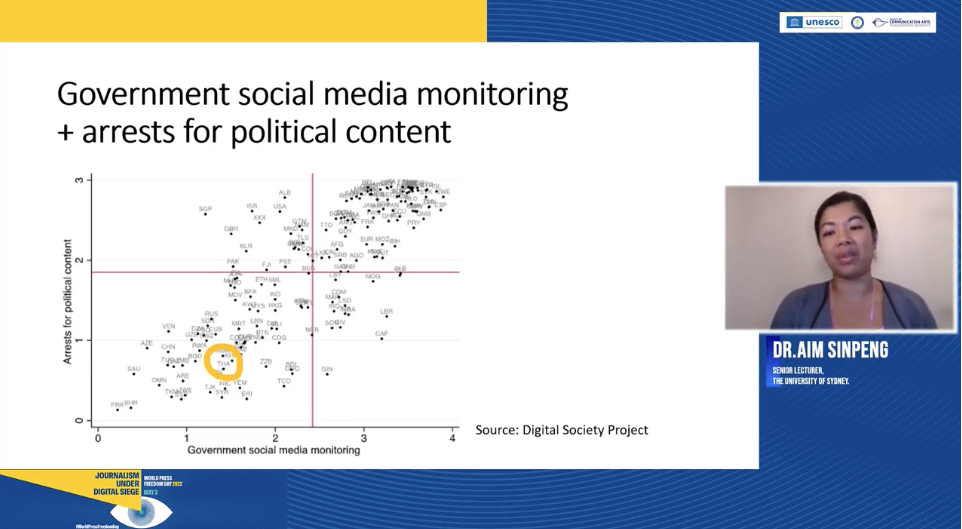 While the media is often depicted as a struggling industry, the response of Thai digital media toward an increasingly autocratic environment is surprising. According to Dr Aim Sinpeng, Senior Lecturer in Comparative Politics in the Department of Government and International Relations at The University of Sydney, 25 per cent of media organizations had their content removed by government, tech companies, or through self-censorship when their contents were deemed too politically sensitive; nonetheless, these organizations also managed to continue posting contents targeting sensitive issues, such as human rights, politics, gender, or health. Notably, the continued inclusion of ‘hot button issues’ did not lead to loss of revenue for the companies. In her keynote address, Dr Sinpeng emphasized that it should not be forgotten that ‘press freedom’, however problematic, is strongly tied to sustainable business models and financial capital. Media viability equals media freedom. To sustain a free and transparent press, she encouraged media professionals to adopt the ‘Three Cs’: Content, Collaboration, and Courage. She also elaborated on several elements that such professionals should consider for improving their own resilience: pro-bono legal assistance, contacts at social media networks, and knowledge of content policies.

‘Fake news’ in the context of Thai legislation

The purpose of our agency is not to control the work of journalists. As technology advances, disinformation spreads rapidly. It is important to have a coordinating agency between the government sector and the general public to perform fact-checking of online information, especially in connection to issues such as food, drugs and the environment.

In 2020, a UNESCO report highlighted that online media contents and disinformation in Thailand were often dealt with a protectionist approach by the government. Arguments based on maintaining social stability and order, as well as ensuring citizens’ cyber safety are indeed often cited as justification for digital content monitoring. The use of such digital surveillance is also commonly presented as a legitimate means to ensure national security.

Across South-East Asian countries, the rise of ‘fake news’ and other kinds of disinformation in recent years has provided government agencies with yet another incentive to monitor online contents more systematically, as well as accelerate the enactment and expansion of ‘anti-fake news’ legislation, especially over the past decade, and more particularly since the emergence of the COVID-19 pandemic.

According to Dr Janjira Sombatpoonsiri, a research associate at the German Institute of Global and Area Studies, ‘The truth is that most countries are still struggling to find a credible balance between news media coverage and what the government considers objective and neutral reporting, as positions on these mattes may well differ. Legislative and executive authorities should clarify that, because they are not the owners of information, and laws and regulations should not be used to suppress various kinds of expression and as tools to prosecute people who think differently on the internet’. Dr Sombatpoonsiri sums up her caveats succinctly in noting that ‘The verification of information is undoubtedly important for public health security, but the inappropriate application of certain regulations can threaten freedom of expression’.

Public prosecutor Dr Mark Charoenwong regards the latest version of the Constitution of the Kingdom of Thailand, of 2017, a regression from its predecessor of 2007, as the latter which prohibited censorship and other interventions intending to control the media. According to Dr Charoenwong, the positive aspect of the current constitution is that it allows media institutions to receive government subsidies. He concluded that in general, however, Thailand’s current legal framework is less protective of freedom of expression than it once was, and there are ongoing problems today related to the misinterpretation and misuse of the law. He cautions, ‘We need to think of how we should deal with those law enforcement officers and practitioners who abuse the interpretation and implementation of the law’.

According to the most recent data provided by UNESCO, South-East Asia is one of the most challenging regions in the world for journalists and media professionals to freely and safely conduct their work. Alarmingly, between 2016 and 2020 in the greater Asia-Pacific, the number of killed journalists rose by 30 per cent. Close to 9 out of 10 killings remain judicially unresolved. In an information era strongly characterized by disinformation and fake news, journalists are facing an increasing number of online threats and harassment clearly aimed at intimidating them.

The ‘Journalism under digital siege’ webinar was organized in partnership with the Faculty of Communication Arts, Chulalongkorn University, and Data Hatch, on 3 May 2022, in Bangkok. 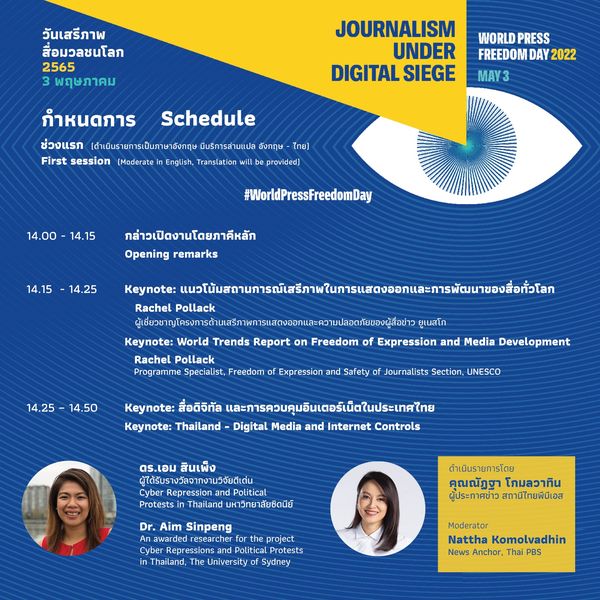 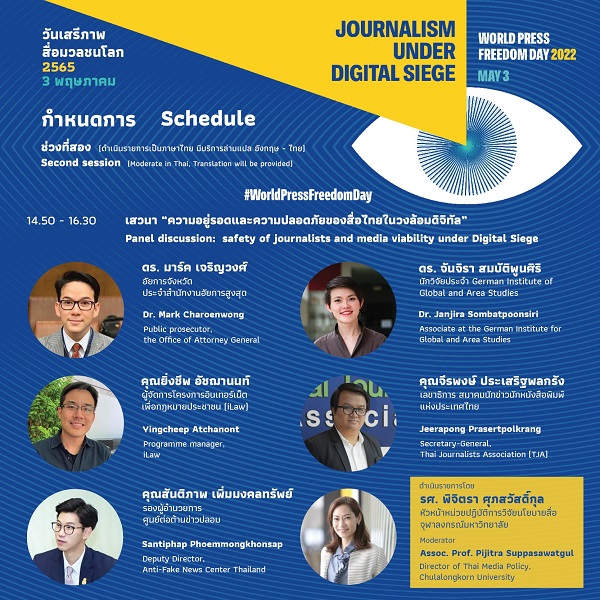