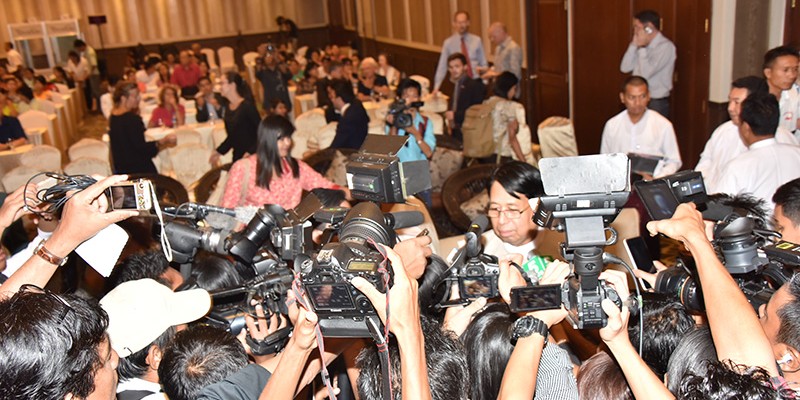 UNESCO has trained 45 Spokespersons on media relations through a workshop held at the capital city of Nay Pyi Taw on June 20-22, 2016. The workshop, which covered media relations, social media for public information work, issue management/crisis communication, and handling media interviews/media appearances in news and current affairs programs, was attended by Permanent Secretaries and Director Generals from 21 Ministries and 3 Government Agencies.

The activity is part of the continuing public information reform initiatives of the newly-elected government of President Htin Kyaw and State Counsellor Daw Aung San Suu Kyi. During his opening address, Union Minister of Information Dr. Pe Myint emphasized that government spokespersons play a key role in the country’s democratic transition and initiatives toward greater public transparency. The Minister highlighted the importance of keeping an open dialogue between the Government and the media and making relevant information from each Ministry easily accessible for journalists. Referring to the News Media Law, the Minister said that “the right to access official information is included in the provisions of the law and it needs to be implemented by all the Ministries, government agencies and public institutions”.

UNESCO Myanmar Head of Office, Mr. Sardar Umar Alam, reminded the participants that Freedom of Expression and Right to Information are fundamental human rights in a democratic society. He reiterated UNESCO’s commitment to work with the Ministry of Information and the media community in pursuing media development.

The three-day workshop was facilitated by the president of the Asian Institute of Journalism and Communication, Mr Ramon G. Tuazon, and it combined both theoretical and practical sessions. The programme included case studies, simulated exercises, role playing, and lecture-discussions. Mr Tuazon was assisted by the public relations expert Ms Alma Tuason and Ms Naing Naing Aye of the UNESCO Myanmar office.

Participants gave positive feedback about the workshop, sharing how they gained more confidence in performing their work. One commented, “All parts of the seminar were very interesting. Role playing and the comments provided after were useful.” Another noted, “Challenges for spokespersons and how to handle media interviews were very useful and interesting for me.”

This activity is part of the EU funded project that aims at Supporting Media Development in the context of Democratic Reforms and Peace Building Initiatives in Myanmar.