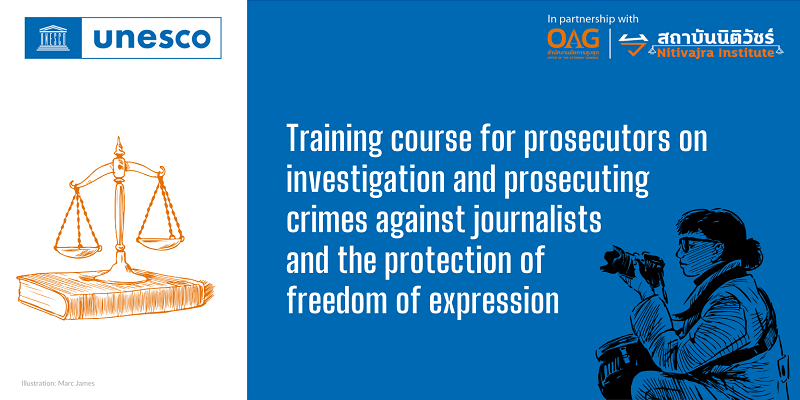 In collaboration with the Office of the Attorney General of Bangkok, UNESCO has concluded a national training course for prosecutors titled “Training course for prosecutors on investigating and prosecuting crimes against journalists and the protection of freedom of expression”. The 3-day workshop took place in Bangkok from 9 to 11 March and covered international standards on freedom of expression and safety of journalists.

The training brought together 30 prosecutors from Bangkok and other regions and created an opportunity for open dialogues among different stakeholders, including Thai journalists. The workshop particularly underlined the crucial role of prosecutors’ efforts not only to end impunity and ensure the rule of law, but also to protect freedom of expression as a fundamental human right. As underlined by Ms. Gita Sabharwal, the Resident Coordinator of the United Nations in Thailand in a tweet about the event: “the judicial system is fundamental to checks and balances in every society. The UN in Thailand recognizes that public prosecutors are at the core of this system and ensuring due process, human rights and rule of law for civil society to flourish”.

As prosecutors, we have a key role in administrating justice and securing public order. However, prosecuting crimes against journalists is more meaningful. We are not only bringing those responsible for a crime to justice but also taking part in upholding freedom of expression, a fundamental right for exercising other rights.

When threats of violence and attacks against journalists are not properly investigated, this leads to more severe aggressions and murders, which is an extreme form of media censorship. This cycle of violence against journalists is often an indicator of the weakening of the rule of law and of the judicial system globally. Independent public prosecutors thus have a crucial role to play in protecting journalists and in ensuring that the rule of law and democracy are respected.

Shigeru Aoyagi
Director of the UNESCO office in Bangkok

In this regard, the training notably built on UNESCO and the International Association of Prosecutors’ Guidelines for Prosecutors on Cases of Crimes Against Journalists, available in 18 languages and recently translated in Thai with the support of the Office of the Attorney General of Thailand. The course, delivered in a series of plenary and workshop sessions, examined constraints and challenges of working conditions of journalists and looked into how the work of journalists and prosecutors is done from each other’s perspective.

For me as a prosecutor, the most interesting part was to raise awareness on the importance to protect journalists and to make them trust in the law system in Thailand. The part that shows the standards in the world and the examples from other countries is an aspect that I haven’t had the opportunity to see during my studies in Thailand.

This training for prosecutors was organized within the framework of UNESCO Judges’ Initiative which, since 2013, has raised the capacities of over 23,000 judicial actors (judges, prosecutors and lawyers) on international and regional standards on freedom of expression, access to information and the safety of journalists in more than 150 countries, notably through a series of Massive Open Online Courses (MOOCs), on-the-ground training and workshops, and the publications of a number of toolkits and guidelines.

The organization of this training was notably supported by the Multi-Donor Programme on Freedom of Expression and Safety of Journalists.