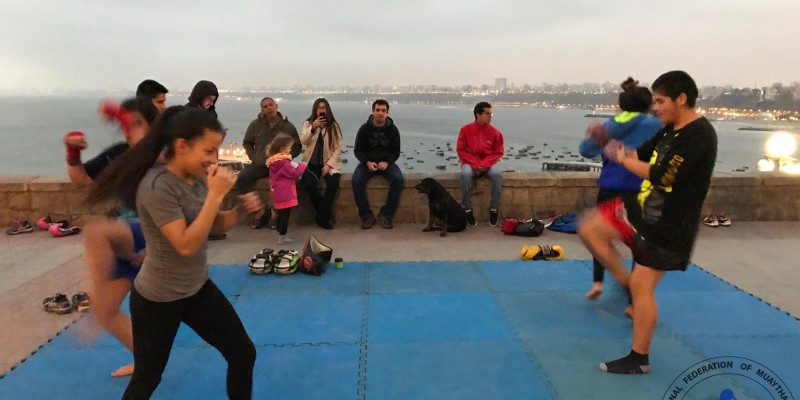 UNESCO is working with the International Federation of Muaythai Amateur (IFMA) to trial a framework that can help measure how sport contributes to the 2030 Agenda for Sustainable Development.

UNESCO consultant Caroline Baxter Tresise and Pearl Managuelod, Secretary-General of the Philippines Muaythai Federation, recently visited Lima, Peru to observe IFMA’s strongest social programmes run by the Peruvian Muaythai Federation and test the new UNESCO Evaluation Framework for Social Projects. The framework is being trialed with IFMA as part of a global MOU between the two organisations.

The Peruvian Muaythai Federation, under the leadership of Mr Rodrigo Jorquera, is now working on adapting the framework locally and is taking steps to align their social programmes under the UNESCO “Transforming Cities through Sport” campaign. The Philippines will be the next country to adapt the framework, launching it as part of a UNESCO youth-oriented sport-edu "Funshop" to take place in Manila, Philippines between 8-10 November.

In a private meeting between Ms Tresise, Peruvian Muaythai General Secretary, Gabriela Kong, and the President of the Department of Sport, Peru, Mr Oscar Fernández, as well as the Vice President, Julia Barrera, the President expressed his support for the initiative and the intention to back the UNESCO-IFMA adaptation of Transforming Cities Through Sport in Peru.

Another meeting with the global NGO, Plan International, took place during the same week in Lima to find opportunities for merging the framework with their existing Safer Cities for Girls campaign. A very successful trial of Muaythai in Plan’s programme was carried out only a couple of days after.

UNESCO’s global cities campaign is one of the first activities to be designed along the Kazan Action Plan, which was adopted by MINEPS VI in July 2017 and represents an international framework for sport policy convergence. IFMA General Secretary, Mr Stephan Fox, who spoke on a panel during MINEPS VI, is a proud supporter of the Action Plan, “It is a great honour to be one of the first sports organisations to implement the Kazan Action Plan. We value our partnership with UNESCO deeply and look forward to the launch of this framework in 2018, which I am sure will greatly enhance our social projects” he said.

Advanced discussions are already underway with the USA Muaythai Federation to include the launch of Sport Is Your Gang Los Angeles as part of the Transforming Cities project, which was confirmed in a meeting in Los Angeles between Vice President of USMF, Ms Marcy Maxwell, gym owner and Pan-American gold medallist, Mr David Huerta, Ms Tresise and Ms Managuelod.

IFMA and UNESCO expect to have an advanced framework before the end of the year which will be available to all Member Federations, with its official launch scheduled for mid-2018 during the World Championships to be held in Cancun, Mexico.

The project is a collaboration between UNESCO Bangkok and the ICM UNESCO Category 2 Centre in Korea.

The original version of this article appeared here.