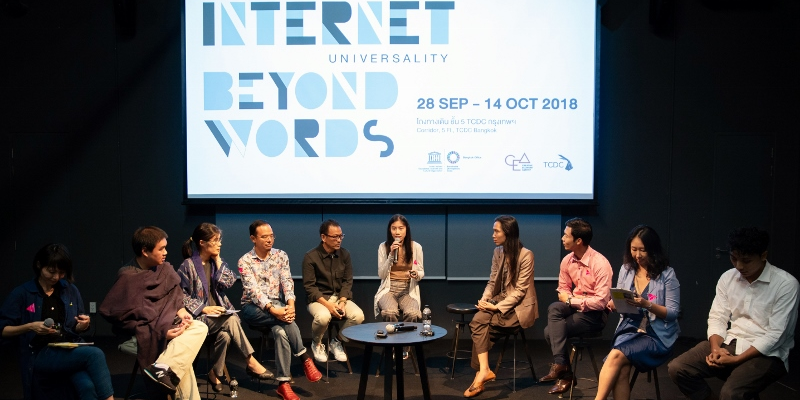 The International Access to Info Day on 28 September featured the exhibition launch ‘Internet Universality Beyond Words’ and a debate on artistic and Internet freedoms in Bangkok. Artists, film directors and UNESCO Communication and Culture experts came together to share the challenges and opportunities they had met along the creation process in Thailand, and discussed on the role of the Internet to positively influence artistic freedom and enhance creativity.

Sali Sasaki, a curator of the exhibition and moderator of the round table, opened the event by highlighting the link between artistic freedom and creativity: ‘Freedom is a universal topic. It has been mobilizing artists and creative minds for a long time of our history. It is undeniable that creativity plays an important role towards achieving freedom in the world.  At the same time, it is important to remember that Internet has an incredible influence on people and society. It changes the way we look at the world.’

The round table started with a discussion on the current situation in Thailand and relationship between local creators and artistic freedom. Duong Bich Hanh, Chief of Culture Unit at UNESCO Bangkok, referred to the 2005 UNESCO Convention for the Protection and Promotion of the Diversity of Cultural Expressions to explicit the notion of artistic freedom. 'Artistic freedom is the freedom to imagine, create and distribute diverse cultural expressions free of interference. It also includes the important right of all people to access to these works.'

Wee Viraporn, Founder and Design Director of Conscious, and Advisor to the Thai Graphic Designers Association, shared his view: ‘From one hand, Internet makes people interact less in real life with each other. On the other hand, Internet helps creative people to share their work without an intermediary, so that they can get the feedback quickly. This is great!’

Pan-ek Ratanaruang, Film Director, reflected on his past work: ‘At the beginning of my career I was making romantic movies and these works were easier to show to the public than the latter work which was dedicated to politics, diversity of opinions and democracy. My friends challenged me by asking about my conviction and certainty on production of this work. Once, when political events happened on the 23rd of June, one of my works that had been screening in the theatre was forbidden the day after. Politics affect our work. Right now we are very careful about what we say or do; we become self-censors.’

Speakers recalled changes brought by the Internet, in part by raising the visibility of art practitioners. The way people get into a profession in the artistic field has also changed. Before, to become a critic, artists had to have experience and proper education; now everyone can be a reviewer.

Siriwat Pokrajen, Documentation Officer at the SEAMEO Regional Centre for Archaeology and Fine Arts, added: ‘With the Internet we can access new ideas and learn about up-to-date things without constraints. I felt anxious, when I noticed how quickly one of my events could be disseminated via social media. But, in my opinion, when the movies or other works are shared online, there is a risk of public dissatisfaction, which you can’t control. To talk from the media perspective, it helps designers to publish their work. You still need media to promote the art you create.’

Anucha Boonyawatant, Thai Independent Film Director and a founder of G-Motif Production, paid attention to the importance of alternative platforms for presenting the work: ‘If I create a film which is beyond the mainstream topics, then cinemas are the wrong places for screening. There is no need for films to be shown only in the cinemas. Internet is the best tool to make your art closer to the audience, that it is why Internet plays an important role for creative directors.’

Nippita Pongern, a student in Communication Design at Chulalongkorn University, emphasized the importance of partnership and cooperation: ‘People in art and design scenes usually do business and they rarely come across social topics. I believe that NGOs and social organizations should reach out to the artists and they, in their turn, should be interested to help because only mutual collaboration can create a positive change in achieving freedoms in the society.’

Misako Ito, Communication and Information Advisor at UNESCO Bangkok, referred to the 2005 Convention on the diversity of cultural expressions as an instrument to support creative industries but also freedom of expression and media diversity, from which both artists and journalists can benefit.

Ms Ito closed the discussion underlining that making universal access to information a reality required action on a variety of fronts. Countries must develop adequate legislation and ensure universal access to the Internet. They must encourage multilingualism online so that all communities can access essential knowledge in their native languages. They must also act to close the digital divide, which tends to perpetuate social and gender inequalities.

The debate was followed by the launch of the exhibition, which comprises six art works from 11 creators:

‘Internet Universality’ by Siriwat Pokrajen - a video documentary on the laws affecting the online freedom of expression.

‘My virtual playground’ by Nippita Pongern - a book series on Internet literacy based on the analysis of behaviours and social interactions on the Internet.

‘The Book of Languages’ by Paphop Kerdsup - a reflection on multilingualism on the Internet, his work illustrates the degree of visibility and invisibility on the Internet based on the languages used.

‘Watch!’ by Wee Viraporn - a sculpture made of images extracted from Thai media raising questions about free flow of information, civic engagement and the role of Internet.

‘Friendship Ended with Mudasir. Now Salmon is my Best Friend’ by Tewprai - a video art piece on memes as a coded language to convey some messages which were prohibited in the past and invite us to reflect about free speech.

‘Artisan 4.0’ by a group of six students from the King Mongkut University of Technology Thonburi - a ‘generation Z’ students' work on the relationship between the Internet and traditional craft practices and a reflection on local skills and knowledge to survive in and benefits from Internet.

The exhibition ‘Internet Universality Beyond Words’ will be open from Tuesday to Sunday from 10:30 am to 9:00 pm until 14 October on the 5th floor of the hallway at the Thailand Creative and Design Center, located in Soi Charoen Krung 34 and can be reached from BTS Saphan Taksin and the Wat Muang Kae pier. Admission is free.