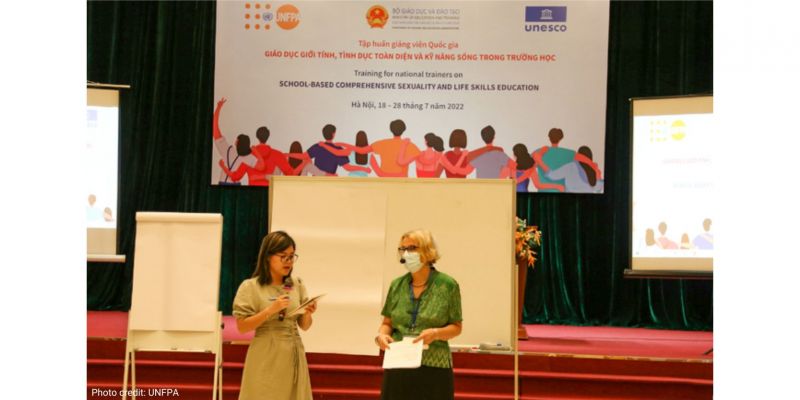 — A 10-day workshop on ‘Training of Trainers (TOT) on comprehensive sexuality and life skills education’ ran from 18 to 27 July in Hanoi. The workshop was jointly supported by United Nations Population Fund (UNFPA) and UNESCO for the Viet Nam Ministry of Education and Training (MOET). —

According to its 2019 population and housing census, Viet Nam has recorded the highest proportion of young people to its total population in the country’s history, suggesting new potential for accelerating current socio-economic growth. To review the numbers, Viet Nam now has 20.4 million youth ranging from 10 to 24 years, accounting for 21 per cent of the nation’s total population.

Evidence indicates that Vietnamese youth are increasingly becoming sexually active at an earlier age. However, they still lack vital knowledge and life-skills to negotiate safe sex and consensual relationships, and they face considerable barriers to accessing social and reproductive health (SRH) services.

Sexuality education for young people remains limited, particularly amongst those who are ethnic minorities, migrants, or residents of rural areas. As a consequence, young people are at risk of early and unintended pregnancies, unsafe abortions, and sexually transmitted infections, including human immunodeficiency virus (HIV).

This highlights the need for sexual and reproductive health information and services for all adolescent youth. The 2021 Sustainable Development Goals (SDGs) survey conducted by the General Statistics Office of Viet Nam in collaboration with UNFPA and UNICEF showed that only 72.2 per cent of married women are satisfied with modern contraceptives, and this percentage drops to 50.3 per cent for unmarried women.

The problem seems to be acute among young people, whose unmet need for family planning is estimated to be four times higher than for married women (10 per cent versus 40 per cent respectively).

Addressing the first day of the training, Mr Vu Minh Duc, Director of the Department of Teachers and Education Administrators, of MOET, stressed that sexuality education is now an integral part of quality education. Students need to be equipped with basic and essential knowledge on comprehensive sexuality education that helps them initially understand sexuality and how to protect themselves from unwanted consequences of their sexual activities.

As Mr Vu Minh Duc stated, ‘The lack of thorough preparation for students on these issues not only leaves them vulnerable to violence and other negative consequences to their health, but it also indicates the failure of responsible people in fulfilling their obligations to the entire new generation’.

After the training, national trainers will support provincial education departments and teachers of secondary schools in three UNFPA-supported provinces of Yen Bai, Khanh Hoa and Vinh Long, as well as other provinces supported by other donors and the national budget to deliver the approved, age-appropriate, culturally-acceptable comprehensive sexuality education (CSE) and learning support environment (LSE). National trainers will also support private education facilities to implement CSE-LSE programmes, if requested.

Ms Naomi Kitahara, UNFPA Representative in Vietnam, expressed her appreciation for the commitment of Viet Nam’s Ministry of Home Affairs, Ministry of Education and Training, and other implementing partners to ensure that young people's right to sexual and reproductive health is respected.

‘Equipping young people with essential knowledge about CSE and LSE will empower them to shape their lives in the way they want. That means that we can reduce risky behaviors of adolescents and youth, while promoting positive, responsible and mature approaches to life’, Ms Kitahara commented at the opening of the workshop.

For many years now, the government of Viet Nam has been interested in ensuring that learners have access to sexuality education, including sexual and reproductive health, HIV prevention, or prevention of gender-based violence. Since 2018, with the support from UNESCO, UNFPA and UNICEF, Viet Nam has developed a holistic approach to the topic that covers a wide range of CSE issues.

According to Mr Christian Manhart, UNESCO Representative to Viet Nam, LSE plays a vital role in promoting the health and well-being of children and young people, in particular girls. Mr. Manhart stated that ‘UNESCO pledges its support to Viet Nam’s Ministry of Education and Training and partners in the national efforts to make sexuality education increasingly comprehensive, and to expand coverage with the aim of reaching all youth at different stages of their education’.

This slightly adapted article was first published by ‘The World and Viet Nam Report’.
A related, earlier version of this article can be found on UNFPA's website.