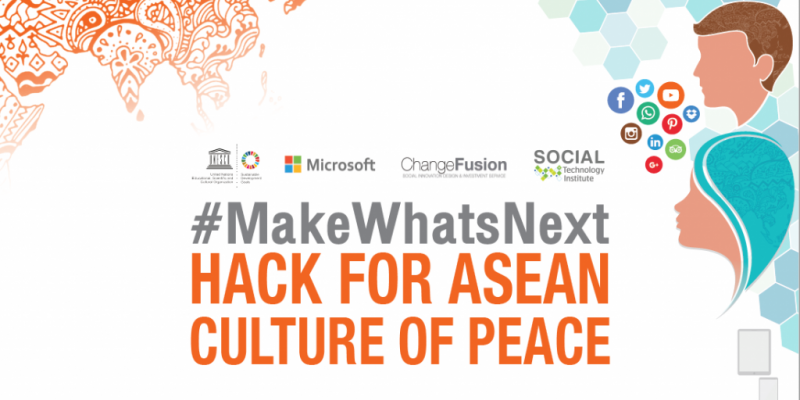 Microsoft (Thailand) joins UNESCO Bangkok and Social Technology Institute to organize UNESCO-Microsoft Hack for ASEAN Culture of Peace from 31 March 2018. The competition aims to uncover the best learning tools developed by Web/Mobile developers, UX/UI designers and IT marketeers under the concept of Shared Histories of South-East Asia.

This year, altogether 15 teams from diverse educational institutes, ranging from highschools to universities, have participated in the contest. On April 1, five Hackathon teams were selected and given fund to develop full-version applications, websites or tools to present at the final round. Only one winning team will receive a trophy awarded by HRH Princess Maha Chakri Sirindhorn on May 21.

This event is a part of UNESCO’s region-wide project to develop a history textbook that can be adapted by all ASEAN countries and can change the way we learn histories. Instead of instilling nationalism and pride of one nation, Shared Histories Education will encourage young generation to grow understanding in cultural diversity, tolerance and critical thinking, which are keys to global culture of peace. It is also in line with Microsoft’s #MakeWhatsNext campaign to increase girls’ involvement in technological development for better livelihood.

The final round of the Hackathon will be on Monday, May 21, 2018, from 10.00 to 14.40 hours at UNESCO Bangkok. There will also be a Press Conference where the winning team will be announced and showcase their product to the press, before it is officially released by UNESCO and Microsoft in later months.

** The event will be conducted in Thai.